After a more than four-hour meeting, the group of artists and intellectuals reached a set of primary agreements with Cuban authorities, although the debate will continue next week. 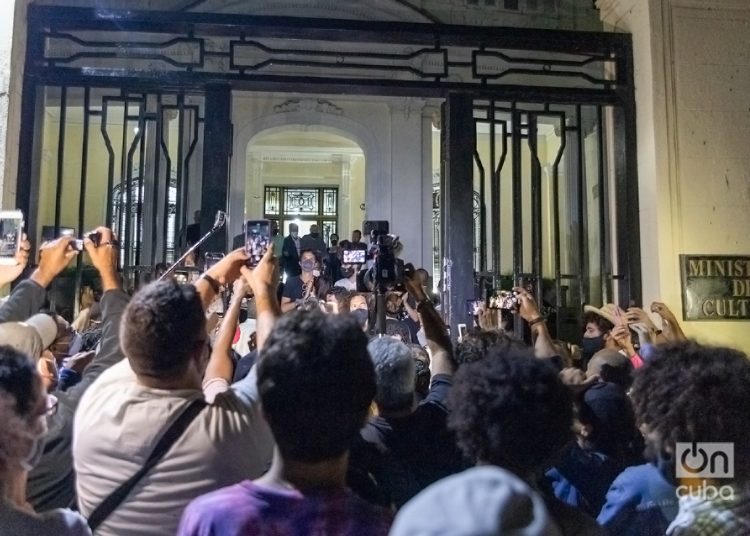 The Cuban artists who gathered on November 27 and until the early hours of today 28 outside the Cuban Ministry of Culture reached a preliminary agreement with the island’s authorities, after a more than four-hour meeting between 30 representatives of the group and government authorities of the sector.

A representation of artists and intellectuals appeared yesterday morning in front of the headquarters of the Cuban Ministry of Culture (MINCULT) in Havana, with the purpose of dialoguing with the minister of the sector and government representatives to demand, among other things, the end of censorship and harassment of artists, freedom of creation and expression, and solidarity with the so-called San Isidro Movement (MSI), made up mostly of independent creators and government opponents.

The group grew throughout the day, reaching more than a hundred in the afternoon and more than 300 at night, many of which stayed until the early hours of the morning awaiting the outcome of the meeting, which for the government was headed by Deputy Minister of MINCULT Fernando Rojas.

The event took place after what happened with the MSI sympathizers and members, who had been in peaceful protest since November 18 and were evicted from their headquarters by police forces, on the grounds that there were violations of the epidemiological protocols established in Cuba due to the COVID-19, since writer and journalist Carlos Manuel Álvarez, who was with them, had recently arrived from abroad.

Among the 32 chosen to dialogue with the government representatives were the winner of the National Film Award Fernando Pérez and actor Jorge Perugorría―who came to MINCULT to support the plaintiffs, as well as other prominent Cuban creators―, plastic artist and opposition activist Tania Bruguera, playwright Yunior García Aguilera and poet Katherine Bisquet, who held a more than four-hour meeting with Deputy Minister Rojas and other authorities in the sphere of culture.

Among the agreements established, the Cuban authorities’ interest in the situation of rapper Denis Solís and independent artist and leader of the MSI Luis Manuel Otero Alcántara stands out; a truce with independent cultural and dialogue spaces, where there is the possibility of meeting without being harassed by Cuban authorities; a multiple work agenda with proposals for cultural themes with Cuban artists from both sides, as well as reviewing the statement of the Hermanos Saiz Association (AHS), issued recently.

Similarly, Bisquet, one of the group’s spokespersons and part of the activists in the strike in San Isidro, said that as of Wednesday of next week, Minister of Culture Alpidio Alonso will meet with the same group, or other people with whom new meetings will be coordinated to discuss other issues that were pending.

“All the points were extremely difficult to negotiate. Some were postponed for next week in the meeting with the minister, others will be debated in independent spaces, so that independent artists have the possibility of presenting their agendas to the Ministry of Culture, and for the latter to hold meetings with their people and connect the two agendas , to achieve a consensus,” said Tania Bruguera at the end of the meeting at dawn on November 28.

Similarly, playwright Yunior García explained that “we are going to continue connected to decide who our representatives should be in those meetings. The group was not closed, it remains open to debate and comments are welcome.”

The Holguin playwright also commented that communication will be maintained on social networks to sustain the debate and reach specific matters for dialogue with the ministry authorities, through a communication line that will be announced soon, through a Facebook page, whose name will soon be announced in networks.

On the other hand, Bisquet pointed out that an official statement will be given on social networks, where everything raised and agreed in this first meeting is explained in detail, so that everyone has access.

The meeting of Cuban artists and intellectuals passed peacefully except for one incident in which, according to some attendees, policemen used tear gas against people who tried to enter the place at the last minute, without causing them physical harm.

The plaintiffs remained calm in front of the MINCULT headquarters, mostly sitting until dawn, applauding periodically first to demand attention and later as a way of confirming to those gathered that they were still there, singing their own songs and classic songs by Silvio Rodríguez, Carlos Varela, Noel Nicola and Santiago Feliú, among other Cuban singers-songwriters, despite a long power cut in the area and warnings from police cordons in the surroundings.

Finally, after reading the final statements, the protesters went home without any police intervention, and with the promise of the cultural authorities that they would not be harassed or detained on the way home.