This will be possible with an application of the island’s Ministry of Justice named iLexMinjus, which can be downloaded from the Cuban store apklis.cu and is designed for mobile devices with Android operating system. 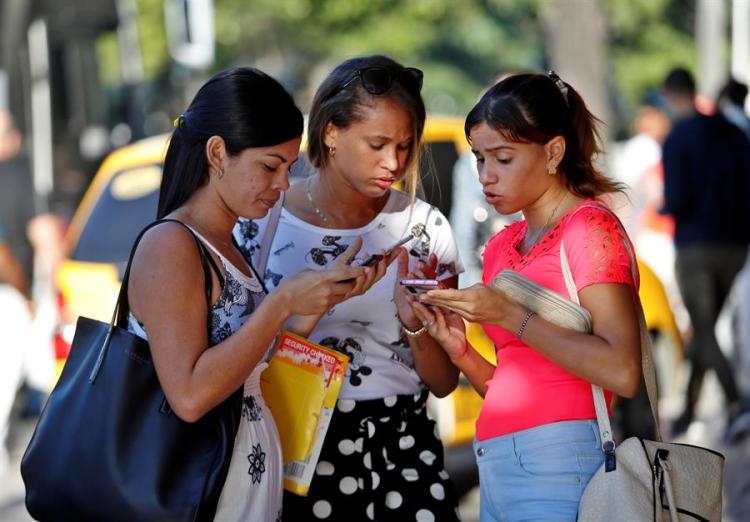 A group of women use their cell phones this Friday, in Havana. Photo: Yander Zamora / EFE.

Cubans will be able to access their criminal records, the registration of wills and the declarations of heirs, through an application for cell phones of the island’s Ministry of Justice (MINJUS), the daily Juventud Rebelde reported.

Pilar Varona, deputy minister of the sector, announced to the press that the application, named iLexMinjus, can be downloaded from the Cuban store apklis.cu, and is designed for mobile devices with Android operating system.

*Caption: Press conference at the Ministry of Justice to launch ILEXMINJUS mobile application

Posted by Ministry of Justice of the Republic of Cuba on Monday, February 10, 2020

The users of iLexMinjus will also have the possibility of sending their concerns and complaints related to the services offered by the MINJUS.

According to the application itself, the requested documents can be collected only at the headquarters of the provincial capitals, and in some municipalities of Mayabeque, Artemisa, Camagüey and Havana, within 72 hours after the request is made.

In order for criminal records to be valid outside of Cuba, the procedures must be carried out only through the International Legal Consultancies, the media specified.

The application was created by developers of the Electronic Government Center (CEGEL) of the University of Computer Science (UCI) in conjunction with the MINJUS, to “disseminate information and provide online services.”

José Miguel Fabra, a CEGEL methodologist, said that new versions of iLexMinjus will be available in the future, which “will take into account user experience.”

The application provides extensive information on the mission, functions and structure of the MINJUS, as well as a directory with the contacts of the ministry’s dependencies.

During the presentation of iLexMinjus, MINJUS authorities also announced the opening of the ministry’s YouTube channel, which will be updated every Wednesday, with legal content of public interest.

Since 2019, the Ministry of Justice has launched several applications such as iLexNotario and iLexReforma, adding to the policy of computerization of Cuban society promoted by the government of President Miguel Díaz-Canel.

In July of that year, legal norms came into force that support “the development and use of Information and Communication Technologies (ICT) by legal entities and individuals,” and are intended to “increase technological sovereignty” and “safeguard the security principles” of Cuban networks and computer services.