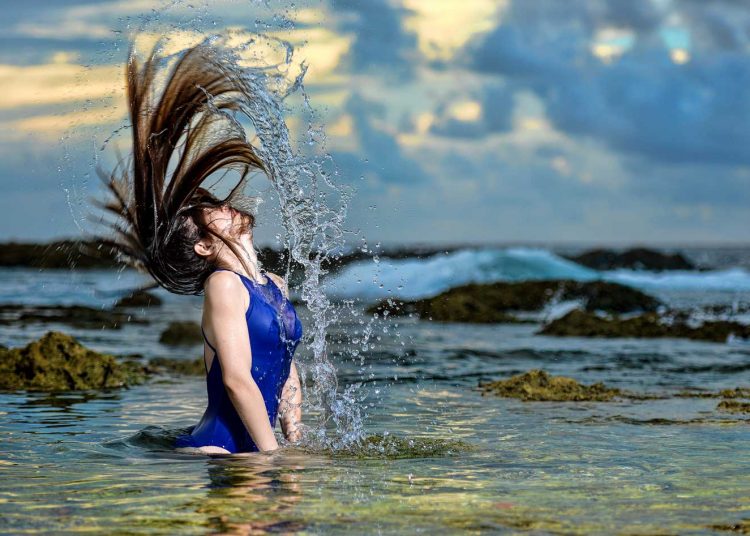 Yusleidy sits atop the back seat of a pink 1953 Plymouth convertible as it cruises down Cienfuegos’ Malecón boulevard, horn blaring and trailing balloons. She’s wearing a fake-diamond tiara, elbow-length white satin gloves, and a strapless green sweetheart ball gown billowing over the car’s rear. She beams like Cinderella on her way to the ball.

It’s Yusleidy’s fiesta de quince—a fifteenth birthday celebration for Cuban girls—and the moment she’s dreamed of since she was tiny, and that her mother has craved since a nurse exclaimed “It’s a girl!”

I watch, enthralled, as a photographer captures Yusleidy posing demurely outside the exuberantly gauche Palacio del Valle. Then, right there in the parking lot, she strips down into swimwear, slips on six-inch rhinestone heels, and the family and photographers’ entourage troop through the lobby of the Hotel Jagua for a more risqué shoot by the pool.

I’m shocked at the overt sexuality as Yusleidy’s ostensibly conservative mom tells her to pop her booty, tug down on her bikini strap, and show more skin.

Clearly this once genteel colonial-era tradition has morphed!

“Los quinces” coming-of-age parties—the equivalent of the ‘Sweet Sixteen’ debutante ball in the United States—have been held throughout Latin America for centuries, with each nation observing its own traditions to celebrate a girl’s transition to womanhood. In contemporary Cuba, the ritual stresses female sexuality far more overtly than the chaste rituals stressing purity elsewhere in Latin America or pre-revolutionary Cuba.

Before the Revolution, quinces were mostly celebrated by Cuba’s middle and upper classes, whose daughters upon turning 15 were considered ready for marriage. Families broke the bank to host sumptuous parties at the glorious Havana Hilton or private beach clubs.

After the Revolution, the ritual virtually disappeared with the rejection of the bourgeois, Spanish-U.S. colonial past in favor of socialist egalitarianism and the State’s endorsement of more “authentically Cuban,” Afrocentric Creole traditions. The quinceañeras’ inherent symbolic vanity (she is typically photographed admiring her own beauty in front of a mirror), and the quinces’ lavish opulence and elitist, aristocratic pretentions, clashed with Revolutionary principles. Quince parties became low-key affairs, most often behind closed doors at home.

“When I had my fifteenth birthday party, we never had the tradition of Cinderella dresses worn by quinceañeras today, even though we belonged to the more affluent classes,” recalls 73-year-old sociologist Marta Núñez Sarmiento. “It’s something that has evolved since the Revolution.”

“We were more naïve back then,” adds Migdalia Carballosa Rodríguez, a 51-year-old tour guide. “When I turned fifteen, it had nothing to do with the beginning of sexual life. It was the transition from childhood to adolescence. We couldn’t have boyfriends, so we chose the most handsome boys of the school or neighborhood to accompany us to the waltz. My photos were in black and white. My party had romantic music from the ‘70s and ‘80s. No reggaeton with salacious dancing, like now.”

Ironically, the reemergence of more ostentatious, often over-the-top, and openly sensual celebration coincided with the economic impoverishment of the ‘Special Period’ following the collapse of the Soviet Union. When the Cuban state relaxed its attitudes towards unsanctioned rituals and events, the popularity of quinces exploded. Heretofore low-key fiestas morphed into lavish, luxury-laden quinces owed to a huge increase in disposable income among a large sector of Cubans prospering on economic reforms permitting small-scale private enterprise, and a sharp increase in remittances from the USA since the Obama administration. These, in turn, have fostered the growth of photo and event-planning businesses promoting ever more extravagant quince packages.

“Now everything is more elaborate and expensive. Girls want a professional studio photo album that involves changing clothes eight to ten times, with photos in the most beautiful places, and also a big party that involves renting a place with a buffet. And they want it all recorded on video!” bemoans Carballosa.

The majority of Cuban families can’t afford such luxury. If the family is too poor to organize a big party, a fiesta may be hosted at the girl’s home. But many mothers—in Cuba it is almost always the mother—are prepared to sacrifice their entire life savings for a full-on ritual.

“When I was a young girl, mom bought a piggy bank and said, ‘This is for your quince,’” recalls 29-year-old María Muñoz Orbea. “My parents gradually saved money for years for that special moment. The quince wasn’t just special for me, but also for my mother, who since I was a child always talked to me excitedly about the event, because she herself hadn’t had one. When my big day came, mom told me she felt like she was 15 years old, and was living that moment through me. It was one of the times in my life that I’ve seen the most joy on her face.”

The celebration is more important to the mother than to the girl because the quinceañera’s transition into adulthood transforms her into a potential mother, explains social anthropologist Heidi Harkonen. “This is significant to the girl’s mother. It rewards her fifteen years of effort in raising the girl and makes her a potential grandmother or great grandmother, the respected head of a matrifocal kin group.”

And, adds Harkonen, since motherhood doesn’t require marriage in modern, sexually-at-ease Cuban culture, “The purpose of the Cuban quince ritual is [no longer] to prepare the girl for marriage, but for sexual life—the moment when she is officially allowed to have a boyfriend, and in the process, sexual relations.”

Such modern immodesty is wed to decorous aristocratic traditions that remain. Arriving at her party in a horse-drawn carriage or 1950s convertible, the quinceañera (dressed in her 18th century-style traje colonial) is accompanied by her father (or a boy of her choice, el galán), dressed in tuxedo, and a little girl—la damita—who sprinkles rose petals at her feet. The party begins with an intricately choreographed waltz in which the quinceañera dances around 14 boys (holding roses) and 14 girls (holding candles). As she waltzes around the circle with her father, she collects the flowers and makes a wish as she blows out each candle.

“A few months before the big day, I selected my best friends to practice the waltz at home after school,” recalls Muñoz. “We always looked forward to rehearsal days because the afternoons became parties and jokes, especially when we had to teach my dad to dance. You can imagine the disaster that was, because my dad doesn’t know how to dance. I remember that we moved all the furniture in the room for rehearsals and the neighbors, upon hearing the excitement and the music, came to the window to watch,” she adds, laughing.

“Finally, the big day arrived, we were all very nervous. The party was in the house, because I wanted it that way. About 300 people came. Mom prepared all the food except the birthday cake, which was a huge waterlily with a fountain and candles floating inside, and a doll representing me on top,” Muñoz reminisces. “Mom prepared punch cocktails, one with rum and one without rum. The next day we realized that we’d only served the non-alcoholic drinks because Doris, our mare that had free roam of the house at that time, had gone in the kitchen and drunk the rum punch!”

But it’s the quince photos that are typically viewed as most important. Virtually every Cuban home is adorned with framed images of daughters posing as Wonder Woman, provocatively semi-clad, and in Cinderella dresses portraying the girl as a Spanish royal.

This portrayal of regal wealth has been amplified in recent years. Today’s young generation was raised in the new era of elaborate quinces. They want bigger, more ostentatious fiestas. A nostalgic yearning for the past is now wed to a flaunting of a luxury lifestyle still economically unattainable to most Cubans. In recent years, quince parties have come full circle as a means for communist Cuba’s nuevos ricos to outdo their neighbors. (The most lavish parties tend to be organized by “white” families, since they receive more remittances from abroad and are, as a group, financially privileged.)

Cubans grounded in revolutionary ethics frown on such vulgarity and reverence of Spanish aristocratic symbolism. Nonetheless, the revolution’s egalitarian policies have so reshaped the concept of ‘self’ and social distinction that today Cuban girls of all skin colors and economic levels celebrate this once exclusively white, upper-class ritual.

As Yusleidy’s photo shoot ends, another quinceañera—a beautiful Afro-Cuban—arrives in a two-tone 1956 Dodge Mayfair. She looks like Brandy in Cinderella in her iconic turquoise cosplay costume. I smile, warmed by her radiance, and the undeniable beauty of this real-life fairytale that will end at the stroke of midnight, when she blows out the candle atop her birthday cake.