Visiting Cuba through this academic program allows students to see the complexity of a society full of contradictions, successes and failures, where people get around without Google maps and boil the water they drink, and it offers students the possibility of finding their own research path, according to their curiosity and personal inclinations, all with the aim of turning participants into better researchers and human beings. 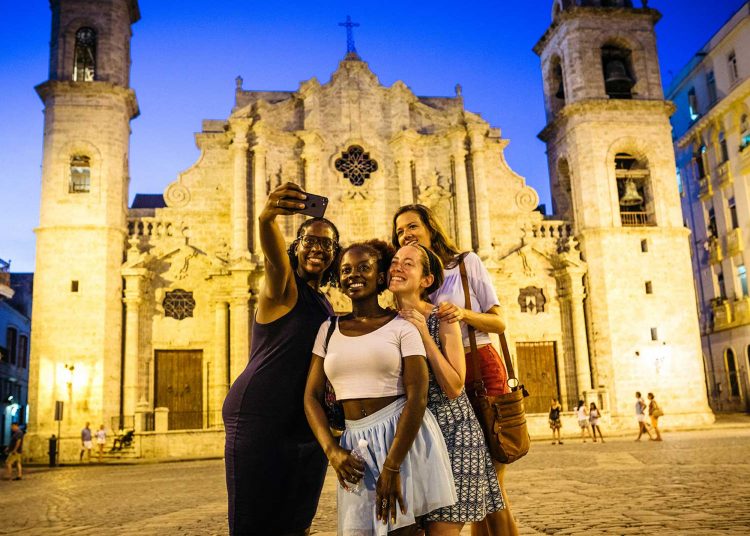 In the third week of participating in the International Field Program in Cuba, Lucía Muñoz sat down to watch the sunset from the Havana seawall. The orange, red, yellow and blue hues on the horizon where the sky meets the sea contrasted with the “black and white” stance she had about Cuba before traveling to the island.

“This range of colors is a rebellion against gross simplifications and partial interpretations. It seems to want to tell me how I should look at the island that stretches under the blanket of the sunset,” she wrote in her notes as a student at The New School in New York City. Two hot summer months in Cuba spent alongside other students and academics were enough to foster an exchange that included intellectuals from prestigious institutions, such as Casa de las Américas and the Juan Marinello Cuban Institute of Cultural Research.

Lucía, a 24-year-old Spaniard, says the experience was stimulating. Every day she read, wrote, and talked with people in the street. Eight weeks were sufficient to no longer view the island from the simple perspective of a tourist, but to briefly but efficiently delve into sociological issues such as diversity, gender, and economic relations. “A combination of the theoretical and the experiential. I think it’s the best way to learn. What I learned in class, later I saw on the street,” says Lucía.

Accustomed to the individualism of New York City, in Havana Lucía found “an overflowing humanity” to which she became addicted, although she regrets not being able to drink tap water like she does in the Big Apple. The combination of personal and academic experiences led her to learn things ranging from a permaculture system1 designed by young Cubans to how a man used condoms to fish from the seawall.

“I saw that this program was focused on research and that it would give me the freedom to carry out fieldwork and have time to discover culture on my own,” she says about the Cuba International Field Program led by Professor Gabriel Vignoli.”

For Lucía, Cuba is a country that is only understood (even partially) if one visits: “The process of understanding this unique country is a constant exercise against the internal tendency of wanting to have only one firm and unwavering opinion about it. Against its idealization, against its demonization,” says Lucia.

Her fellow student, Victoria Heffron, 21, chose the program because it was the only one about Cuba and because of “the independent research projects and the more general course. Music was what struck me most in Cuba. I loved all the live music and musical energy. I was surprised by the great presence of women in Cuban music,” says Victoria, whose research project is about female instrumentalists on the island.

Although what she liked least were the piropos (catcalls) she received on the street, Victoria says she also learned about solidarity and generosity, something that contrasts with other countries where she has traveled.

“Cubans have no problem sharing what they have, even if it’s scarce. I think that selfishness prevails much more outside of Cuba,” she says, and insists that “these exchanges can give a different narrative from the one we always hear about Cuba in the United States.”

For Priscilla Gaona, 21, of New Jersey, being of Ecuadorian origin and Spanish-speaking were important during her stay in Cuba: “As Americans, we have a lot to learn from Cubans, the bravest people I’ve met in my life. There are things we fight to change here, which they’ve already solved in Cuba,” she says.

Priscilla says that she was fascinated by how safe she felt. She was able to walk, at dawn, with a group of six women through a city where, in addition, she got her first tattoo and fell in love. Her connection with the island and Cubans was even spiritual: she was in close contact with Afro-Cuban religion, a practice that has a common origin with her own family’s practices. “I felt my ancestors around me, I even felt my grandfather’s presence with me for a moment.” That experience led her to start her first documentary, a project she’ll prioritize after graduation.

“Many outsiders believe that Cuba is hell, but when you get to know it, you realize the exaggerations. There I learned what love is and what it means to miss someone very much,” says Priscilla, referring to her first trip away from her mother.

According to its website, the objective of the study abroad program in Cuba aims to do exactly that: “…provide a unique research-oriented experience in which lectures and interactions with your peers from different countries provide you with a more in-depth understanding of global problems at play in a specific context.”

Visiting Cuba through this academic program allows students to see the complexity of a society full of contradictions, successes and failures, where people get around without Google maps and boil the water they drink, and it offers students the possibility of finding their own research path, according to their curiosity and personal inclinations, all with the aim of turning participants into better researchers and human beings and, according to the New School, “better citizens of their own countries.” “Cuba changed me completely. That summer was more than an exchange program for me. It was unexpected, but deep,” Priscilla concludes.