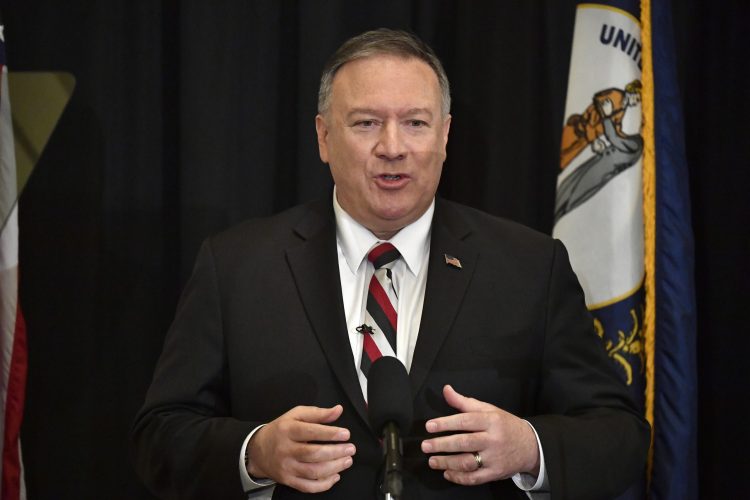 Hours before leaving for London for the 70th anniversary ceremony of the North Atlantic Treaty Organization (NATO), U.S. Secretary of State Mike Pompeo accused Cuba of trying to “hijack” the public protests of recent weeks in Chile and Bolivia to include them in their ideological orbit.

And hours after arriving in the British capital, the Trump administration announced a new package of sanctions against a group of oil tankers transporting crude from Venezuela to the island.

“In just the last few years, we’ve seen some truly remarkable things.  Many nations have made a sharp turn towards democracy and capitalism, good government, away from dictatorship and socialism and the corruption that has been endemic in some of those countries. You see this just in the past few weeks. The Bolivians are rebuilding their democracy even as we sit here today.  No one in the region any longer believes that authoritarianism is the way forward, that it’s the right path, whether you stare at the people in Cuba or in Nicaragua or in Venezuela,” said the secretary of state in a speech at the University of Louisville, Kentucky.

Pompeo said the United States assumes the “moral and strategic” responsibility of making it appear that “authoritarianism in our hemisphere is a threat – it’s a threat to us here in the United States.  We cannot tolerate these regimes inviting bad actors in, and trying to turn allied democracies into dictatorships,” he said.

The secretary of state gave a long explanation of how, in his view, the Trump administration made the decision to roll back the thaw with Cuba established during the administration of Barack Obama “by applying heavy new sanctions.  We’ve recognized that engagement has not improved Cuba’s regime, it hasn’t made it better; the human rights record was worse, the risk to the Cuban people was worse, and the risk to the United States was worse, and their capacity to influence Venezuela even greater.  So we’ve changed that,” Pompeo explained, in a meeting organized by the leader of the Republican majority in the Senate, Mitch McConnell.

The senior official also advocated the reactivation of the Helms-Burton Act last April. “It only makes sense when Americans had their stuff stolen to give them a chance to get it back,” he said.

Pompeo also congratulated the recent expulsion of Cuban doctors practicing in several countries, such as Ecuador, Bolivia and Brazil. “We’ve applauded countries that have expelled Cubans who have come to live as doctors inside of their borders, who were really working on behalf of the [Cuban] government.  These doctors – this was a program that’s hard to fathom sometimes,” said the secretary of state, who implied that Havana “has also [through doctors] tried to hijack legitimate democratic protests in the region for its ideological purposes.”

To continue the rhetoric escalation of the last weeks between the two governments, Cuban Foreign Minister Bruno Rodríguez quickly responded to Pompeo’s words.

“Secretary of State Pompeo lies shamelessly when he attributes to Cuba the just and legitimate protest of the Latin American peoples vs. the savage neo-liberal policies and brutal repression,” Rodríguez wrote on his Twitter account, where he called for a stop to “U.S. domination and intervention in Latin America.”

On the other hand, this Tuesday the Treasury Department announced new sanctions against oil tankers transporting crude oil to Cuba from Venezuela in violation of the U.S. embargo.

The six oil tankers affected are named Esperanza, Luisa Cáceres de Arismendi, Manuela Sáenz, Paramaconi, Terepaima and Yare. As a result, their assets were frozen under U.S. jurisdiction and financial transactions with U.S. entities were prohibited.

According to the Treasury Department, the ships have transported 1.3 million barrels since last summer on behalf of the Cubametales enterprise, which has also been sanctioned. The government entity also said that the proceeds of this traffic have been transferred to a Russian bank, which it did not identify.

Deputy Treasury Secretary Justin Muzinich said that Cuba and the old Maduro regime continue trying to avoid sanctions by changing the names of ships and facilitating the movement of oil from Venezuela to Cuba, and highlighted the corrupt mechanisms used to transfer oil to the Cuban regime in exchange for intelligence and security assistance, one of the remaining sources of support for the former and illegitimate Maduro regime in Venezuela.

Meanwhile, the European Union (EU) has hired several U.S. lawyers to help it face the lawsuits against European companies in the framework of the application of the Helms-Burton Act, the U.S.-Cuba Trade and Economic Council revealed.

The intention is that the lawyers prepare so-called “court friendly” statements assuming the defense of each legal claim against a company based in Europe which, until the beginning of December, already amounted to nine. The European Union may have to spend $1 million for each lawsuit.