In a televised appearance, the Cuban president also affirmed that the elimination of the dual currency will be one of the measures that will accompany the imminent increase of salaries, without specifying a date or the strategy his government will apply for the unification. 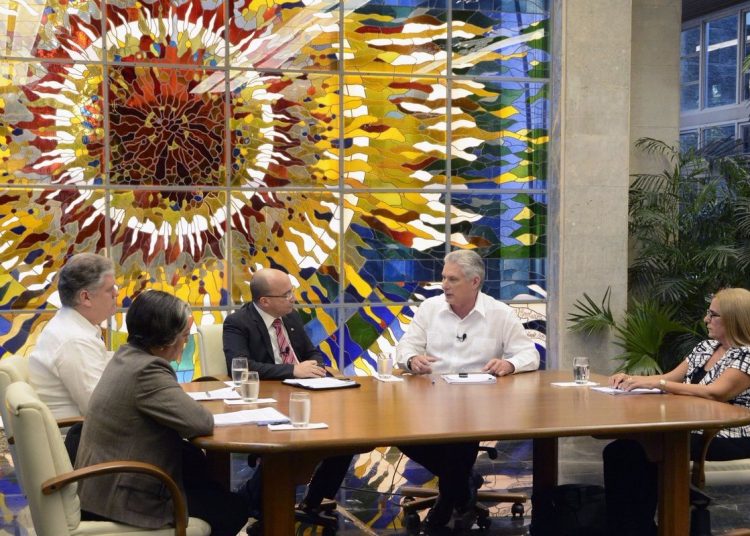 Cuban President Miguel Díaz-Canel (2-r) talks about the increase in salaries and other economic reforms in Cuba in the Mesa Redonda TV program on Tuesday, July 2, 2019. Photo: Estudios Revolución.

Cuban President Miguel Díaz-Canel denied this Tuesday that the imminent and substantial increase in state wages is a populist measure and he affirmed it will be accompanied by other economic reforms, such as the long-awaited elimination of the dual currency.

In an unusual appearance in the evening debate Cuban TV program Mesa Redonda, the president said that the increase in wages, that will benefit starting this month more than 2.7 million public workers, “has nothing to do with populism.”

Díaz-Canel thus responded to “the attacks of some who have never been interested in the people’s well-being,” referring to the critical voices that, mainly from social networks, considered that it was a populist measure to quell the growing complaints over the low wages and high prices of some products in the country.

In Cuba the CUP coexists with the convertible peso (CUC), at parity with the dollar and equivalent to 24 CUP according to the official open exchange rate, a monetary duality that causes distortions in state accounts and that the government has been trying to eliminate for years without being able to find a way to do it to date.

The Cuban president affirmed in his address that the elimination of the dual currency will be one of the measures that will accompany the imminent increase of salaries, without specifying a date or the strategy his Government will apply for the unification.

He also affirmed that Cuba will achieve “prosperity” despite the financial and commercial embargo imposed by the United States and that he hoped to correct the “internal blockade,” referring to productive inefficiency and state agencies’ excessive bureaucracy.

Díaz-Canel said that the impact of the new measures is expected to generate more motivations at work to produce more and better, as well as attaining higher yields and making better use of working hours, because “the country’s entire economy has to be linked.”

Cuban Minister of Economy and Planning Alejandro Gil also took part in the television program to affirm, among other things, that the rise in state salaries will not be accompanied by an increase in prices, arguing that Cuba does not apply the rules of supply and demand of market economies.

The increase in salaries in July will be accompanied by a rise in pensions that are less than 500 pesos (20.8 dollars), which will benefit 1.2 million people with an estimated annual cost of 700 million pesos (29.1 million dollars), according to data previously given by the minister.