The Cuban president spoke about cultural policy in a meeting with intellectuals and officials, prior to the 9th Congress of the Union of Writers and Artists of Cuba. 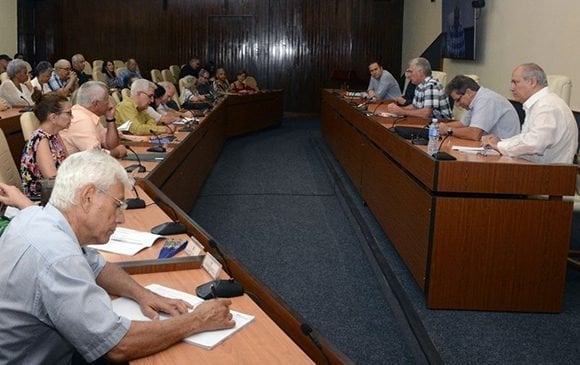 Miguel Díaz-Canel with members of the Organizing Committee of the 9th UNEAC Congress, intellectuals and officials of the Ministry of Culture. Photo: Estudios Revolución.

Cuban President Miguel Díaz-Canel affirmed he doesn’t discriminate against any musical genre, and that what culture officials should be concerned about is the quality of the works.

“It is not a question of genres,” he said at a meeting with intellectuals, representatives of the Ministry of Culture and organizers of the 9th Congress of the Union of Writers and Artists of Cuba (UNEAC), which will take place June 28 to 30 to “evaluate the role of the Cuban artistic vanguard” and discuss, among other topics, the “need to apply a single cultural policy in public spaces” and the relationship between culture and tourism in Cuba.

According to the National Television News (NTV) broadcast, those present also referred to “the United States’ cultural war against Cuba, the defense of national identity, the role of artists and intellectuals and the contribution of the historical leader of the Cuban Revolution, Fidel Castro Ruz.”

Díaz-Canel highlighted the validity of Palabras a los intelectuales, as is known the 1961 speech in which Fidel Castro addressed a group of writers and artists in the National Library, and which has transcended because of the phrase “within the Revolution, everything; against the Revolution, nothing,” which would define the country’s cultural policy.

“I want to recognize, and I think I represent how all the comrades here feel, your commitment and dedication to the Union of Writers and Artists of Cuba and in general to culture, in the midst of so many complex tasks,” said Miguel Barnet, president of the organization, to Díaz-Canel.

“The permanent struggle against the platform of U.S. manipulation”

“I believe that what this Congress can contribute the most is to finding the answers to how we can integrate and face this platform of capitalist and neoliberal restoration that they want to impose on us now.”

The Cuban president defended the need to avoid simplifications in the midst of “the constant struggle against banality and vulgarity” in which the leadership of UNEAC and the Ministry of Culture have been committed.

“I always say it: it’s not a question of genres. There are good boleros and bad boleros; there is good reggaeton and bad reggaeton. I don’t have anything against reggaeton or pop…I don’t pay attention to genres. The question is quality, content. What is good in any genre, and what is bad in any genre?” he said.

And he continued to define concepts: “The question isn’t about the state sector and the non-state sector. There are cultural institutions that promote what is worse, and they are state-run; and there are cultural institutions that do have an exalting, emancipatory, quality programming. There are private public spaces that provide good options, which they do with our institutions and our artists; and there are private spaces that are a disaster,” he concluded.

Díaz-Canel underscored the economic function of culture, an issue addressed in previous UNEAC congresses. “We have to show our culture and we have to achieve that our culture also brings income into the country, even to be used in culture itself. But doing it based on a humanist position not on an unrefined mercantile position, and with social responsibility,” he recommended.

He addressed the relationship between culture and tourism, changing this concept with respect to previous Congresses which emphasized the need to bring culture to hotels and tourist facilities: “I don’t think we have to wear ourselves out in having the best of our art in hotels. What we have to achieve is that the best of our art is on the street, and that the tourist leaves the hotel to participate in that.”

“But that has to be done intelligently,” he said, “there must be coordination, there has to be promotion. For example, just take a look at the cultural events this country organizes, these cultural events should have been full of tourists. And that should be more spontaneous, more normal, more natural. That is a debate we must have,” he said. The meeting was attended by Abel Prieto, Eusebio Leal, Choco, Eslinda Núñez, Israel Rojas, Corina Mestre, Pedro de la Hoz, Guido López-Gavilán, Alex Pausides, Graziella Pogolotti and Lesbia Vent Dumois, among other UNEAC members.