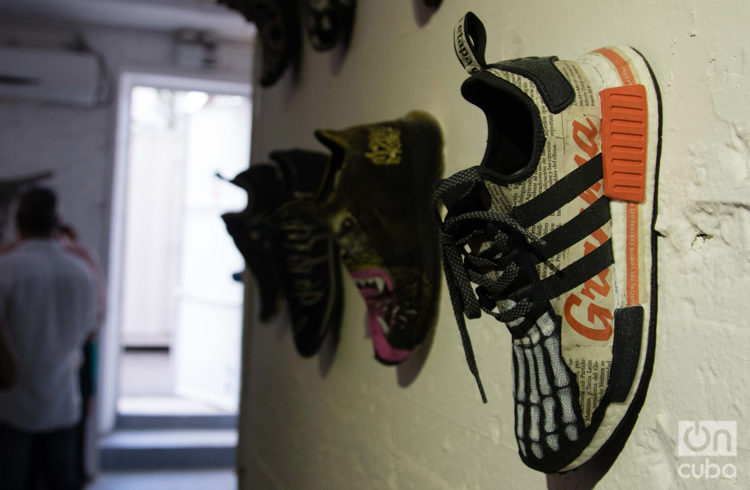 Adidas officially got to Cuba in September 1998, José Miguel Pupo, the current representative of the brand on the island, affirms. That was a moment of splendor for Cuban sports. However, after almost 20 years Cuban sports no longer has the same yields. Now the brand is testing an artistic expression in Cuba, Pupo explains.

How has it done this? Suffice it to visit the Fábrica de Arte Cubano to discover it through an exhibit of 23 local artists, led by Nelson Ponce, who intervened Adidas Originals clothes and footwear especially brought over for this collective work. Inaugurated on May 31, it includes mapping creative video to silk screen printing.

“Here everyone knows that I wore out a pair of shoes, but the climate was not rigid,” Raúl Valdés (Raupa) jokes. “It has been unexpected,” says Michelle Miyares. “It was a process of experimentation and discovery,” Alejandro Romero Rosell describes it. They are three of the participants in the exhibition, and who together with Ponce are among the most renowned Cuban designers.

Adidas Originals Public Relations Manager for Latin America Ana María Garzón said to OnCuba that the entire process began around a year ago. “We came to Cuba to find out how the country is, what Cubans like, especially the young people. We got to know the Fábrica de

Arte and we realized that this was the place where we wanted to be, to exercise certain influence and collaborate. We feel we have much in common.”

“Adidas Originals is very linked to urban culture, to art, to collaboration…and we are always reinventing ourselves. We have a slogan: ‘Original is never finished.’ It will always be in constant change, rethinking itself according to the change of generations, fashion and urban culture in general. We realized that here art is very collaborative and goes hand in hand with that, it’s about reinventing,” she says.

How has this concept been reflected in the case of Cuba?

For me the clearest thing is what has occurred here at the exhibition. We just gave them the canvas, to say it somehow, which was like handing them the footwear. From then onwards it is a project completely of artists and of the FAC. We gave many of them the same shoe, and they have created pieces that are so different! That shows their creativity and goes very well with Originals, which is born of classical silhouettes of sports, which now are reinvented to give place to other new ones.

We placed our trust in the FAC, where the exhibit will remain for three months, and afterwards each artist decides what to do with his work. We realized that X Alfonso and Nelson Ponce were very well up in the Cuban artistic sphere and actually everything has been very much to the point. When we got to Cuba, three days before the inauguration of the expo, we saw it for the first time. We had many expectations and we’re leaving very pleased, wanting to continue doing things here. We knew it was going to be a major artistic display.

“For me,” says Nelson Ponce, “the coordination was super difficult. When you are a coordinator it is complex to reach an agreement with the artists, among them and with the brand. However, I didn’t want my imprint to be left out, beyond the coordination. I worked a lot and I established a general requirement: that they be young artists, but with some experience. Not everyone is suited to work with a global brand like Adidas. You need knowledge about the cultural universe in order to coordinate oneself with the philosophy of the brand, which has worked with singers like Madonna, Katy Perry, among others.

“The second requirement was that the artists be designers with a tendency toward illustration and the use of other expressive resources. I was looking for heterogeneity. That’s why the exhibit has wardrobe designers, graphic designers, designers from both worlds: graphic and textile like Idania [del Río], audiovisual designers like Marcel [Márquez] and Raupa; visual artists like Osy Milián, one of the brand’s ambassadors in Cuba,” says Ponce.

“Artists,” he continues, “always have their worlds, their markets. It’s not common to work jointly as we have done and as we do in Cuba. We had never worked with a brand of this type. The artists have faced something different from what they are used to. It is an unusual experience and they have not faced it naively, but rather in a different way. Cuba is also very singular and, in turn, the brand has faced a peculiar atmosphere, because the representatives did not know the Cuban cultural context.

“That’s why I tried that they be artists who knew each other to guarantee the interaction, the synergy. In addition, they do not go to the exhibition from an elitist position but rather they make multiple interventions in each other’s work. They were the ones who put up the exhibit, and that is done in an environment of collaboration, even when the individuality never fades.”

Ana María Garzón explains that “Adidas has been in Cuba for many years. I feel that it is a very strong presence, it is rooted in Cuban culture, but above all from the sports point of view. The brand has a history in the country based on that aspect. However, we want to develop much more the concept of Originals, which is still not very well known on the island.

“That’s why we think: what do we need to take forward the concept of Originals that is very different from that of the performance – it’s not clothes to practice sports, but rather to dress, fashion clothes. Then we started looking for that place to make known what we are. We looked for a place that believed in the same thing as us: collectivity, creativity, reinventing. Everything pointed to the FAC, and from the first meeting we had it was an instant click; we agreed about everything. We have had to cover many obstacles to get here, but it has really been worthwhile.

“We hope to have a positive impact where the people really search for urban fashion in Cuba, to look for it with us because we feel we are passing on what the people are looking for. When we toured Havana and the FAC in particular, I feel it is exactly the public we are looking for.

“Now our aim is that people get to know us, and I believe that understanding will be instant and that we will have a connection that will continue evolving. We want to maintain the collaboration and that that leads us to establish something as solid as what the performance has achieved.”

Which segment of the public do you want to reach with the most strength?

It’s difficult to say. We’re looking for creative persons. In some cities that is according to very specific ages, but I believe that in Cuba the people continue being creative during a longer lifespan than in other parts. The artists, for example, from 20 to 35, and even almost 40, remain very creative. Here there is a very disruptive culture of urban fashion and it extends the age range.

The Adidas office in Cuba is working directly with us and we come periodically. I’m a public relations person and that’s why I am so concerned about knowing people. We are looking for key persons in each country, who lead us to connect more with the buyer or with the audience. That’s why I have remained so close to this project.