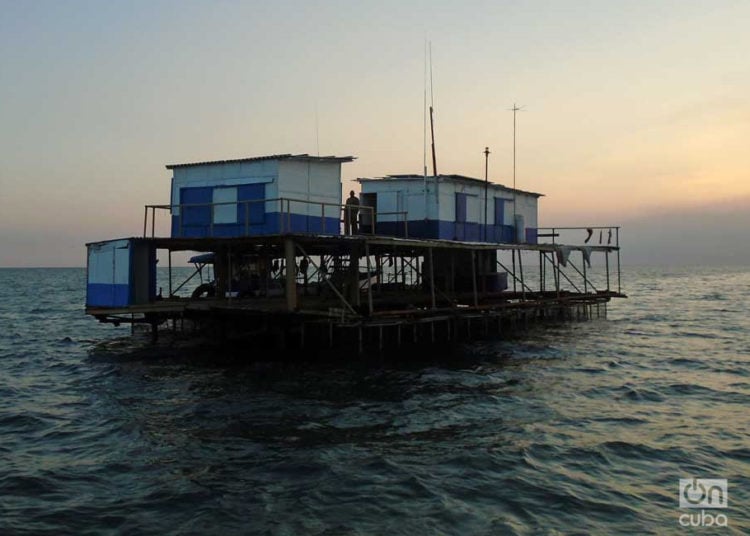 One can see them in the middle of the sea, after several hours of navigation, and the first one does thing is to cross the fingers begging for not even a drop of rain or a storm. But it is known that storms in the Caribbean are as common as seagulls or boats. That is why, before putting the first foot in the dock, one already has the certainty that those who inhabit this sort of small hamlets on piles, in the lower insular platform, do not believe in swells or sharks, either.

They are called “collection centers” and have been there for over 40 years. They are indispensable facilities for lobster fishing, which ensure that these appetizing crustaceans with antennae arrive alive to the industry, and sometimes to restaurants and markets in Europe or Asia.

In the docks and cages submerged in the water, the lobsters catchers deposit the catch of the day, waiting for “the sent ones”, as the great ships in charge of their transfer to port are known. Thus the fishermen of La Coloma – the largest company of its type in Cuba – do not have to waste time in traveling to land from their operation areas, many miles offshore.

They cannot be seen from the shore, neither with the naked eye nor binoculars. You first have to cross the channel, that turbulent stream of four miles wide, and enter the lower platform, halfway between the coasts of Cuba and those of the Isle of Youth, in order to reach them.

Among eight and nine men live permanently in each center, all of them with the assignment of weighing the lobster, classifying and placing it in the cages during the day, and then passing it to “the sent one” during the night.

Whether it is summer or winter, they cannot escape from having to jump into the water to do their job. However, the most difficult thing about his job is not the cold or the storms, but the irremediable distance from almost everything that anyone could miss.