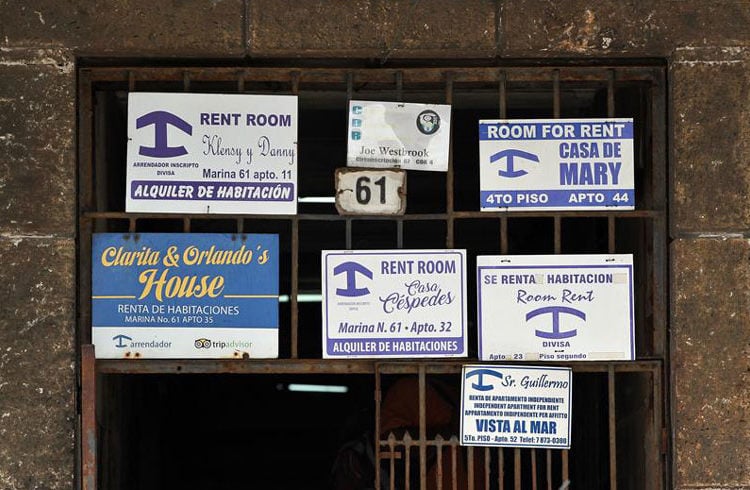 The Cuban government temporarily suspended the handing over of licenses for a group of private work activities, officially called self-employment.

The measure forms part of “a systematic process of checking and perfecting, geared at correcting deficiencies,” reported the island’s First Deputy Minister of Labor and Social Security Marta Elena Feitó.

According to what was published this Tuesday in the Gaceta Oficial Extraordinaria No. 31, until this process concludes “it was decided to not give new authorizations” for some 20 of the activities, among them the rental of homes and rooms; gastronomic services in cafeterias and restaurants (paladares); the swapping and selling and buying of homes; the repair of electronic equipment; and the jewelry business.

However, the Gaceta Oficial specifies that “the workers who at present are authorized to carry out the mentioned activities in the abovementioned sections can continue carrying them out.”

It also specifies that, as a sole transitory provision, the requests for authorization to  carry out the activities now suspended or eliminated, which are in the paperwork stage before the coming into force of the new resolution this August 1, “are governed by what is established in the legal provisions for which they were initiated.”

In statements to the daily Granma, Feitó explained that the measures aim is that “no action remain outside the law.”

A recent assessment of private work in Cuba demonstrated the presence of illegal activities among which the deputy minister cited the use of raw material, materials and equipment of illegal origin; the non-compliance of the payment of taxes and the under declaration of incomes; the imprecisions in the control, and the deficiencies in the economic contracting for providing services or supplying products.

Feitó said that the adopted decisions are in correspondence to what was analyzed in the most recent meeting of the Council of Ministers, and said by President Raúl Castro at the closing session of the most recent meeting of the National Assembly of People’s Power. She commented that in principle “authorizations will not be granted in places where criminal events have been detected.”

In the deputy minister’s opinion, the new measures “are not a roll back in the development of the activity” since “the aim is to consolidate with them the organization and control of self-employment, in such a way that it continues advancing in an organized and efficient way.”

NO DATE BUT WITH CHANGES

The Gaceta Oficial Extraordinaria does not give a tentative date for the culmination of the checking and perfecting of private work. However, Feitó specified to Granma that “once the rest of the necessary legal regulations, among other decisions, are ready, a group of related activities will be put into practice, with which it is sought to reduce the existing dispersion and to perfect their reach.”

The Labor and Social Security deputy minister gave as an example the upcoming implementation of the “beauty service” modality, which will include seven activities of self-employment separated until today: barber, makeup artist, masseur, manicurist, hairdresser, hairdresser combing braids and traditional hairdresser.

“Starting with the grouping together it will be possible to speed up and reduce the administrative paperwork, decrease the documentation, and in turn expand the profile of the activities by offering a more comprehensive service,” she said.

In other cases, an activity still in force will be divided according to its specifications. It is the case of “maker/seller of food and beverages through gastronomic services in restaurants,” based on which two have been designed: “gastronomic service in restaurants” and “bar service and recreation,” whose reach will be defined in the regulations to be published once the reorganization has concluded.

Feitó Cabrera advanced as another of the novelties authorizing the owner of a private business with hired workers the possibility of naming one of these to assume his duties. This will be authorized because of a prolonged sickness, of the owner or his relatives, or because of his leaving the country, in which case “this prerogative will be given for the period of three months.”

In relation to private transportation workers, the modification of the license regulation is planned, “reinstating its municipal, provincial or national reach, as well as the updating of the requirements for its granting,” Déborah Canela Piña, principal specialist at the Ministry of Transportation, specified.

Canela Piña pointed out that the technical inspection of the vehicles, the analysis of the drivers’ records and the organization of the services in route, car pool, terminals or points of embarkation has already started being applied.

For Havana “the association of private transportation workers to the cooperatives created of route taxi drivers and an experiment will be initiated that covers all the vehicles, between four and 14 passengers, who wish to operate on routes of the country’s capital,” the specialist commented.

Those who form part of the experiment will have benefits like buying fuel at differentiated prices to operate, access to the wholesale market to buy tools, parts, spare parts and accessories at retail price minus a discount of 20 percent.

The vehicles and car pools must point out “correctly” the routes, prices and schedules. “The price of the routes will be established by stretches that will not be more than 8 kilometers, with a price of 5 CUP,” Canela Piña affirmed.

PAYING WHAT HAS TO BE PAID AND ON TIME

The perfecting of private work in Cuba also includes modifications in the tax aspect. Vladimir Regueiro Ale, director of incomes of the Ministry of Finances and Prices, explained that the unification of a group of activities and the recognition of others “leads, among other measures, to determining for each case new tax installments.”

“There is an increase of minimum installments in some cases, but also reduction in others,” he advanced.

In the tax for the use of labor force “the minimum tax established by the Tax Law will be applied,” which is 5 percent. In addition, the exemption of payment for the first five workers will be eliminated and a progressive base will be imposed for its calculation, according to the number of hired workers.

Granma specifies that “for the first five workers the tax will be 5 percent of the mean monthly wage corresponding to the province; from the sixth to the tenth it will be applied on the amount resulting from the sum of two mean wages; from the 11th to the 20th on the number of three mean wages; and from 21 onwards six mean wages will be taken as the base for the calculation.”

Regueiro Ale affirmed that “in general, a similar balance has been maintained” between the amount of activities that currently pay taxes by the general regimen and those that do so by the simplified one.

Another novelty will be the “gradual” implementation of the system of fiscal bank accounts. The director of incomes of the Ministry of Finances and Prices said that a group of private workers “will start being demanded the creation of a bank account with fiscal transcendence, in which the operations of incomes and expenditures related to the activity they exercise should be reflected.”

This information will be at the disposition of the National Office of Tax Administration during the entire process of control and verification of the payment of taxes of these workers. The group by which this procedure will be initiated includes home rentals, construction services and gastronomic services in paladares and bars, as well as for the transportation workers only in the case of Havana.

Granma concludes that “putting the house in order” is a “maximum priority” for the Cuban State and affirms that the new measures do not seek “to roll back” private work in Cuba but rather to put an “immediate” stop to those self-employed who “violate the established regulations and get lost in the ins and outs of illegal activities and disorganization.”

According to data given by the daily, at the close of the first semester of the year 567,982 persons exercised work as self-employed in Cuba, which represents 12 percent of the total of the island’s workers. Thirty-two percent of those incorporated to that labor modality are young; 33 percent are women; 16 percent are also linked to some state center; and 11 percent are pensioners.

Beyond these figures, Granma recognizes “the unquestionable validity” of this employment option, to which it attributes an increase in the “supply of goods and services with acceptable levels of quality,” and which allow the Cuban State “to concentrate on important activities for economic development.”

In October 2010 measures started being applied to relax and expand private work in Cuba, authorized on the island since the 1990s. Starting then the allowed activities and the control of their exercise was increased, prohibitions were eliminated for the marketing of new productions and services, and a special regimen of social security was approved for the workers of this sector.

AmeriCuba: U.S. music made in Cuba