Hyperinflation has reached Cuba, and we must try to lower it. But that means boldness and doing away with dogmas. 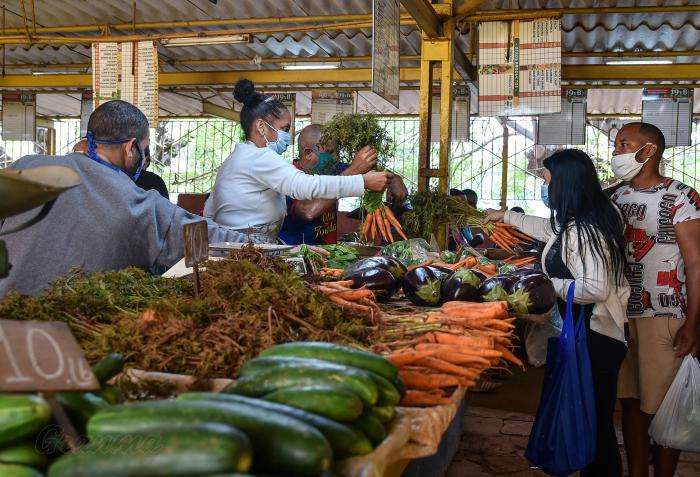 More than a year ago, more precisely on July 2, 2020, I published in Progreso Semanal “La inflación en Cuba: una señal a atender” (Inflation in Cuba: a signal to pay attention to). I don’t know if it was attended to or not, but then the country was far from having the inflation rates it has today.

It is quite complex to have a figure for the real inflation rate in Cuba. Several markets coexist, highly segmented, all with different prices and currencies…. But what is understood by inflation?

Inflation is nothing more than the generalized increase in average prices in a country during a given period of time. Like other economic indicators, they are usually calculated for one year. The inflation rate provides the annual percentage change in consumer prices compared to the previous year.

There are many calculation methods. One consists of establishing a basic basket of products and services necessary for the livelihood of an average household. In the Cuban case, there is a minimum basic basket that is sold monthly to all households, today at prices without subsidies. But their amounts are insufficient to cover the monthly needs of the people. It is estimated that, on average, this basket lasts for about ten days.

The rest of the days of the month are completed with the markets in CUP or freely convertible currency or with the markets of free supply or demand, both agricultural and industrial, and even with the informal markets that satisfy certain needs.

Economic theory holds that it is good for any economy to keep inflation low. A high level of inflation distorts market signals and also creates inefficiencies and makes people’s lives more expensive.

A structural crisis such as the one experienced by the Cuban economy, together with external factors such as the U.S. blockade, the COVID-19 pandemic and the lack of foreign exchange due to imbalances or decreased exports, among others, has affected the supply of goods and services. And it has resulted in an increase in the prices of products in some markets accessed by the population, such as the agricultural and informal markets. But the problems derived from the so-called Task of Reorganization have been added to this hyperinflation.

The inflationary crisis that currently exists in Cuba is nothing new. The country has already gone through a Special Period, derived from the disappearance of the socialist market, when GDP fell by more than 35% during the first years of the 1990s, as well as a decline in exports, added to the shortage of monetary resources due to the cancellation of the credits received from those former socialist economies. Today, however, the moment is more complex.

It is known that at the beginning of the 1990s there was an increase in prices due to the shortage of products and that wages were maintained, although enterprises were paralyzed. That is why the population came to have 73% of monetary liquidity with respect to GDP. That liquidity diminished when Cuba began to reap the fruits of its economic reform. In 2018 that liquidity was 58.9%. Figures that already showed inequality: there was an important group of workers whose income was not enough for basic consumption, among other factors due to the excessive prices in CUC — which are not the product of inflation, since they are stable prices, only stable and high —, and by the increasing price increase in CUP.

The complexity of measuring Cuban inflation lies in the existence of double monetary circulation (Cuban pesos and freely convertible pesos through banks). It is an interesting exercise to see how in October 2021 the consumer price index showed a cumulative 63.4%, while on the same date in 2020 it was 5.17%.

During the Special Period, the exchange rate from the dollar to the Cuban peso reached up to 160 pesos to the dollar in the absence of a formal market — few people received or earned dollars. And that currency was also necessary to buy in the new stores created for this purpose: there were products that were only sold in dollars. With the creation of the CADECAs (exchange houses), the exchange rate, despite ups and downs, stabilized at 24 pesos per dollar. The government decision was to establish that fixed exchange rate.

With the arrival of remittances in increasing amounts, contradictions began to operate again. A part of the population can pay for certain products at hyperinflationary prices, but those who live (survive) on state wages have strongly suffered from those high prices.

In 2021, based on the increase in prices derived from the devaluation of the Cuban peso at the business level due precisely to the Task of Reorganization, and since the scarcity of basic need products is present once again, and the great speculative level, prices have shot up to levels much higher than previous periods.

At the beginning of the new century, the basic food basket of Cubans underwent certain changes. Before, the permanent monthly rationed products per person could be purchased for around 9.05 Cuban pesos — soap, bread, oil, coffee, rice, eggs, chicken meat and beans —, it could be somewhat higher if another product was added.

In 2005 that same basket was worth 17.45 pesos, an increase of 148%. In addition, the rise contrasted with the 8% increase in pensions, 6.72% of the increase in the minimum wage and 11.9% of the increase in the average wage. The new price of the basket only included 2 pounds of rice and an additional two eggs. There was also a price hike for coffee, although in this case the price increase, for the same amount, had been 1.600%. A small bag of mixed coffee started costing about 4 pesos. Before, its price was about 25 centavos.

The basic basket foreseen by the Task of Reorganization was 1,528 CUP. I imagine it was calculated taking into account the official CUP rate at USD 1 per 25. But recently it was reported that this basket now amounted to 3,250 CUP in Havana and 3,057 CUP in the eastern provinces, while the country’s average salary was 3,838 CUP. My colleague Pedro Monreal recently commented that in 2019 the cost of the basic basket represented 46.6% of the salary, but according to the Cuban authorities, in 2021 it is almost 85%.1

The Monetary Reorganization brought with it a significant increase in salaries, but these today represent less purchasing power than the salaries of previous years due to the excessive increase in prices, although one cannot be absolute. A not inconsiderable group of workers are receiving high amounts for the distribution of profits in their institutions.

Let us remember that as society and its components are more developed, the cost of reproduction of the labor force increases. It does not cover only the essentials to feed and clothe workers and their families. It also includes more leisure time, a more guaranteed health, the payment that allows enjoying vacations, going to the theater and the movies, buying books, electrical appliances, etc.

Just as an example, I include here some data, without much sophistication in its calculation, just to demonstrate the exponential increase in prices taking as a point of reference some areas of Havana and Santa Clara. Some products and their prices are appreciated and, above all, the indicator that sets the trend in the country: pork meat. The unit of measurement is expressed in pounds: 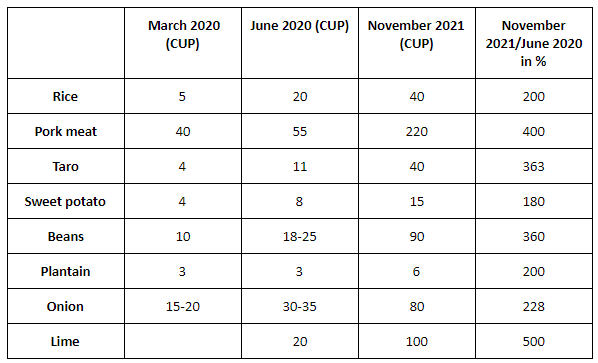 Fruits or vegetables were not added, since it is understood that with only those essential products in the Cuban diet, hyperinflationary prices are demonstrated. In addition, non-luxury items were not included for a Cuban family (let’s say school tennis shoes, which exceed 3,000 CUP) and other clothing that the population needs. Neither cleaning products, among others.

Not all the population can stand on long queues to buy certain products necessary for everyday life: oil, meat, toiletries and cleaning products, which are in short supply. It is a gap that certain intermediaries are occupying to profit from the shortage. Consequently, prices have risen dramatically in that informal market. In another sense, if the State does not sell freely convertible currency and they are only bought in the informal market, those prices of 80 CUP for a freely convertible currency are later reflected in the costs of those who offer goods and services, making the final price higher.

It is only possible to attenuate the current Cuban inflation, which is on the rise, with higher production. For this, it will have to be related to the solutions devised and to the national government plan that has been announced. It is insisted that the obstacles that hold back production be removed, but the results have not yet been seen. As long as decisions are made gradually, the economy continues to decline.

Let’s hope economists are offered the powers given to epidemiologists and health personnel, who have achieved a good management of the health situation in the face of COVID-19. It would be highly desirable that the task of dealing with the economy, mired in a complex structural crisis, could fall into the hands of specialists or that at least some of their proposals were taken into account, regardless of their institutional link in the country or abroad.

The Task of Reorganization and the external situation are leading to a decrease in the purchasing power of society, with the corresponding displeasure that the fact brings with it from the political point of view. The population’s questioning of policy makers continues and will grow each day that the current inflation manifests itself. Economists generally point to two reasons for losing a government: high inflation and high unemployment.

Ultimately, hyperinflation has reached Cuba, and we must try to lower it. But that means boldness and doing away with dogmas. Obviously, the will and the exhortations are not going to solve it. They are economic problems that can only be overcome with economic solutions.