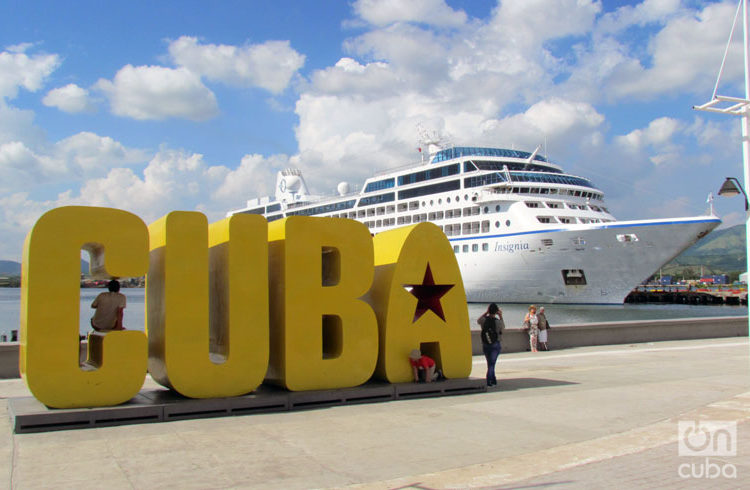 Eight months after its debut with the Cuba destination, Oceania Cruises made a new inaugural journey to the island. On this occasion the shipping line belonging to the U.S. Norwegian Cruise Line Holdings Company arrived for the first time to the ports of Cienfuegos and Santiago de Cuba.

The itinerary, called “Panoramic Caribbean,” took as point of departure the city of Miami, and also included stopovers in Havana – to which the Norwegian cruise ships have traveled during 2017 -, Jamaica and Bahamas before returning to Florida.

The Insignia, one of Oceania’s classic ships, was the one chosen to open a route that starting now will be included in more than 30 of the company’s itineraries until the end of 2019 and which respects the most recent regulations on the island put into force by the U.S. government.

With capacity for 684 guests and appreciated for its high standards in service and comfort, the Insignia skirted the Cuban coasts after leaving Havana on Thursday November 16, precisely on the 498th anniversary of the foundation of the Cuban capital in its current settlement.

While many Havana residents and visitors were waiting for their turn for the traditional going around the Ceiba of the Templete and making for a wish, the ship left the capital’s port after a two-day stay in the city.

While in Havana, its passengers visited from plazas and mansions of the Historic Center to the legendary Tropicana Cabaret, just like the guests of previous Norwegian cruises have been able to do since the arrival of the Marina in early March.

But Cuba is more than Havana, and that’s why the Insignia sailed to the western tip of the island and later headed to the east to tour the south, entering the port of Cienfuegos on November 18 at 7:00 in the morning.

In the so-called Pearl of the South, one of the island’s most beautiful cities whose Historic Center – like that of Havana – was declared a World Heritage Site by UNESCO, the ship’s passengers were able to get to know firsthand the history and culture of Cienfuegos, and visit – if they wished – other nearby sites like the famous valley of Trinidad and Guamá, in the Ciénaga de Zapata.

Representatives of the Havanatur agency, coordinator of the group tours for the Cuban side, commented to OnCuba the intention that visitors not only see the cities and their buildings, but that they also exchange with persons and get to know about the sociocultural projects of the visited communities.

Several of the excursions, like that of the city of Trinidad itself and the mentioned Cienfuegos: art at their fingertips, included the interaction with artists and crafts people, especially those linked to manual works.
In addition, they heard about the sunken treasures of the port, the secrets of the local fishers, and they walked through the streets of Cienfuegos, until the cruise ship left for Santiago already by nightfall.

A bit after noon on November 19, the Insignia crossed the narrow entrance of the Santiago de Cuba bay and minutes later docked in the port of Cuba’s second city in importance, the principal one of the island’s eastern region.

The passengers were received by the intense sun of the “hot land” and the view of the Sierra Maestra mountain range, which hugs the city. Like Cienfuegos, they visited the city and its surrounding areas, among them the town of El Cobre – where the Sanctuary of Our Lady of Charity, Cuba’s patron saint, is located – on a tour organized by the Havanatur agency or, if they preferred, walking on their own along the steep streets of Santiago or taking one of the private taxis, most of them U.S. vintage cars, known in Cuba as “almendrones,” that were waiting for them at the port’s exit.

Víctor, one of the taxi drivers, shared with OnCuba his expectation. “It’s very good that cruise ships come,” he said. “It’s good for us because possible clients who pay well arrive on them, and also good for the city in general, because that improves the economy.”

Wearing a hat and a long-sleeved shirt “to make a good impression,” Víctor repeated his proposal of touring Santiago on his almendrón to all the groups of visitors who left the cruise terminal on foot. He had his reward.

“What’s important is to not despair,” he affirmed. “I hope Trump doesn’t continue making cuts and also takes away from us the cruise ships.”

Víctor’s opinion is shared by other drivers and craftspeople who – in Santiago as well as in Cienfuegos – offered services and merchandise to the recent arrivals. For them, like for other workers from the private sector, the arrival of Americans is an opportunity for their businesses and the restrictions put in place by the Trump administration generate uncertainty. That cruise ships like those of the Norwegian company arrive is then good news.

The Insignia remained anchored in the port of Santiago until Monday November 20. The previous night its passengers had the possibility of experiencing Santiago’s nightlife, in places like the legendary Casa de la Trova or the Tropicana Santiago Cabaret, or in some of the bars or the well-known paladares – private restaurants – of the city.

This experience, together with those of Havana and Cienfuegos, allowed them to approach Cuba and its people with greater intensity.

“We have heard the word ‘excellent’ much more than usual,” Peter Morris, manager of the Insignia’s Destination Services, commented to our publication.

“According to the comments received, the guests are very satisfied with the trip,” he explains. “They say they have had a good time. They speak about the beauty of the cities, about the safety, about the quality of the organized tours, about the guides’ good training; many have even said they would like to return on another occasion. We in the company try to have different perspectives, to offer an increasingly better service, but the opinions have been really very good.”

For Morris, the fact that this is a generalized comment among the visitors is proof of the itinerary’s success. “More so knowing that the trip included new ports and for them it is not their first cruise, most of them have already gone on many trips, and the fact that they showed this interest and said they felt satisfied is something good for our ship and for the company in general,” he affirmed.

Based on that experience, and the success of previous journeys to the island, Morris doesn’t doubt in recommending U.S. citizens that they visit Cuba “and that they so on our ships,” despite the most recent regulations of the Trump government.

“The positive side of these new regulations is that we can continue traveling to Cuba and for our clients it’s relatively simpler because we take care of the paperwork, that everything is in order, and for them no uncertainty is generated,” he said.

“Most of our clients were eager to come, they knew there were no difficulties because our trips comply with the established regulations, so they were ready and interested and according to the comments we got they are leaving Cuba very satisfied.”

From the operational point of view, Peter Morris neither has any complaints. “Everything has been very easy, very organized,” he says. “When planning a trip like this one the possibility that an unforeseen event can occur is always managed, but honestly, everything has gone very well. We have experience in many of the world’s ports, and over here everything has worked out the best way. In general it has been an excellent trip.”

After this successful trip, Oceania Cruises will continue sailing to Cuba. For the rest of 2017 other itineraries are being announced that also include the ports of Havana, Cienfuegos and Santiago de Cuba, like the one called “Hemingway’s Hideaways,” which will also make a stopover in Key West; the “Timeless Cuba,” exclusive for the island; and the “Holidays in the Tropics,” which together with the Cuban destinations contemplate other places like Cozumel (Mexico), Nassau (Bahamas) and Santo Domingo (Dominican Republic).

All these journeys leave from and end in Miami.

For 2018 and 2019, Oceania Cruises has already announced journeys to the island not just on the Insignia but also on other ships like the Regatta and the Sirena. Moreover, Norwegian Cruise Line Holdings is also offering different visits to Cuba in other of its cruise lines like the brand by the same name and Regent Seven Seas Cruises.

Other U.S. cruises companies also travel to Cuba, like Carnival – the first U.S. Company of its type to get to Cuban ports in more than 50 years -, Royal Caribbean and Pearl Seas, which have already programmed journeys for the next months.

According to a recent analysis by Cuban expert José Luis Perelló, up to the close of October some 477,000 foreign visitors had traveled to Cuba on board cruise ships, from the United States as well as from other parts of the world. In the case of the Americans, more than 500,000 arrived on the island in the first 10 months of 2017, many of them on cruises, according to the expert.

TN: Peter Morris’ comments were retranslated from the Spanish.

Chucho Valdés: “I feel as if I were in a second adolescence”