The Coffee of the Sierra 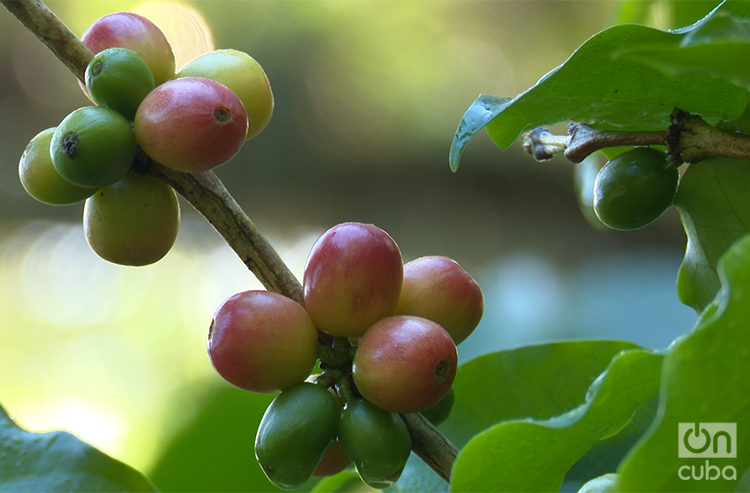 that the rooster’s faraway crowing brings to us in bed”.

Dawn breaks in San Pablo de Yao, in the Sierra Maestra. While the sun rises, the sound of the pestling of coffee announces the start of the daily tasks, the arduous day that starts after the first sip of the black nectar.

The mountain people are fortunate to drink a beverage of the greatest purity. Here, as they say, “coffee goes directly from the plant to the cup.”  However, it is not that simple. The popular infusion is the product of a long process that includes its collection, drying, roasting and grinding, a culture inherited from the French settlers and their slaves who emigrated after the Haitian revolution.

The tradition was depressed for several years. The low prices that the State paid to the coffee growers put it at risk. “But it’s no longer like that,” farmer Humberto Díaz comments satisfied. “Now for every can of prime quality beans we get paid 160 Cuban pesos (equivalent to 6.50 CUC). Even the people who had left the Sierra have returned to grow coffee.”

During the last harvest some private producers were able to sell more than 2,000 cans of the bean, a very significant amount that multiplied their families’ incomes. Thanks to this coffee growing is flourishing again in the mountains and, with it, ways of life and customs that had almost been lost.

In San Pablo de Yao people had started to mix pure coffee with the store’s rationed cafetín,[1] as many usually do in other parts of Cuba. But Yolanda, whose job is to roast the coffee beans to order, affirms that there are few families that continue doing this. “Now there’s more coffee in the Sierra and the people prefer drinking it pure again,” she says with a sense of ownership.

The mountain people from Yao like natural coffee and at times preferably accompanied by homemade farmer cheese. This is one of the customs that have become rooted in recent times, and it has to do with the incipient recovery of another important economic sector: cattle raising.

Little by little, the habit of drinking coffee has been changing. The influence of TV series and foreign films, and the experience of some mountain people abroad, has helped to widen the scope.

“There are some people who have started drinking it with chocolate, with cream or even homemade latte…and some of our families get together in the evenings to have a cup of coffee and talk about our day.” This is said by Mirta Figueredo, a dentistry technician who worked in Venezuela on a mission. Her home has become the meeting place for relatives and neighbors to have the 4 p.m. “small cup of coffee with cinnamon,” a sort of Cuban cappuccino that also includes powdered milk.

This mixture of tradition and modernity, of purity and innovation, today makes enjoying a cup of coffee stand out in that zone. However, if anyone from San Pablo de Yao is asked who makes the best coffee in those places, they will undoubtedly say: “No one can beat Olga at that, compay”.

Olga López Gómez is a farmer who says she practically grew up under the coffee plants.” When I ask her about her secret she confesses in a whisper that the key is the roasting.

She continues doing this task in a pot over a flame fueled by dry wood and vigorously moving the beans with a wooden “mecedor”, exactly as she learned from her mother. With a timid but proud smile she asks herself “why so many people come to my house to have coffee when the only thing I do is make it as I was taught.”

Some of the mountain people say the best coffee is the one roasted without sugar and then pulverized in the mortar. Others, on the other hand, are of the opinion that the method doesn’t matter as much as the quality of the bean.

“Coffee is coffee no matter how. It doesn’t matter if you grind it in the machine or using the pestle and mortar, if it is roasted with sugar or without it,” says Conrado Tasset, a famer who lives “almost at the top of the Maestra.” For him, “life is not the same without coffee, for me that morning sip is the main moment of the day.”

Conrado, who is close to 80 years old, has been growing coffee all his life. That’s why he remembers with nostalgia that time “in which more than a million cans were brought down from the hills of Buey Arriba, in the 1960s.”

To again have those results, he recognizes, there’s still a long way to go. The excess of volunteer work and the bad agrarian policies which held sway for years in coffee growing led hundreds of families to emigrate from the Sierra Maestra. And although with the increase in prices the panorama today is more promising, many producers are waiting for other decisions that will boost even more this rebirth. For example that they be able to freely sell and even export their harvest without the State being the only mediator.

Meanwhile, the people of San Pablo de Yao, from the entire Sierra, continue clinging to their coffee; to its growing and processing; to drinking it in a mug or a steaming hot cup; alone or with cheese, milk or chocolate. At daybreak, after lunch or when the sun begins to set. But what’s most important: pure, very pure, like the sense of their tradition.

[1] The popular name given to the coffee sold by the State to Cuban families at subsidized prices as part of the monthly rationed basic food basket.

The Cuban Art of Capturing the Yes I Do

Millennials in Miami and Havana are "Together"