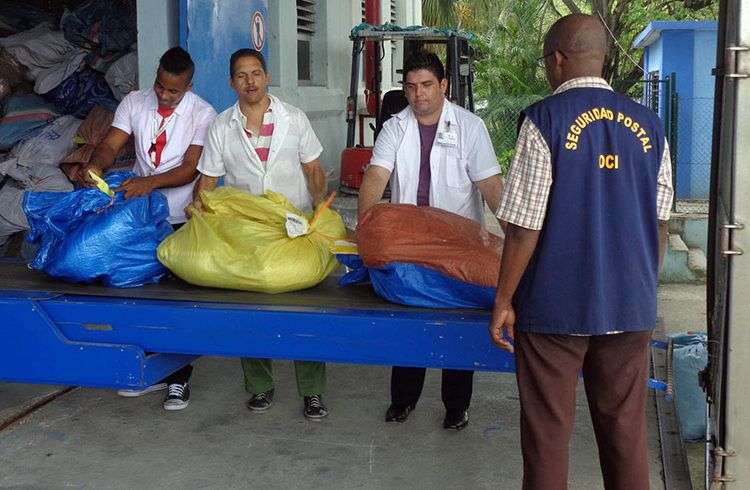 Doctor Androvis García Pupo is an expert in preparing packages to dispatch to Cuba. He buys a box and fills it with shoes and grooming products. It never weighs over three kilograms, so that his parents, his wife, nor his children have to pay a penny for receiving them. His room in Ribeirão das Neves, which he shares with colleagues taking part in the program Mas Medicos en Brasil (More doctors in Brazil), is full of small bulks everywhere. However, assuring these deliveries get to Cuba has latelybecome an odyssey.

Ribeirão das Neves is located in the State of Minas Gerais, which is not so different from his home province in Cuba, Las Tunas. Its inhabitants are people from the countryside or craftsmen mostly making a living in the nearby municipalities. For that reason, during the day it is called “dorm city”. Yet, as well as in his home province in the eastern part of the Cuba, there is a hospital, a cemetery, a church, and a post office. Androvis pays the post office a monthly visit to dispatch his packages to Cuba.

This doctor is also one of the readers of OnCuba who commented the statements by the Cuban Post Office Enterprise (Grupo Empresarial de Correos de Cuba) during a press conference on the irregularities in postal deliveries, published last June 13. He, as well as other 12 000 colleagues serving in a health mission in Brazil, now have more questions than answers.

Comments by internationalist doctors were also placed in websites of journals such as Granma, Juventud Rebelde and Cubadebate. These doctors demanded clarifications regarding some answers by the Cuban Post Office Enterprise. In our website, that was the most commented article last month. For instance, user Miguel Ángel Lima Espinosa, also working in Brazil,pointed out: “… we demand the particular situation of each delivery be reviewed, at least for Cuban doctors in Brazil as part of an internationalist mission which we are carrying out with discipline, we are offended by the lousy work and the management developed with our deliveries”.

Katherine, another of our readers, also expressed her viewpoint in this regard in our web: “It is sad to see our suffering when we send a package to Cuba. It is like playing Russian roulette, you don’t know if you will win or lose. The truth is we have become really good at justifying the wrong…”.

In this context, the Cuban post office decided to offer a second press conference last June 27. This time it was published in Granma’s website and was addressed to all users online from 9 a.m. till noon (1).

One of the first issues tackled by the executives of the Cuban company was the differences between ordinary and certified post services: “Ordinary service is more economic than the rest of post office correspondence services. These deliveries are not registered in any computerized or manual follow-up and location system. These are controlled by the general amount of ordinary service received, attended and delivered in kilograms. Customers can surrender claims on ordinary services, but worldwide this kind of service doesn’t offer indemnification for non-execution of the service, losses, or non-reception of deliveries by addressees.

“Certified service means that the delivery is registered and monitored in a computerized or manual follow-up and location system, so it is possible to know in what stage it is. Its charge is higher than ordinary service, precisely due to its registration and monitoring (…).”

According to this, doctors in Brazil and other nations first must verify what kind of service (ordinary or certified) the country of origin offers and if they have right to be indemnified en cases of losses or pillaging.

Via email, Androvis explained that the only means authorized so far in Brazil is “economic delivery”, which costs 84 real plus one real for insurance. After filling in the documents with the data of the sender, the post office seals the packages, hands in a receipt and the code of the package. With that code clients can track the delivery via www.correiosdobrasil.com.br with exact times and dates.

The Cuban doctor also assured that “the movement of these deliveries from the municipal post office to the Customs Office only takes between one and three days, sometimes less. Once there, they remain from 5-10 days till they are dispatched to Cuba, sometimes earlier. That’s when the odyssey begins given that there are no means to monitor deliveries. I have sent packages to Cuba that has taken up to four months to be delivered to my family. Others aren’t even there yet”.

As to such delays in the delivery of packages from Brazil, the Cuban Post Office Enterprise stressed during the online conference that “International Postal Packages sent from Brazil are delayed because they are not sent in through direct flights between Brazil and Cuba. Brazil’s post office uses Colombia and Panama, among other nations, as intermediaries”.

“In this field there is a saying that goes: Stuck mail is stolen mail. We have documented and informed Brazil’s post office about dispatches that have taken up to 45 days. That’s the reason why,sometimes a deliverydispatched in May from Brazil arrives earlier than another one dispatched in April. Deliveries are not necessarily stored chronologically, so the first one to leave is not always the first one to arrive.

“If we add delays (up to two months) in their processing as a result of technological issues in our international exchange office, there is obviously inefficient service in both, the Brazilian and the Cuban postal service. Postal traffic between Brazil and Cuba has reached record figures, flow of mail we were not expecting hence we have taken the necessary steps and actions to minimize the negative impact already caused.”

Many of our readers wonder why there isn’t yet a fast and effective solution between both postal services. Representatives from Cubana de Aviación, as requested by the Cuban Postal Service, got in touch with Brazil’s Post Office Service and offered them direct flights in order to avoid such delays; but there isn’t ananswer yet. “During the last contact, two days ago, we were informed we must wait for the FIFA World Cup to end to retake that issue”, explained the Cuban enterprise.

Moreover, the recent increase in the prices of packages in Brazil “is a decision made by the Brazilian Post Office in view of the growth of the traffic between Brazil and Cuba we weren’t aware of. We have addressed them for assessing a bilateral agreement for improving the quality of this service”, it noted.

Nevertheless, for Androvis García, the greatest trouble arises once they are notified their deliveries are in Cuba already: “That’s when the uncertainty begins. I wonder if they will get the full package, considering that when I visit the island on vacations I can only take 25 kilograms as luggage. What’s 25 kg for a large family with so many needs? I feel the loss of the things I gathered with so much effort and sacrifice to send to my family”.

As to the other steps taken in Cuba against crimes related to International Postal Packages, the Cuban enterprise said that “nothing can justify a stolen or pillaged package. As soon as we detect a crime committed by our staff we take proper actions and straighten things up. It is our duty and our responsibility to regain customer’s trust in our services (…)”

Some of the actions undertaken were: the creation of a postal security team at the airport, for verifying and certifying the conditions and integrityof postal deliveries; the installation of a closed camera circuit at the International Exchange Office and constant visual monitoring through that system to high risk processes; the use of metal detectors in points of access to the international handling floor. Besides, all staff was banned from wearing earrings, watches, cell phones, etc. in this floor; all devices broken down are repaired in order to preserve their integrity; and the security staff must maintain constant control over transportation vehicles loading and downloading at the said office.

“When a felony by one of the staff members is detected the first thing we do is to file the corresponding report to the police for beginning processes related to administrative and/or penal responsibility. Anyway, the new staff is subject to strict recruitment and selection processes”, stated the Cuban Post Office Enterprise.

According to its executives, the nations that sentthe most packages to Cuba via email this year were Brazil, Spain, Germany and Jamaica. A total of 127 packages were reported missing, 72 pillaged and 21 altered, for an amount of 220 deliveries with trouble. The amount of deliveries handled by the Cuban enterprise was over 625 000 by the end of May.

The main issues this year have to do with delays of deliveries, which is expected to improve by the end of July. Right now, they rely on three X Raysmachines and working hours at the International Exchange Office have been expanded to 24 hours with the staff that volunteered to work extra hours. The Cuban enterprise also stated that “the transportation of deliveries to post offices all over the national territory is now carried out by train to provinces such as Camagüey, Holguín, Santiago de Cuba and Villa Clara, which work as transit points to adjoining territories. We are also making arrangements with Aeronáutica Civil de Cuba for using this means of transportation for other national destinations”.

Androvis, from Ribeirão das Neves, in Minas Gerais, trusts that his packages will arrive any moment at their final destination. Though he confesses: “How can I relax knowing that the fruit of my work might not get to my family? Every day I have to deal with the fact that I’m in a foreign country, away from my family, loosing special and important moments in the lives of my children, but I keep on with my duty and I try to help as much as I can. Think about that and you will realize how we feel, and by ‘we’ I don’t only refer to my family and I but also most my colleagues in Brazil and other places of the world,who are going through the same situation with their deliveries. I hope these issues can be solved because we still trust in a company with so many years of experience”.