by Eric Caraballoso
in Cuban Economy
0 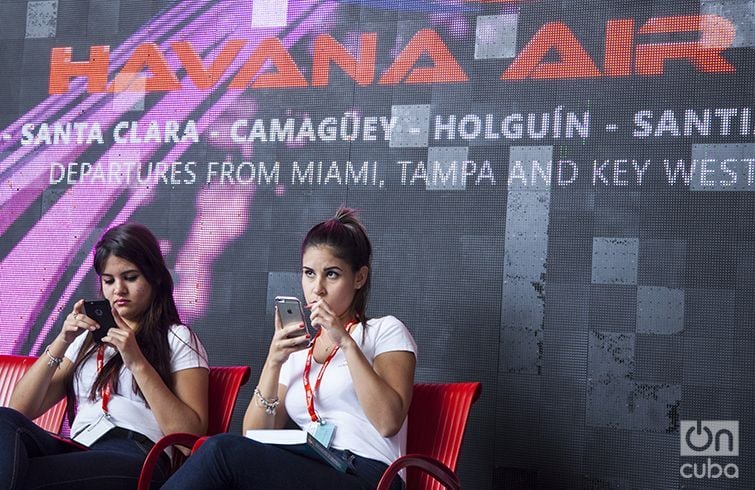 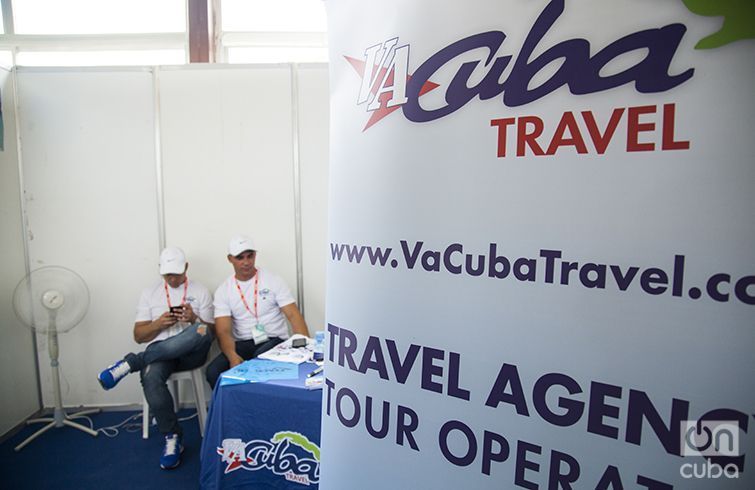 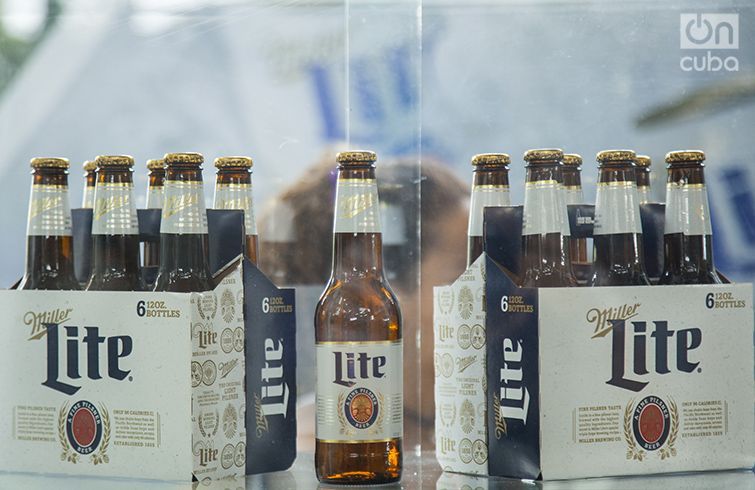 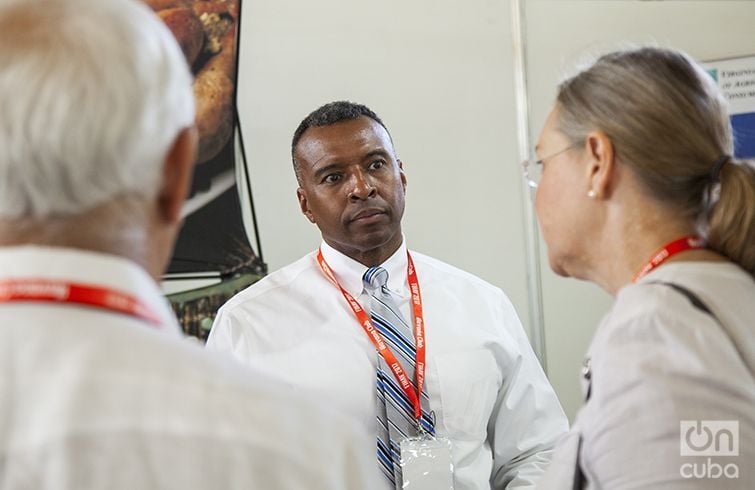 Representation of the state of Virginia in FIHAV 2017. In the center, Basil I. Gooden, secretary of agriculture and forestry. Photo: Claudio Peláez Sordo. 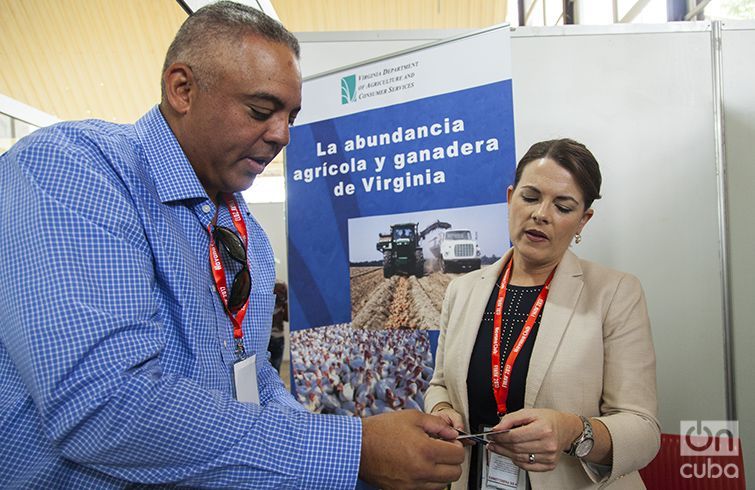 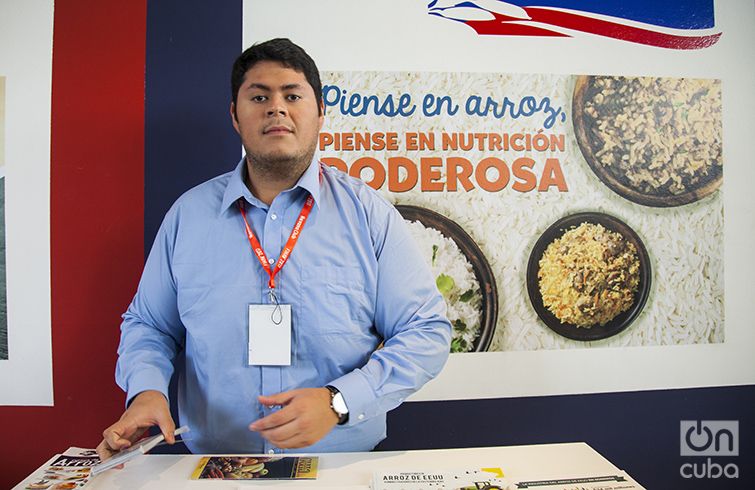 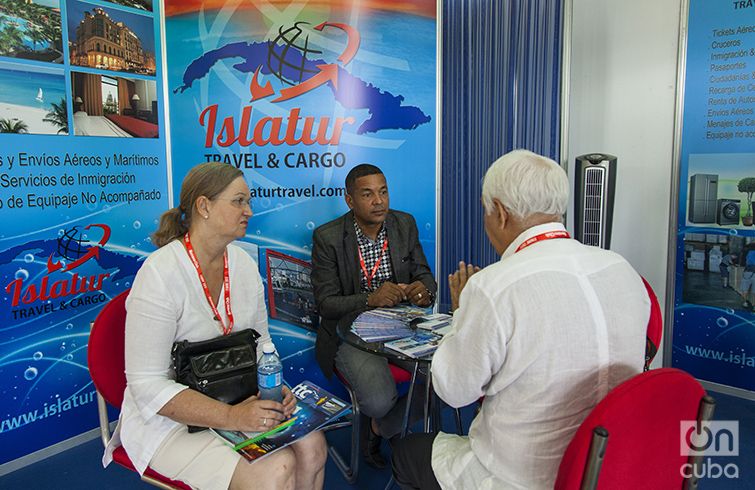 The 35th Havana International Trade Fair (FIHAV 2017) maintains the extensive convocation of previous editions, with more than 3,000 exhibitors from some 70 countries. But not all is growth in the ExpoCuba fairgrounds.

In pavilion 7, where around 40 U.S. companies promoted their products and services in 2016 – the largest U.S. participation in the history of FIHAV, which doubled the biggest registry until then – now there are only a dozen. Even some that had previewed their presence in Havana, in the end, did not take up stands.

The “cooling” of relations between the two countries caused by the Trump administration has left its imprint on the island’s principal trade marketplace. However, there are those who persevered with Cuba.

Like last year, the Secretariat of Agriculture of the state of Virginia is present in the fair. Its topmost authority, Secretary Basil I. Gooden, thinks that the rollback in bilateral relations is “a temporary situation” and not wanted by many U.S. politicians and businesspeople.

Gooden told OnCuba that in Virginia there is still “great interest in the Cuban market” independently of the Trump government’s position, and underlined that Governor Terry McAuliffe himself is backing that wish of his state’s businesspeople and farmers.

“That’s why we are present in the Fair,” he explains, “to demonstrate that Virginia has a real commitment with Cuba.”

For the politician, the ties between the island and his state can go beyond agriculture: “Technology, culture, science…can be shared. There are many areas in which relations could be strengthened if the laws and the conditions allow it. There can be many benefits for both sides.”

According to Gooden, the authorities and citizens of many of his country’s states share Virginia’s view about Cuba; they back trade with the island and want to continue forward in bilateral relations, “Even when the Federal Government does not facilitate it.” Thus the main question “is to not stop and continue promoting business between the two countries.”

“I’m optimistic,” he affirms. “I feel positive about the future of relations between Cuba and the United States, and especially with Virginia.”

When I asked Jay S. Brickman why his company came to FIHAV 2017 despite the current scenario of relations between Cuba and his country, the vice president of government services at Crowley Maritime Corporation answers convinced: “because we must.”

Brickman speaks on behalf of a company with 125 years of experience and a recognized international prestige. He has been in Cuba for 16 years, ever since in 2001 he signed a contract with the Cuban authorities to transport chicken and brought over the first cargo boat from the United States in decades.

Since then business has still not grown as expected, but Crowley has remained faithful to its business philosophy.

“We are in Cuba because of our company’s commitment with this country,” affirms Brickman to OnCuba. “Respecting the agreements assumed forms part of our philosophy, even if there have been some difficulties and in financial terms business deals have not been the most important for the company. But they normally are and we seek the way that they are also the same in economic terms.”

In the context of the Fair, the U.S. firm has been negotiating a new contract with the Cuban state-run Alimport import company to transport food products to the island, and its vice president expects the negotiation will bear good news for both sides.

Based on his experience, Brickman says that the keys to achieve success in commercial relations with Cuba are: patience, passion and perseverance. This is precisely the title of one of the chapters of the book Cuba Imports, which he wrote with María Conchita Méndez, director of sales and commercial development for Latin America of the Alabama Port authority – also present in FIHAV 2017. In his opinion the current moment is opportune to apply his formula.

“It’s not time to withdraw, but rather to remain and demonstrate interest if it really exists,” is his advice.

The businessman, with a vast work experience in Latin America, regrets that his country’s government has “put a brake” on the rapprochement initiated under the presidency of Barack Obama and that it not perceive the importance of relations with Cuba in the region.

“For the United States better relations with Cuba supposes better relations with Latin America. That has been very clear in recent years, and the Obama administration understood it. Obama also recognized that the policy of isolation against the island did not work and had a great initiative with the rapprochement between the two countries, but Trump doesn’t have that vision.”

“However,” he specifies, “the Trump administration has also questioned other international agreements and trade treaties and seems to lack an almost complete understanding about the importance of having allies in the world. That’s why Cuba should not feel paranoid with this. Offended yes, but paranoid no, because the current government’s position is sadly the same with the entire world and is not shared by many Americans.”

“There is simply no logic to this,” adds Brickman, “and for this vision to not prevail we all have to work in Cuba as well as in the United States. That’s why we will be in Cuba as long as we are welcome. We came to stay and to be here when more businesses can be built.”

Apacargoexpress has been providing for more than seven years commercial and non-commercial cargo service from the United States to Cuba. Its general manager, Cuban Eduardo Aparicio, speaks with pride about his company’s leading position in this field, thanks to the permits granted by the Department of Commerce to be able to operate with the island.

However, Aparicio doesn’t aim to block the sun with a finger. Beyond what has been achieved by his company, he recognizes that relations between the two countries are going through a “dark period” in which it is necessary to bet on work and a change of mentality.

He came to FIHAV 2017 with that conviction.

“We decided to be in Havana despite the fact that there were U.S. companies which canceled the spaces they had booked,” he told OnCuba. “But to do honor to the Fair, to our interest in remaining in Cuba, we assumed those spaces, paid for them and we are here, thus we feel the Fair as if it were our own.”

Aparicio recognizes the Trump government’s position toward the island as a serious obstacle for bilateral relations and considers it is “very difficult to discern what is going to happen in the short term.”

“The president is a very volatile person,” he affirms, “and it is impossible to predict the future with this administration. It is painful because Obama did an exceptional job and fought against a great deal of opposition so that the people would understand the importance of developing relations with Cuba. And it is also hard for me because I’ve been 18 years in the United States, I feel well in that country, but I’m also Cuban and the things that are not good for Cuba hurt me.”

However, the general manager of Apacargoexpress not only points to the policies of the current U.S. government.

“In Cuba there are also things that have to improve,” he comments. “A greater opening to the world, to the Cuban Americans, most of whom want the best for this country, is necessary. It is not coherent to continue with the taboo about whether we are Cubans or Americans because we are actually one thing: Cubans.”

In his opinion, the Cuban Americans who back the rapprochement with the island “are already a majority.” However, he affirms, “we cannot put our trust on this. We need to be more consistent and to have more backing by Cuba.

“It is true that every year there are meetings like the one that was just held in Washington,” he says, “but after these meeting there must be a follow up, a continuity. It is necessary to continue ‘warming up” what is being done in this direction so that it is really effective.”

Despite the difficulties, Aparicio believes that “better things are going to be attained” in bilateral relations. “I plan on being in Cuba and in the Fair while life and U.S. legislation allows me,” he concludes, “because our work is respectful of the law. And if there comes a time when I do not have the permits to do what we are doing now in our company, then I will fight for a legal means to continue: I will speak with my congressperson; I will discuss the issue and will try everything that can be done together with those who back this vision. We mustn’t accept that relations continue to be cooled.”