Although he was born in Benin, Western Africa, creator Emmanuel Servais Agboton likes to be called Cuban. He arrived in 1982 to study electric engineering thanks to a Cuban government scholarship. Here he discovered the work that is his passion: making floor tiles.

More than two decades ago, this entrepreneur turned artist created Arte Próceres, a family business that was born of his curiosity about “that invaluable wealth I saw at my feet, deteriorated in multiple mansions in Havana.”

Almost all the workers of Arte Próceres are members of the Cuban Association of Artisan Artists (ACAA). In 2013 they won the Award of the Havana International Crafts Fair (FIART). Places like the Ambos Mundos Hotel, the National Council of Visual Arts, the Formas Gallery, the Casa de Patrimonio, the homes of dancer Carlos Acosta and of singer Cucú Diamantes, exhibit his beautiful floor tiles, lasting and of optimum quality.

At present he is restoring the floors of the famous Hotel Nacional de Cuba. “Perfection does not exist, but we much get as close as possible to it. The better things come out for us the more effort we must make, those who really work are never satisfied,” says Emmanuel to OnCuba while holding one of his molds for hydraulic floor tiles (almost 400, a figure that turns him into the creator with the greatest number of designs on a world level).

“When I finished the career I returned to my country, but the political instability made me reconsider returning to Cuba and staying. When one is young the spirit of adventure and dissatisfaction make you experiment. I had fallen in love with the floor tiles and started asking around about them. At 23 I saw for the first time a floor tile and it captivated me, since in my native country they don’t exist, most of the floors are made of cement. I had never seen a tile factory, and when I saw one the impact was such that I decided to devote myself to that. Everything started in 1995, when I decided to make the tiles for my home. I started making the machinery; success doesn’t lie in making the tile but rather in manufacturing the machine. A motor here, a screw over there, I have one that is a complete hybrid from several countries, scrap iron, materials in disuse and the goodwill of the people who have collaborated have been essential, they are unique machines made thanks to constant experimenting. The frame, the plaque…we make everything, everything is made in Cuba and we give a guarantee of 100 years. The raw material, with which we have created more than 200,000 pieces, comes from the thruway’s concrete wastes. With Cuban mills, or stone grinders created by ourselves, we give the shape we need.” 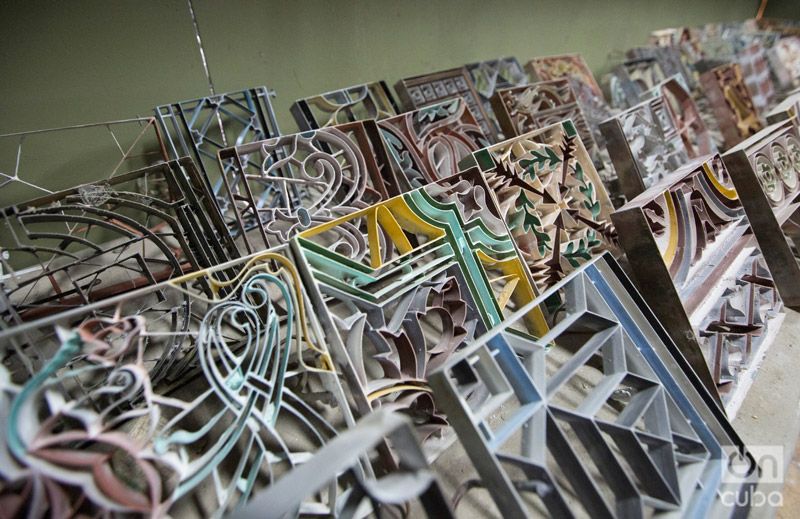 What is the special characteristic of your floor tiles?

We create the hydraulic tiles one by one through an artisan manufacturing method conceived according to the best tradition. Our production is based on the use of national materials, and with this we offer an incomparable quality of the floor tile in relation to our competitors. We are currently manufacturing more than 300 different models with multiple shapes and designs, from the most classical designs to the most modern and daring. The designs are colorful, we have original colors and we reinterpret others according to the client’s taste, at times they help us to think, and we create others thanks to our imagination. It is an old technique and we make an effort for the essence to not be lost. This is the only floor tile in the world that with time gains in value, an old tiled floor does not fade or deteriorate; acid is its common enemy.

What has working with floor tiles taught you?

It has brought me many happy moments and headaches, at times it doesn’t let me sleep and, above all, it has given me these grey hairs. I almost gave up two or three times, because I didn’t have the backing, but I continued forward. The hurdles, which have been many, have given me the strength to continue. The first tiles I made were spoiled, they had too much carbonate of calcium. By experimenting and, after much effort, I came up with the exact formula. I can’t obviate the connoisseurs who helped me so much. Rigoberto Hernández is still alive and almost at 90 still makes molds. In Cuba knowledge is given away: we must have ways of accepting it. In my country people charge for this, I teach young people and, however, I pay them. I’m African and I learned with a great deal of humility. I started transforming what I had learned and incorporated it, that’s why I don’t forget it and I live grateful to those who taught me.

Why did you decide to call your group Arte Próceres?

As you know, the national heroes (próceres in Spanish) are the ones who started and waged the independence struggles. We can’t speak of the Cuban house without speaking of its floor tiles. In order to lower costs, in the 1960s they disappeared. Times have changed and now we must retake the aesthetics in our constructions. Our task is to give the floor tile its value within the identity of the Cuban colonial house, rescue its history and essence.

What aspirations do you have?

An immense thirst for work; I want to flood the country with floor tiles. We are now immersed in a project of decorative paving stones. We already have 21 models inspired on the old ones and I know they will be greatly liked. They are ideal for parking lots and around swimming pools. In the beginning Cuban floor tiles reproduced European designs and, little by little, they started acquiring their own stamp, and that is something we must rescue. We should have more factories so that everybody has floor tiles in their homes. Like cigars and rum, the floor tile is another of our key products. My greatest aspiration is to give the Cuban floor tile the place it deserves.