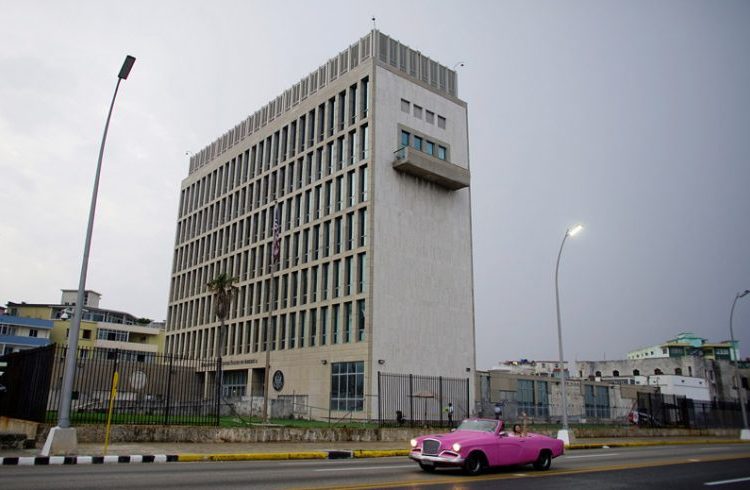 A car for rent for tourists passes by the U.S. embassy in Havana. Photo: Alexandre Meneghini / Reuters.

The U.S. government measures, which restrict trips to Cuba and doing business with enterprises linked to the Cuban Armed Forces and Intelligence Services, have taken effect. Cuban and U.S. analysts are of the opinion that their further effects (since they have already considerably affected the quality of bilateral relations) will damage the Cuban economy, in the state-run sector as well as the non-state: the private sector which the Trump administration says it protects is already suffering with this decision.

The sanctions suppose the prohibition of doing business with enterprises like the GAESA conglomerate, which owns Gaviota – the principal Cuban tourist group with 83 hotels and five marinas –, or CIMEX, which owns the largest network of retail shops and controls around 10 percent of Cuba’s commercial exchange.

GAESA also has a small participation in ETECSA, the state monopoly of telecommunications, although that firm does not appear on the “black list” of Cuban enterprises released by the U.S. government. Moreover, its influence extends to the Mariel Special Development Zone, Cuba’s star project to attract foreign capital and which has been included in the prohibition.

Dr. Juan Triana, from the Center for Studies on the Cuban Economy, is of the opinion that despite the restrictions, the GAESA businesses will not suffer too much since their exchanges with U.S. companies are “almost insignificant.”

Triana explained to the EFE news agency that the conglomerate has “an important weight, especially in tourism,” but does not control hotel chains like Cubanacán and Gran Caribe, which will be able to accommodate Americans.

Moreover, “70 percent of the Cuban economy is based on sectors outside its control, like the production of sugar, nickel, rum or tobacco, biotechnology or the oil installations.”

Entrepreneurs, the most affected

For Triana, the biggest impact of the administration’s new sanctions will be suffered by the Cuban people, particularly the more than half million entrepreneurs of the incipient private sector, which indirectly employs some 25 percent of the workforce.

According to the economist, the U.S. position is “absolutely hypocritical, foolish and naïve” when it affirms that its objective is “to encourage the (Cuban) government to move toward greater political and economic freedom for the Cuban people.”

“If it affects Americans’ trips, those who will suffer are the private workers who have restaurants or house rentals and fundamentally live off of tourism,” Triana explained.

Although it maintains the 12 categories that allow Americans to travel to Cuba – free tourism is still banned -, the Trump administration has eliminated individual trips in the “people-to-people” category, which were the most numerous since they were the cheapest and required less paperwork.

Now they will only be able to visit Cuba on group trips organized by agencies under the requisites imposed by their country’s government.

In spite of Trump, the United States is currently the second market issuer of visitors to Cuba: last year some 285,000 visitors arrived in the country and this year they will be around 400,000, according to U.S. travel agencies.

Collin Laverty, president of Cuba Educational Travel, an agency that organizes legal trips to the island, told EFE that, despite Washington’s rhetoric, they have not noticed a decline in the demand and added that many Americans are still interested in getting to know the rich culture and history of Cuba and they can still travel under other categories.

Laverty agrees with Triana in that the biggest impact will fall on the private sector, which extensively benefitted with the increase of individual trips from the United States. Many Americans stay in AirBnB houses, eat in paladares and hire private taxis or guides, he added.

In all of Cuba there are some 21,000 private rental houses and more than 2,000 private restaurants – known as “paladares,” businesses which have spread like wildfire with the tourism boom of the last three years, to a great extent motivated by the thaw with the United States.

Laverty affirmed that now they will be harshly hit by those damaging and counterproductive measures, and he also referred to the “hypocrisy” of the Trump administration which is retaking the Cold War policies with Cuba while it does business with other communist countries like China and Vietnam.

Reactions in Cuba and the U.S.

After the announcement of the U.S. sanctions, the Cuban government considered the measures a “serious roll back in bilateral relations.”

The director for the United States of the Ministry of Foreign Affairs, Josefina Vidal, stated to the press that the new regulations are not only going to damage the Cuban economy, but also the Cuban people and U.S. businesspeople and citizens, who will see their right to travel and to do business in Cuba “even more restricted.”

Vidal considered the list of prohibited Cuban enterprises as “arbitrary,” with entities “allegedly linked in an unfounded way” to the defense and security sectors on the island. She also pointed out that some regulations that modify the travel categories denote “a clear political intention.”

In the United States, the National Foreign Trade Council (NFTC) estimated the new restrictions were “wrong” and “counterproductive”.

NFTC Vice President Jake Colvin said in a press release that preventing his country’s companies from participating in the Mariel Special Development Zone prevents Americans from taking part in a potentially profitable economic activity for Cuban workers and people.

Moreover, he noted that the restrictions in the “people-to-people” trips will limit Americans’ contact with Cubans and will affect the private sector workers who provide accommodations and other services.

That opinion is shared by Ben Rhodes, advisor to President Barack Obama and one of the key figures in the rapprochement between Cuba and the United States, who on his Twitter account criticized the coming into force of the measures.

For Rhodes, Trump’s actions under the influence of Senator Marco Rubio will affect the Cuban private sector, which the Donald Trump administration claims it supports.

Meanwhile, Senator Patrick Leahy (D), a strong promoter of bilateral rapprochement, commented in a communiqué that these measures are just “a reminiscence of the Cold War” and stated that these restrictions would be expected from a paranoiac totalitarian government, not from a democracy like theirs.

Other U.S. politicians and businesspeople have also demonstrated their disagreement with the sanctions and have pointed to their unfair and antiquated character, among them congresspeople Barbara Lee, Dianne Feinstein and Mark Sanford.