The “authorities in charge” of implementing the test “are ready to put into effect these regulations,” according to the Cuban News Agency (ACN).

byOnCuba Staff
in Entrepreneurship in Cuba
0 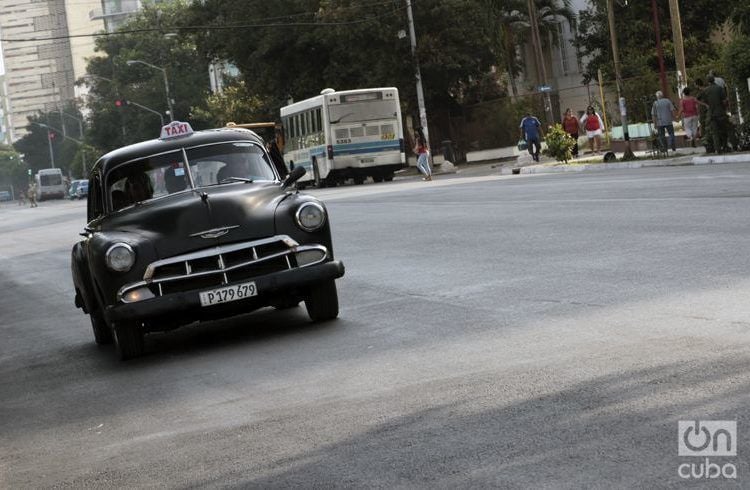 Havana’s private taxi drivers are already in countdown. The transportation experiment announced in July as part of the new measures for self-employment in Cuba will start this Monday October 8, according to the Cuban News Agency (ACN).

The agency affirms that the “authorities in charge” of implementing the test “are ready for putting into effect these regulations.”

The process of “preparation of the administrative structures responsible for issuing the operation permits for private transportation workers” has already concluded, according to Cuban Deputy Minister of Transportation Marta Oramas, cited by the CAN based on her appearance  last Tuesday in the Mesa Redonda TV program.

According to Oramas, 327 seminars were carried out with an assistance of 67 percent of those convened, “who amount to more than 6,000, among those who have permits for this service on jeep, cars, vans or minibuses, seating six to 14 passengers.”

The private transportation workers were officially convened since September 25 in an “orderly and personalized” way to participate in the experiment. For this, they are given a “pro form contract” that will allow them to buy fuel, “whose possession, in addition to being the title holder of a bank account, is a mandatory requirement to obtain a license to operate,” the ACN specified.

The deputy minister affirmed that the adopted measures “seek a balance” between the interests of the population – which demands “more affordable prices and safety” -, the transportation workers – “so their incomes don’t drop and they have access to facilities with supplies” -, and the State – “which must guarantee a stable, organized and quality service.”

The experiment established a new classification of private taxis in the modalities of route, free and high comfort or classic, “which is the first step for the establishment of a national regulation for this service.”

In addition, the regulations comprise a sign for the means of transportation that specifies the service they provide, as well as a magnetic card to purchase the fuel at “differentiated prices” and a contractual relation with a state-run enterprise “for the management of the transport and access to the network of workshops, supplies and auxiliary services,” in the latter cases for the modality of route taxis.

This service, “with the greatest demand,” was organized in 23 routes at a pre-established price of five pesos per every 8 kilometers, while each route will have a minimum of two kilometers. Those using them will not be able to make trips on another route that has not been agreed upon and will receive discounts when paying their taxes.

In her TV appearance, Oramas explained that since May 2017 a service of route taxis was implemented, managed by a state-run enterprise, which covered 19 routes and whose results “have made it possible to validate the established itineraries and routes, which take into account the natural knot of the population’s movement.”

Around 90 percent of the private transportation workers registered in Havana provide passenger service, which in the opinion of the transportation authorities “complements and is an important alternative to the service provided by state-run enterprises.”

After four months of the experiment in the Cuban capital, its extension is previewed to the provinces of Artemisa and Mayabeque and in a year to the rest of the island. In addition, the intention is to also incorporate “larger size and capacity vehicles.”