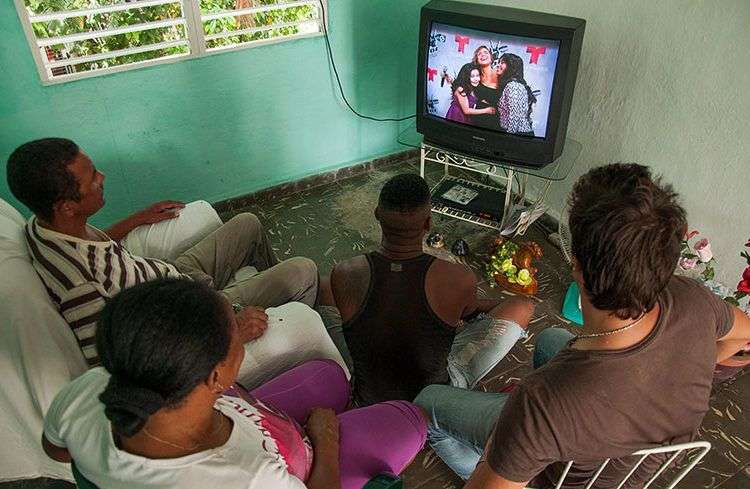 The Weekly Package emerged in 2008 as an idea of a visionary, YoePC, who laid the foundation for a business that now provides income to thousands of Cubans, worth tens of millions of dollars a year and has become a social-cultural phenomenon, penetrating hundreds of thousands of homes.

The compendium of movies, series, reality shows, magazines, soap operas, music videos and websites is downloaded in state entities with good access to the network, such as the University of Informatics Sciences (UCI) or in those with satellite dishes as well as from Cuban television.

Cuban musicals come out of local music producers who provide for artists who cannot find a broadcast on state media. The “Yonky” for example, is a musician who very few people knew until he began to appear on the package.

Dozens of advertisers sell their services to the self-employed. Advertising is well positioned within the package, along with related subjects, such as hairdressers ads inserted in the “American Beauty” show

Editing of the package is public and resellers include their phone numbers in advertisements.

Section From the Web allows to read the covers of some informative pages. In contrast, buy-sell sites, as Revolico, are downloaded completely, allowing the user to browse offline, accessing all the information from those sites, something requested by people.

Material suppliers can earn up to 20 CUC per week. Depends on how much they delivered to “David” and “Alberto” YoePC heirs, who disappeared late last year. Our information is from a source working on the package and agreed to speak under the commitment not to mention the real names of the participants.

“David” and “Alberto” made ​​the first edition, consisting of a terabyte of materials, and delivered weekly to 300 resellers in the capital and the provinces, where it arrives quickly thanks to the aid of interprovincial bus drivers who make an extra income that way.

Usually the 300 made ​​a new version according to the tastes of their clientele, expressed through emails. “We include everything that people ask except for political issues so that we do not get into trouble,” said one of the editors of the package to OnCuba.

The pyramid base continues to grow as each reseller delivers the new edition to tens of zonal distributors, who in turn have networks of “walkers” walking neighborhoods and towns with a hard drive under their arm, carrying home the Weekly Package, for which they are paid between 1 and 3 CUC.

To this by hand distribution we must add even using WIFI clandestine networks in Cuba which include large numbers of computers; some come to connect several neighborhoods of Havana. And there are wire networks linking neighbors of one or more buildings, multiplying the audience of the package

The program brings a bit of everything, including enough of the “trash TV” reality shows or beauty pageants, predilection that worries the government. The cultural advisor to the President, Abel Prieto said that is the result of errors in the educational, cultural institutions and the media.

However, the former Minister of Culture made ​​it clear that the road does not go through to launch a campaign against the package, said it is a very complex phenomenon and reminded intellectuals that attacking it can backfire: “you know what happens when you forbid things. ”

The answer Prieto posed is to improve the quality of supply of the national media in order to recover the audience one day they held captive. There are rumors that even the feasibility of creating an official package at a lower price to compete with the current is studied.

Surely, when this all started 6 years ago, YoePC never imagined that video editing at home handmade organized would reach the social dimension and the cultural impact it has today, arousing controversy reaching the highest political level of the nation.

In all areas of the island there is a house that sells the package at differential price depending on the day / Photo: Andy Ruiz….