javier
in Foreign investment in Cuba
1 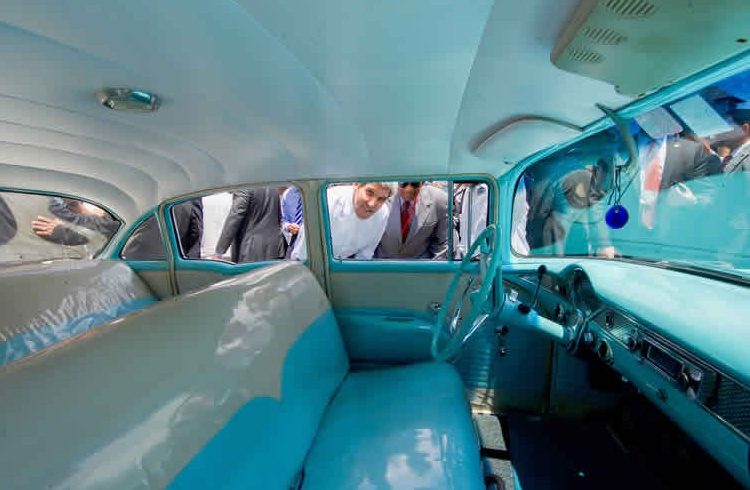 That former U.S. Secretary of Commerce Carlos Gutierrez supports the process of normalization of relations between the United States and Cuba is not news – he had already voiced his opinion in an article published in the New York Times, and in an interview with OnCuba.

Other heavy weights of the Cuban-American business sector and the political milieu in Washington have enthusiastically expressed their support to the reconciliation and the changes in the new economy of the island where they, or their parents, were born.

Comparing past and present positions toward Cuba is futile at this point.

When President Barack Obama shook the hand of Raul Castro, he opened a door to a new understanding of Cuba, both for Americans and Cuban émigrés, many of whom were still stuck in a Cold War mentality.

Carlos Gutierrez is an example of how, in only a few months, a person can go from total scepticism to wholeheartedly supporting the normalization of relations, without renouncing his believes, as he wrote in his NYT piece in June.

“After years of hostility and failed attempts at détente, I wondered: Did the Cuban government really want better ties with America, or was this simply another chess move in a tired game?” wrote Gutierrez in the said article, which concludes with his acknowledgment that the Cuban economy is changing.

This approach was very different from the pessimistic view he expressed in a previous interview with TIME magazine in December 2014, which was published one day after the announcement was made by the two countries on December 17th that they would begin talks to reach a rapprochement.

He predicted the U.S. “will have egg on our face” after the step taken by Omaba, and he said they should not believe “that somehow magically Cuba is changing.”

The best recommendation Gutierrez has now for those who oppose the relation with Cuba is that they come see the country with their own eyes. These are major words if we take into account that they are coming from a person who, for four years, headed up a commission tasked with bringing about a change of regime in Havana, on behalf of the George W. Bush administration.

Numerous delegations of congressmen and senators visited Cuba in 2015, as well as three governors (New York’s Andrew Cuomo, Hutchinson from Arkansas, and Abbott from Texas), looking to claim a piece of the Cuban market for their farmers and businesspeople.

Contrastingly, no Florida or Miami representative has travelled to Havana. The numerous Cuban-American representatives in Congress rapidly took sides against the normalization in the most different fashions: adding crippling items to the bill aimed at improving travel, or drafting a plan to reverse the agreement reached, which Marco Rubio included in his proposal of foreign policy.

“It’s curious how many of the people who oppose lifting the embargo have never been to Cuba… but they’re experts,” said Gutierrez ironically in a NTN24 show, Club de Prensa. He had made similar statements earlier in an interview for the George W. Bush Institute’s blog.

In both cases, he voiced his support to an effective rapprochement with the island, and said that the political future of the country should be decided internally. He also made a call to disregard the myth about how lifting of the embargo would not benefit the majority of the Cuban people.

In the summer, the White House welcomed a group of Cuban-American businesspeople, short before reopening the American embassy in Havana on August 14th, and enforcing a second group of measures in September, aimed at partially easing the restrictions and the sanctions against Cuba.

Those measures have been regarded as insufficient by Cubans and non-Cubans, including senators Jeff Flake (R-Ar) and Patrick Leahy (D-VT), two veterans in the struggle for reconciliation with Cuba.

In a letter to President Obama, both legislators proposed that the U.S. government adjusted the changes to the characteristics of the Cuban economic system and eliminated the rest of the financial restrictions – something that would be possible, if the president used his ample executive power to make changes to the embargo.

Commercial diplomacy was one of the pillars of the new policy towards Cuba in December 2014. A year later, the concept has disappeared from press releases, teleconferences, and speeches, even after a recent visit to Cuba by Commerce Secretary Penny Pritzker, whose agenda moved along the lines of the most recent messages from the Obama Administration.

A part of the Cuban-American business sector are jumping on the train of normalization and are asking the U.S government to go at full speed. But the good news about a total reconciliation with the forbidden island is only a reality for those who are not in the United States, and can sit and wait to see how one of the last walls of the Cold War falls down, brick after brick.