Their arrival has been added to the 43 locomotives out of a total of 75 manufactured by the Russian company Sinara, which should gradually reach the Island until 2021. 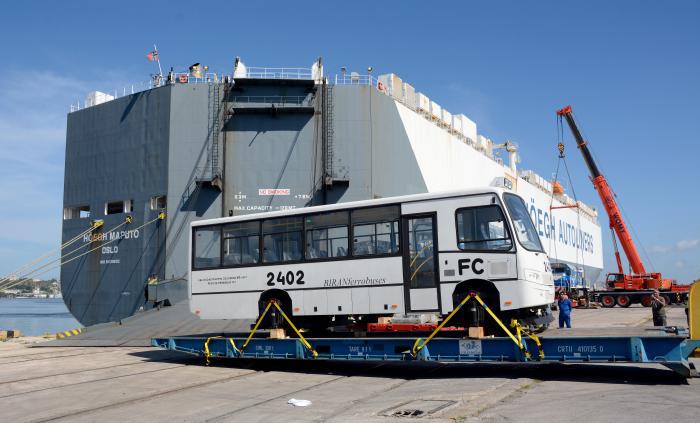 The diesel railcar that arrived in Cuba from Russia on January 3, 2019. Photo: Ricardo López Hevia / Granma.

A batch of seven locomotives and the first diesel railcar experimental prototype (ultralight train) arrived this Thursday at the port of Havana from Russia, as part of a contract with the Eurasian country to modernize Cuba’s railroad  sector.

Their arrival has been added to the 43 locomotives out of a total of 75 manufactured by the Russian company Sinara scheduled to arrive gradually to the island until 2021 with the aim of incorporating them to railroad freight transportation.

Each of the engines has an approximate cost of one million euros.

In the case of diesel railcars, they were designed by Russia with the technique developed by the Railways Union of Cuba (UFC), according to a report in the daily Granma.

UFC Deputy General Manager Rolando Navarro explained that the diesel railcar included in this lot will be tested during a period of 45 days, during which it will be subjected to different technical and transport tests and conditioning to the Cuban railways.

At the end of 2018, as part of the UFC program to boost the railroad sector, a lot arrived with 35 equipment for the transport of cement.

In December 2016, Cuba and Russia agreed on a roadmap to develop a railway infrastructure project to improve railroad capacity and revive the island’s depressed railroad system.

The agreement also includes technical assistance to Cuban specialists, the delivery of spare parts for the maintenance of the equipment and the modernization of a locomotive workshop based in the Cuban capital.

During Cuban President Miguel Díaz-Canel’s visit to Russia last November, his Russian counterpart, Vladimir Putin, offered the island “aid for the construction of transport infrastructure” and said that both had addressed the renovation of the Cuban railway network.

About 1,000 million euros (equivalent to about 1,054 million dollars) will be invested until 2030 in the execution of a modernization project for Cuba’s railways with the collaboration of Russia, according to Cuban media in 2017.

In recent years, with the signing of new economic cooperation agreements, Cuba and Russia have given a boost to their bilateral relations to reestablish the close cooperation they maintained before the disappearance of the Soviet Union (USSR) in 1991.