A delegation from the European Union is visiting the island to hold a political dialogue with Cuban authorities and to learn how non-governmental organizations and European businesspeople have been affected by U.S. sanctions. 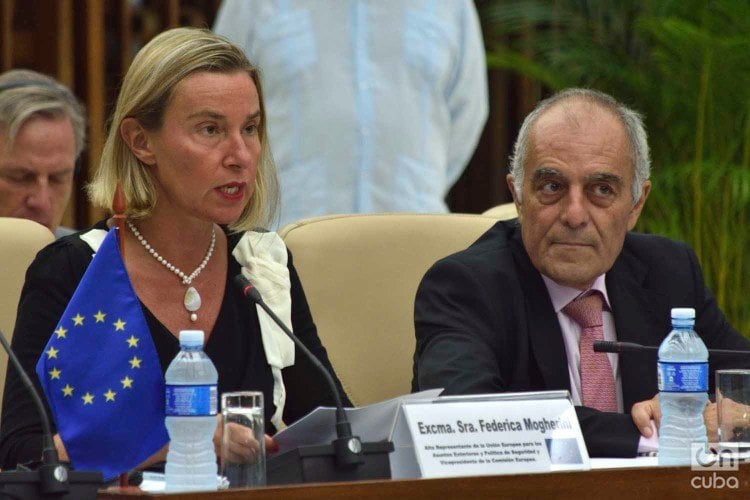 The head of European diplomacy, Federica Mogherini, together with the EU ambassador to Cuba, Alberto Navarro, during the 2nd Cuba-EU Joint Council, held in Havana on September 9, 2019. Photo: Otmaro Rodríguez.

The day before a meeting with Cuban authorities, European officials arrived on the island to take note of the way in which non-governmental organizations and businesspeople from European Union (EU) countries have been affected by U.S. sanctions.

Headed by Katja Afheldt, head of the Mexico, Central America and Caribbean Division of the European External Action Service, the delegation of almost half a dozen diplomats will be present Friday in a political dialogue with their Cuban counterparts.

But this Thursday they planned a meeting with the managers of nine non-governmental organizations and another with businesspeople based on the island so they could report on the difficulties they face due to the U.S. sanctions, said the EU ambassador to Cuba, Alberto Navarro.

“The European Union strongly condemns the economic, commercial and financial blockade of the United States. You have to call things by their name, it is a blockade that is trying to suffocate the Cuban economy,” Navarro said in a reception hosted for businesspeople this Wednesday night.

Navarro invited businesspeople to express their concerns about the U.S. sanctions, ranging from difficulties in transactions and opening bank accounts to the impossibility of importing material from abroad.

This year, the administration of President Donald Trump authorized the application of Title III of the Helms-Burton Act that allows lawsuits against companies from third countries that operate with goods nationalized by the revolution. The EU is committed to protecting its companies.

Hundreds of European companies, especially about 200 Spanish companies―such as tourism giants Iberostar, Meliá and NH―would be the focus of the lawsuits.

This Friday’s political dialogue is an exchange mechanism agreed between Cuba and the EU on issues of interest for both parties. Previously one was held on human rights.

Relations with the EU were relaunched this decade after in the previous one the bloc conditioned―through the so-called “common position”―cooperation and relations with Cuba to political changes on the island, without achieving the objective.