During the most acute months of the pandemic, the Prado stopped being the usual place. But little by little, it has been recovering its colors and its joy, its usual strollers and attendees. 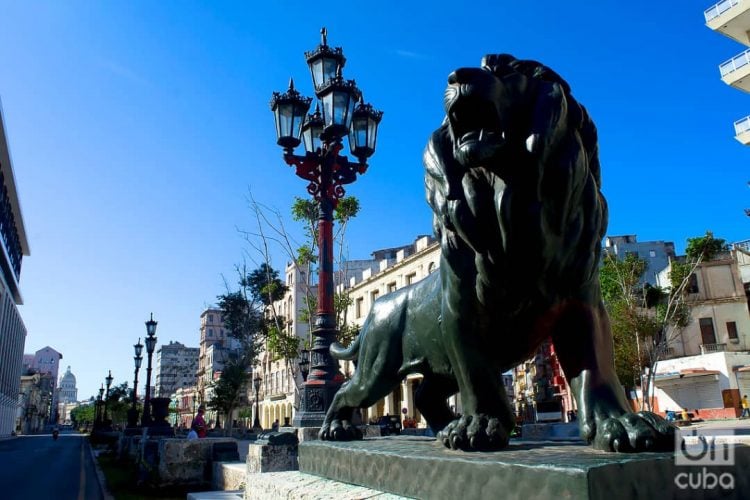 Through time it has been officially known as Alameda de Extramuros or Paseo de Isabel II or Paseo Martí, but for the people of Havana of yesterday and today—and surely also of the future—it has always been and will be the “Prado.” Just like that. A place that neither time, nor storms, real and metaphorical, nor the COVID-19 pandemic have been able to shatter its charm.

This extensive two-kilometer-long avenue, built at the end of the 18th century and transformed several times throughout its history, is one of the indisputable symbols of Havana and also one of its most emblematic places. A meeting and resting point, dating and commercial operations, strolling and children’s games, street activities and art exhibitions.

Although the wide, tree-lined Paseo, with its marble benches, lampposts, and iconic bronze lions—sculpted by Frenchman Jean Puiforcat and Cuban Juan Comas—is its most recognizable face, the Prado actually begins earlier, at the Fuente de la India and in front of the busy Parque de la Fraternidad, and extends to the famous Malecón in Havana, passing through the esplanade of the Capitol and Parque Central, with its monumental sculpture of José Martí.

Urban border between the municipalities of Centro Habana and Old Havana, its surroundings include unique buildings in the Cuban capital, such as the Capitol itself, the Grand Theater, recently baptized Alicia Alonso, and the Payret movie theater, which has come down in the world until it was forced to close for a lengthy restoration. There are also hotels such as the mythical Inglaterra, the Saratoga, the Telégrafo, the Parque Central, and the modern and luxurious Grand Packard y Paseo del Prado, the most recent jewel of Havana’s tourist infrastructure. In addition to others under construction.

In its surroundings there are also monuments, colonial fortifications such as La Punta, schools, everyday places, but with historical roots that are often forgotten, unnoticed, and other famous places such as the world famous corner of Prado and Neptuno, where “the deceiver” walked, that girl who dazzled men with her bulky but fictitious forms, who inspired Enrique Jorrín to write the first cha-cha (“La engañadora”) in history and launched the America Orchestra to stardom.

During the most acute months of the pandemic, the Prado stopped being the usual place. The tourists and the carefree strollers, the silent lovers and the children with their bustle and their games disappeared. A shadow of sadness and concern tinted its buildings and sculptures. But, with the revival of Havana, with the arrival of the “new normal” and the necessary coexistence with the SARS-CoV-2, the Prado—and its surroundings—has been recovering its colors and its joy, its usual strollers and attendees.

Life goes on again and the historic Paseo, the one built in 1772 under the colonial rule of the Marqués de la Torre, the one redesigned in 1928 by French landscaper Jean-Claude Nicolas Forestier, the one visited for two and a half centuries by countless locals and visitors, wakes up from its momentary lethargy and recovers its bustle, its vitality. Despite COVID.