The Isla de la Juventud is, in fact, a mirror of the big island. It concentrates and intensifies its features. 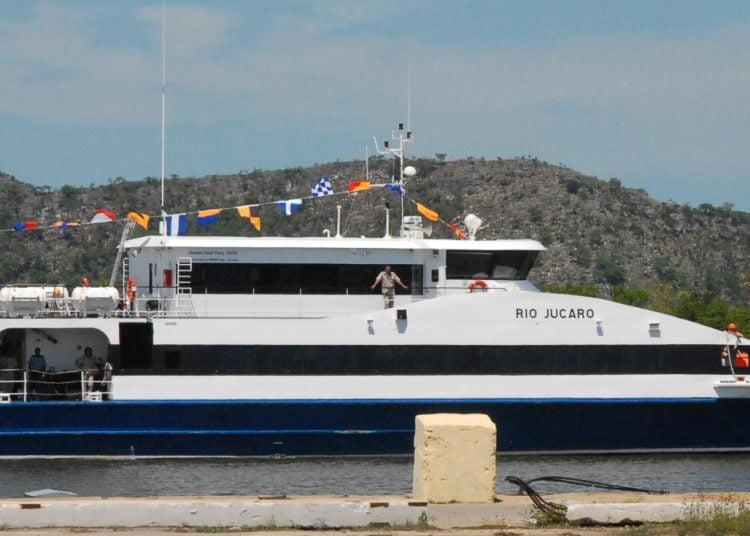 Río Júcaro Ferry, one of the catamarans that transport passengers between the ports of Nueva Gerona, Isla de la Juventud, and Batabanó. Photo: Victoria newspaper.

I came to the Isla de la Juventud for the first time on a plane, with my mother. We were picked up in an olive green “jeep” and taken to the Vanguardia de la Habana Secondary School in the Countryside. At that time, it was common for a junior high school in the countryside to have one hundred percent promotion.

We were going to see my father, who at the time was the deputy director of the Vanguardia de La Havana and who had not come to the capital for a while for work reasons. For me, it was fantastic to arrive at Isla de Pinos, later baptized as Isla de la Juventud, for several years worthy of being Isla de los Cítricos (citrus fruit), and always Isla del Tesoro. I got there thinking of that last name. Much later I learned that the Isla de la Juventud was not actually Isla del Tesoro, but the Isle of Many Treasures.

Colonized by the Spanish, recolonized by the Americans from 1898 to 1925, recovered by Cuba, a territory of Caymanian and Japanese emigrants and also many Cubans from so many parts of the Big Island, it was taken by assault by thousands of young people decades ago.

That a municipality has the status of special says a lot. But in reality, the Isla de la Juventud is more special than that condition.

Currently, it is the fifth largest territory among all the Caribbean islands. Therefore, it is more extensive than all the island-states of the Caribbean Sea, except four, one of them Cuba. However, size is not its main hallmark. Unlike other islands in the Caribbean that, like her, are surrounded by salt water everywhere, this one, ours, has fresh water, enough not only because of its 14 dams (if there are still 14), but because it has underground water deposits. Some of them are of very good quality, enough to be bottled and sent to other parts of the Caribbean, which surely import mineral water from other parts of the world.

The Isla de los Tesoros has more than 20 beaches that can be used in tourist projects, a mineral wealth, some relatively valuable, marble deposits, diverse flora and fauna and a sea that, even now, produces one of the most coveted fruits, lobster.

It has a navigable river for a good part of its extension, an area where a relatively deep port could even be built, and two airports, which one day numbered three: one in the north and the other, perhaps no longer in use, in the south.

The Isla de los Tesoros was the first Cuban territory to have a “free zone” and to be an important recipient of tourism (some claim that it was the second tourist destination in Cuba). It was a citrus exporting territory from the very early 20th century and also of cucumbers, eggplants and melons, almost all thanks to the Japanese immigrants.

However, the Isla de la Juventud today does not seem to be that island of treasures, if we look at the recent government visit it received. To export, it depends on an enterprise that is in the capital, says the report of the visit published in Granma newspaper. Perhaps that is the main root of all its ills, in an excessive dependence on the big island.

Undoubtedly, President Díaz-Canel is right when he states that “the main potentialities for the development of the nation are found in the municipality and in that vital space we must look for every idea and resource that can be used. If there is a territory that can become a mirror for the nation in this sense, it is precisely the Isla de la Juventud.”

But the Isla de la Juventud is, in fact, a mirror of the big island. It concentrates and intensifies its features: a large market’s high economic and financial dependence; almost total energy dependence (in the process of being reduced); technological backwardness of its production system (which, furthermore, is not sufficiently complementary); it suffers from the transitive nature of the same blockade as the big island, but suffers it doubly; its population is shrinking and aging (19% are over 50 years old); and that huge country that is only 60 miles away becomes a pole of attraction for its better prepared young people and the population is eminently urban (82%), with 35% not of working age, which poses a huge social and productive challenge.

That’s how great the challenges are for the people of the Isla de la Juventud. That’s how big the attention to be paid to the fifth largest territory in the Caribbean Sea should also be.

Could the island have its own strategy for developing the fishing industry, without having to depend on decisions from the big island, sometimes in the hands of people who have not even set foot in that territory once? How much fishing wealth is left on the island? When that young man who strives to recover the citrus culture and tradition begins to harvest, could he export without having to depend on an enterprise belonging to an agroX group based in an office in the capital?

And its marbles? Will the island be able to market and export them without having to sit at the door of some enterprise X, which has already decided what to do with them?

Will it be able to export its vegetables and fruits to the Cayo Largo del Sur Tourist Destination when it is able to produce them with the appropriate quality, without having to ask for permission? Can its water be bottled and will it occupy a place on the table in the restaurants of the “Destination”? Will it be able to export it to Grand Cayman, always thirsty? Or will someone somewhere think it is a danger to those who already bottle water?

Why is it not possible to think of Isla de la Juventud as a Special Development Zone, grant it tax, tariff and wage incentives? It has everything that is needed: territory, port, airport, proximity to a large market such as Mexico, it is on ship routes, and yachts, it has enough land to supply that SPZ. So, could the people of the Isla de la Juventud launch their own project, learning from the good and the bad of Mariel and thus shortening the times?

Territorial development, undoubtedly important for each of the country’s territories, is decisive for the Isla de la Juventud. If the spaces that this policy should open are decisive for everyone, they are more so for the little island. In it, due to its special situation, one can better appreciate the damage of excessive centralization, verticalism, the “sectoral” conception of development, which has not allowed one of the richest territories in the Caribbean to exploit its advantages, which would allow it to compare earnings with other Caribbean states.

Prime Minister Manuel Marrero is right when he stated that the central government had a high responsibility for the situation on the Isla de la Juventud. It must be attended to, but above all, it must be allowed to be itself.