Flowers don’t need makeup. Never. But nothing and no one is free of the frost during these days of celebration or tribute to Our Lady of Charity of El Cobre, Cuba’s patron saint. 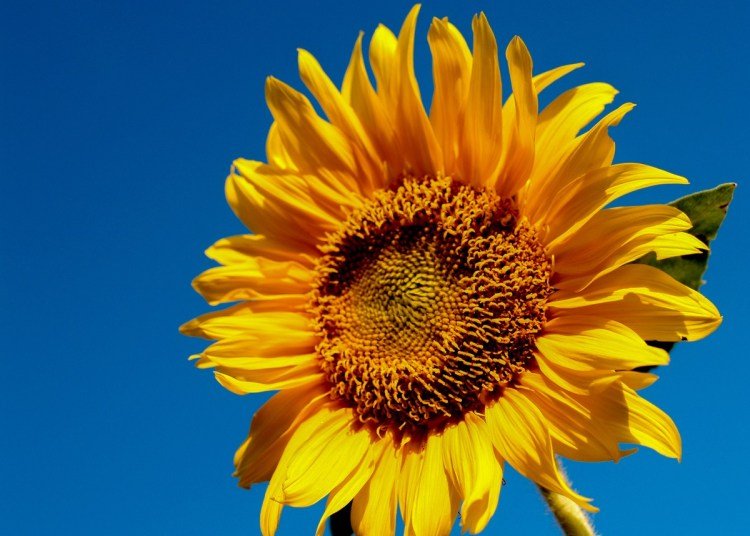 I have to go buy flowers―it was the first thing that came to my mind on September 7. Better today. Tomorrow no one can find yellow flowers.

The two kiosks that sell flowers in the agricultural market changed their format and supply. There were the usual paint cans reused as containers for long-stemmed bundles. But there were also unusual made-up bouquets, each with sunflowers, stubbornly dusted with a silver frost.

Flowers don’t need makeup. Never. But nothing and no one is free of the frost during these days of celebration or tribute to Our Lady of Charity of El Cobre, Cuba’s patron saint, and Oshún, deity of the Yoruba pantheon. The sunflowers were combined with a white flower: lilies, small roses or daffodils.

I plunged into the cans with tied bundles. Digging, I touched the first interlocutor of the day. She was looking at me but wasn’t talking at all with me:

-Oshun, my dear … have you seen how things are? With these prices no one can buy you flowers…. Forgive me!

The stranger ended up buying a sunflower and a daffodil. I left with three sunflowers. Both of us proud with the satisfaction of a duty accomplished.

I had not left the esplanade of the kiosks and I was stopped by an old and a bit weak man.

-Look at how pretty those sunflowers are. Where did you get them? Because these are all squashed together.

-In the other kiosk they are a little better. But I had a hard time, believe me. Go straight to the cans, the bouquets are very expensive.

On the way back, which usually takes five minutes, it took ten. Coming my way another woman starts talking to me four meters before bumping into me:

-Look at you. I have to buy five. I promised her. They are five. Let me see if they don’t run out. Those are pretty good, right? How much did they cost you?

Three minutes later I had more or less the same conversation with an Iyawó. Then, with the grandmother of the granddaughter who was eating a guava tartlet.

When I got to my destination, I had accumulated interactions with people from the neighborhood with whom I had never exchanged a word, and it made me want more. I think that’s why I went to El Rincon.

On the way to El Rincón

Getting to El Rincón is not easy. It depends on which part of the city you are, you must put together your combinations of two, three or four stretches. After several acrobatics in the first, I traveled the second stretch in a “gacela,” those collective transportation buses that in end save my life.

During the trip I looked at the posters and joining them as if they were sentences of the same paragraph. Where in other cities of the world you would find repetitive ads of KFC, McDonald’s, Subway or the corresponding local chain, in Havana there are others: For Havana, the greatest; Fidel, we’re with you; Maceo has as much strength in the mind as in the arm; Crematorium/El Rincón. Arrow to the right.

Every two portals, a kiosk sells yellow and violet flowers. Since I had left the morning flowers at home, I thought of buying some more, to take with me.

The closer you get to El Rincón the prices go up, and also the more the frost there, and your chances of finding loose flowers decrease more. At one point you only find bouquets. Several kiosks had bouquets of flowers above and avocados below. The bouquets at 50 pesos, the avocados at 5 pesos.

I thought about whether Oshún would care if I took an avocado instead of flowers. If I were her, I would prefer avocados. Most people bring flowers. It would not be bad to offer an avocado, which, in addition, for me is glorious. I bought new flowers (I also bought avocados).

The last stretch to El Rincón is done on motorcycles that have trailers behind for collective passenger transportation. There was a small line and a worried man.

-And behind who do you go?

– And behind who does he go?

-Behind the pregnant girl.

-Well, you have to be careful, because people come and sneak in

-Don’t worry, sir―says the first in the line―nothing ever happens here. In this line no one sneaks in. I live near here and I come a lot. Here we all go to the same place, and we look at each other’s faces, and respect each other. Don’t worry, this is not the line to buy chicken.

-Chicken? Where is chicken being sold?

The motorcycle arrives. We quietly climb on but the worried man did not reach a place and had to wait for the next one.

I was accompanied by two families, one of five people (including a baby born hours ago wearing baby clothes with the United States flag on it) and another of three. In the family of five, a tall young woman carried an old small handbag. In the handbag, there was a statuette of San Lazaro or Babalú Ayé sticking halfway out. The saint was dressed up: sequined cape…and a lot of frost.

The other family was silent. They carried nothing; only sadness, or worry, which is sometimes the same thing.

Although it may seem so, El Rincón is not a church. It is literally a nook, a hiding place where people will flee from everything else and meet others who flee, have fled or will flee. In the end, at some point we are all running away from something.

El Rincón and the Sanctuary of Our Lady of Charity of El Cobre in Santiago de Cuba are probably the only places in the whole country where in the same physical space you come close together with such different people. You don’t need to have been born in Cuba to go there. But once you are there, you are from this island, even if it’s for a while. There are no Cubans from inside and outside, there are no Cubans who were and no longer are, there are no Cubans who others believe they are not.

The only thing that reminds you that you are in a church is a sign that reads: you cannot enter wearing jumpers, short shorts or flip flops. But if you arrive with that outfit, you don’t have to leave or carry out your wish from afar. At the door, a lady lends you some very white long dresses so you can cover yourself. I don’t believe Our Lady of Charity really minds. But that’s how it works.

Inside, someone tells the man in the cap to take off his cap, to the young woman who comes out with tears in her eyes that she shouldn’t forget to return the long dress, to the three- or four-year old boy to be silent. Most people say nothing out loud, because they are screaming inside themselves.

Everyone lights a candle on the large aluminum plate. It’s not always possible to buy candles of the corresponding color (yellow or violet, again). Everyone places their candle, their light, the color they can get or want. The surface ends up having wax of all colors, a little mixed and a little intact. I look at the collage and I think it looks like a flag of diversity. It surely is.

I light my candle with the flame of one that is already lit and that someone lit to make a wish or give thanks for something that I don’t know about. As I make my wish and give thanks, I receive the light from another person, and I give light to the one who comes behind me, and who will light his flame with mine.

Every September 8, El Rincón and its surroundings welcome more people than usual. I always go even if I’m not in Havana. I don’t know if who I am looking for is Oshún and Babalú Ayé, Our Lady of Charity of El Cobre and San Lázaro, or if what I’m looking for is a place where the first woman of the flowers, the weak man, the Iyawó, the woman with the five sunflowers, the worried man who was looking for chicken and certainty, the woman who was certain, the sad family, the tall girl with her dressed-up statuette, the newborn, the one who delivers the long dresses, the one who lit the flame from my candle, the frost that I don’t like but that accompanied me, and myself. Cachita, it’s not easy.