The monarchs, who this Wednesday made a tour of the historic center of Havana, received the “Giraldilla,” the symbol of the Cuban capital, from the city’s highest authority. 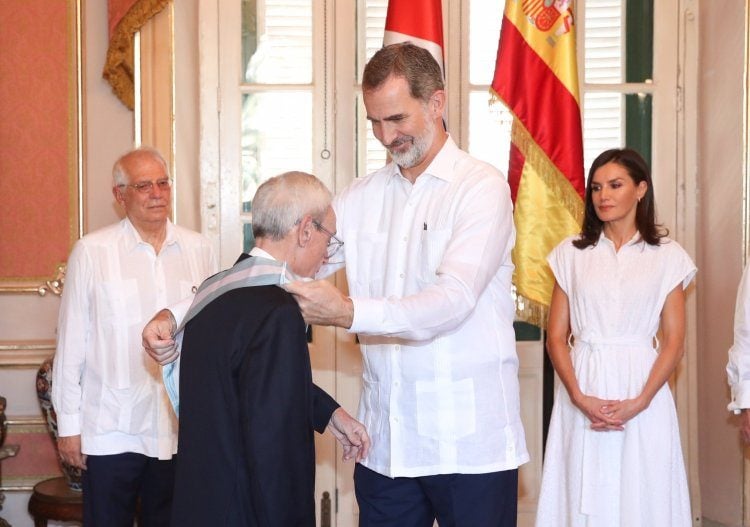 Felipe VI of Spain decorates historian Eusebio Leal with the Grand Cross of the Royal and Distinguished Spanish Order of Carlos III, in Havana’s Palace of the Captains General, on November 13, 2019. Photo: @CasaReal / Twitter.

The king and queen of Spain, on a visit to Cuba, this Wednesday decorated City of Havana Historian Eusebio Leal after a tour of the historic center of the Cuban capital during which Leal was their guide.

King Felipe VI decorated the historian with the Grand Cross of the Royal and Distinguished Spanish Order of Carlos III, granted by the Spanish government in recognition of Leal’s work at the head of Havana’s restoration. The ceremony took place in the Palace of the Captains General, the island’s former government house during colonial times and today the headquarters of the City Museum.

It is the most distinguished civilian decoration that can be granted in Spain, established in 1771 by King Carlos III, which Leal adds to another conferred by Spain, the Grand Cross of the Order of Isabel la Católica, granted in September 2017, according to Prensa Latina news agency.

After receiving the distinction, Leal, 77 and in a somewhat delicate state of health, recalled the historical links between Cuba and Spain, and spoke highly of Spain’s contribution to the island’s culture and idiosyncrasy.

Also in the Palace, the president of the Provincial Assembly of Havana, Reinaldo García Zapata, gave Felipe VI the “Giraldilla,” the symbol of the Cuban capital. The ceremony took place in the courtyard of the monumental building and before the marble statue of Christopher Columbus.

The statuette, which stands atop the Real Fuerza Fortress, was carved in the mid-17th century in the style of the one in Seville’s cathedral, known as the Giralda.

The second day of Felipe and Letizia of Spain’s stay in Cuba began with a visit to the place where Havana was born, three days before the 500 years of the city founded by Spanish settlers will be commemorated.

After their tour this Tuesday through some of the historic center of Havana’s streets, the monarchs returned guided by Leal, the director of the Office of the City of Havana Historian and the architect for decades of the restoration of its architectural heritage.

Felipe VI, again wearing a guayabera shirt, this time white, and the queen, with a dress of the same color, began the tour in the Templete, the point where in 1519 the first town hall and the founding mass were celebrated next to a ceiba tree.

According to tradition, hundreds of people come every November 16 to the small neoclassical building, built in 1828 by Fernando VII, to go around the ceiba three times, throw some coins in the air and make a wish.

The king and queen did not participate in this ritual, but in the shade of the ceiba tree―the original survived until 1753―they listened carefully to Leal’s explanations about the symbolism of the place. The event was also attended by Spanish Minister of Foreign Affairs Josep Borrell, the president of the National Assembly, Esteban Lazo, and that of the Havana Assembly, Reinaldo García Zapata.

Together with the entourage, Felipe VI, with the municipal hand cane, and Letizia crossed the park of the Plaza de Armas, outlined in 1520, which makes it the oldest of the four colonial-style squares of the historic center of the city, and where the statue of Carlos Manuel de Céspedes, Hero of the Cuban Nation and first president of the republic during the war of liberation against Spain, is erected.

Upon arriving at the Palace of the Captains General, the royal cortege stopped before its facade, featuring the Havana shield that the monarchs gave to the now City Museum on the occasion of their historic visit for such a special date as the 500th anniversary. It is one of the most special gifts that the Spanish Crown has made for the occasion, being a hand-made tapestry from the Royal Tapestry Factory.

The Palace replaced the red and yellow flag in the throne room in March of last year as indicated by Eusebio Leal, placing it alongside the flags of the countries that supported Cuba on its path to independence.

“A part of the restored history is in this room,” said Leal, who is still heading the restoration of the historic center of Havana, which UNESCO declared a World Heritage Site in 1982.

One of the attractions of the Palace is the “Untouched Throne of Havana,” which has been waiting for a king of Spain to sit on it since 1791, when the building was finished. A wait that Felipe VI will prolong, as did his father, Juan Carlos I, when he was in Havana in 1999 on the occasion of the Iberian-American Summit.

“I wouldn’t have fit in it. I would have had to sit in it with all the Spaniards,” said Don Juan Carlos to justify his refusal.

The king and queen will return tonight to the Palace of the Captains General to offer a dinner for Cuban President Miguel Díaz-Canel. There Felipe VI will deliver the most important speech of his visit to the island, which will conclude this Thursday, when the royal couple travel to Santiago de Cuba.