Every year more than 25,000 Cubans arrive in Russia, where they don’t need a visa for three months; but, of these, only about 25% register with the Russian immigration authorities, according to data from the United Statistical System of Russia (EMISS). 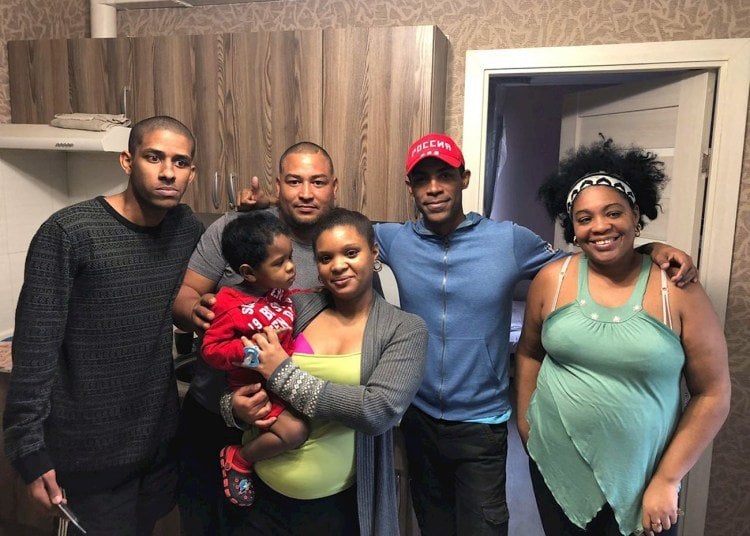 More than a hundred Cubans who’re in the business of reselling merchandise, known on the island as “mules,” are still stranded in Moscow, a city they barely know and where a language they don’t master is spoken. The coronavirus pandemic has left them trapped: the city closed its land and air borders, and has imposed confinements to stop COVID-19, which prevents them from working to survive or returning home.

“People who travel to Russia to buy merchandise for Cuba usually come for seven days, because a long stay does not give them a profit,” explains Pedro Luis García, a Cuban who has lived in Moscow for eight years and supports his fellow citizens with legal advice and food aid.

Now, many have been locked up for almost two months, with no money to eat or pay the rent. They also have no return date in sight. García indicates that more than 20 people can live in just one apartment in rooms with three or four bunkbeds and with the corridors full of bales with merchandise.

But, those who return are not the only Cubans who find themselves in a difficult situation in Russia due to the restrictions imposed to contain the coronavirus. Those who arrived with the intention of staying and starting from scratch also have a hard time.

“It is not easy,” Yadira Mendoza, a native of Santa Clara, confesses sadly.

The COVID-19 has confined her to the apartment of a modular building in a dormitory neighborhood in southern Moscow, where she shares a roof with her husband, brother and three other people.

They live crowded in two rooms in poor condition and with the minimum necessary to live. And they are in an irregular situation.

Yadira does not give up and hopes that everything will improve, because she is in Russia “for the family” and does not plan to return to Cuba, where she sold her house to conquer new horizons.

Pedro Luis García explains that many arrive in the country without having previously been informed of the laws and without knowing the language, which makes them vulnerable to abuse and scams.

Remember that several of them were told in Cuba that Russia belongs to the Schengen area, so they could use that country as a springboard to reach the Old Continent. They didn’t get information before burning their bridges at home.

“If you give a Cuban work, he’ll does whatever he has to do, but we have to be paid,” says Yuvani Marquetti Elías, a native of Alquizar, in a house on the outskirts of Moscow.

Yuvani belongs to the group of Cubans who feel they were deceived. “We came with the idea of ​​getting ahead, of working,” he says.

He affirms, without being able to contain his anger, that he has been paid 3,000 rubles (less than 50 dollars) for two months of work in a store, taking advantage of his undocumented immigrant status.

He lives with his family in a half-built house: the concrete blocks on the wall are bare, which does not prevent the owner from asking for a monthly payment of 36,000 rubles (about 500 dollars), a sum they don’t have.

He has even had to ask relatives in Cuba for support to pay the rent, while for food he depends on the help provided by volunteers like Pedro Luis.

This law graduate who teaches Spanish in Russia can’t offer much.

He can barely give needy Cubans two bags full of macaroni, flour, oil, spices, onions, eggs and a chicken. He also brings them toiletries.

He affirms that some Cubans he visits live in “terrible conditions” and remembers an aid package delivery at a house without heating, without water and with a bathroom outside where 39 compatriots lived, including a small child.

“In the time I’ve been doing this, around 500 people have contacted me,” he says.

Almost all those who embark on the Russian adventure do so without notions of the necessary procedures to legalize their immigration status, and even for those with some knowledge the process is arduous.

“It’s like a labyrinth with no way out,” Idalmis Moreno, trapped for two years in a swamp of bureaucracy, sums up her desperation.

It was useless to start the procedures according to Russian law: she’s still waiting for the authorities’ response. And if she still has vestiges of patience, the money ran out long ago.

She shares a threadbare sofa bed with her husband and her 78-year-old mother, who has a string of diseases, in an apartment on the outskirts of Moscow with her daughter, son-in-law and three granddaughters who have not attended school for two years.

“It hurts to see these people in these conditions, two years trying to legalize their situation,” says Pedro Luis.

Idalmis’s daughter has tried to return to Cuba with her three daughters, but the renewal of the four passports costs 32,000 rubles (about 438 dollars), a prohibitive sum for her.

Even if she managed to raise the money, the absence of international flights would not allow her to return now to the island, as is the case with other Cubans stranded in the Russian capital.

The Cuban Consul in Moscow, Eduardo Lázaro Escandell Santana, assured EFE that the Embassy and the Consulate maintain “permanent communication” with all Cubans who have contacted the diplomatic mission and they have been oriented on how to extend their stay or regularize their immigration status.

He also emphasizes that they have been offered options “to meet the needs of those with financial and housing difficulties.”

Since Cuba repealed the so-called “exit permit” in 2013, Russia has become one of the non-Spanish-speaking destinations that thousands of Cubans turn to in search of a better future.