The gas deficit has made it necessary to extend the period of delivery to all customers, both those who acquire it in a regulated manner by family nucleus composition and those who buy it in a liberated way. 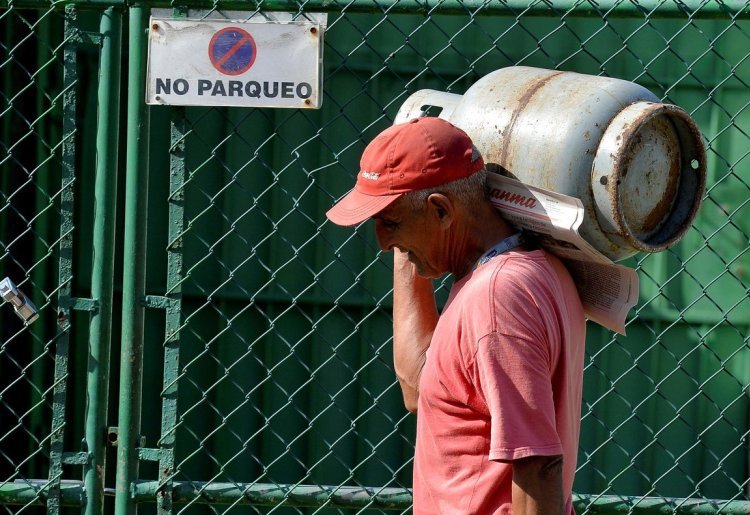 Cuba produces 97% of the oil associated natural gas that is used for power generation and domestic consumption in Havana. Photo: AFP

The reduction in imports of liquefied petroleum gas (LPG) for domestic use in Cuba, which the government attributes to the intensification of U.S. sanctions, affects the supply of more than 1.7 million customers, the state-owned company Cuba-Petróleo Union (CUPET) reported this Wednesday.

The LPG deficit has made it necessary to extend the period of delivery to all customers, both those who acquire it in a regulated manner by family nucleus composition and those who buy it in a liberated way.

In the case of two-people households, they will be able to buy a gas cylinder every 35 days and, according to the established scale, the cycle goes down for those with more family members up to those up to ten, who will receive it every 16 days, a note published on the Cuba-Petróleo website said.

But for consumers who freely buy that product, including private sector workers who use it in businesses such as restaurants and coffee shops, the measure extends the cycle up to 60 days to acquire one of these cylinders.

Likewise, the company belonging to the Ministry of Energy and Mines urges the population to adopt measures for saving and efficient use of liquefied gas.

The head of domestic fuels of CUPET, Lucilo Sánchez, said to the state media that Cuba is looking for new LPG suppliers in Europe to replace the deliveries that the suppliers contracted by the Cuban company Corporación Panamericana S.A. refused to make by the end of December 2019 and early January this year, as planned.

The possible new markets are distant and it was decided to extend the delivery cycle both to the 872,252 customers who buy it in a “regulated” manner and to the 830,972 who acquire it in a liberated way, said the official.

In that regard, he warned that there will be “greater limitations” for domestic fuel consumers in both the state and non-state sectors, including those who manage certain private businesses, and stressed that the priority is the population and state centers or institutions that provide basic services.

He also pointed out that the situation with the supply of the gas cylinders is “complex” because on the island only about 20 percent of the volumes needed to meet the demand can be produced.

However, he indicated that “there are no difficulties” for the consumers of manufactured gas, which is processed from the existing oil fields in the northwestern part of the country.

Cuban oil production covers approximately 48% of the national energy demand, and the island produces 97% of the associated natural gas that is used for power generation and domestic consumption in Havana.

A CUPET statement released last Monday to announce difficulties in the import of LPG recalled that during 2019 the U.S. Government imposed new and successive sanctions on companies, shipowners, ships and insurance companies with the aim of preventing the arrival of fuels to Cuba, including the Corporación Panamericana S.A., created in the 1990s.

Last September the island went through a complicated energy situation because it temporarily stopped receiving oil due to U.S. pressure on the shipping companies to prevent the arrival of fuel to Cuba in retaliation for its support to Venezuela, its main supplier.

In recent months, the Washington administration has applied new sanctions against Cuba that have had a severe impact on its economy, in retaliation for Cuba’s alleged interference in the Venezuelan crisis and its unconditional support for President Nicolás Maduro.

Since arriving at the White House in January 2017, U.S. President Donald Trump has strengthened the policy toward Cuba with reductions in diplomatic personnel, increased trade embargo, cruise restrictions and restrictions for Americans to travel to the island.