Members of the Culinary Federation of Cuba will support the training and improvement of both the administrators and the workers of state gastronomic centers, as well as the rescue of typical and traditional dishes in these facilities. 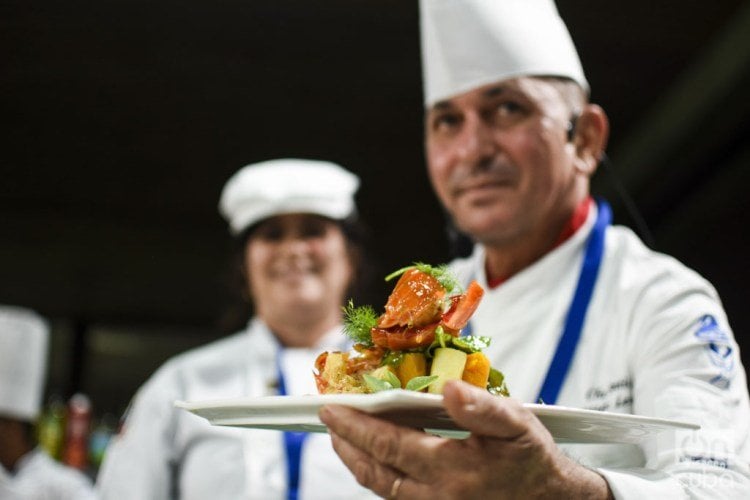 Cuban chefs during the 7th International Culinary Festival, in Havana, from October 14 to 18, 2019. Photo: Otmaro Rodríguez.

Chefs from the Culinary Federation of Cuba (FCC) will contribute with the island’s Ministry of Domestic Trade in the “complex process of transformation of national state gastronomy,” said Domestic Trade Minister Betsy Díaz.

The culinary specialists will support the training and improvement of both administrators and workers of state gastronomic centers, as well as the rescue of typical and traditional dishes in these facilities, and the export of services and other elements of Cuban cuisine, Díaz said at a FCC national meeting.

The minister also explained that the members of the Culinary Federation will be part of the working groups, judges and commissions that will decide who will manage the gastronomic units, “so that they can transform their current situation and become administrators with true skills,” pointed out a report by the Agencia Cubana de Noticias (ACN) news agency.

Díaz praised the FCC’s work “to safeguard and defend cuisine as culture, history and tradition” and asked its chefs and other members to contribute to the “ambitious and profound transformation” of state gastronomy, in which, she said, there is a “noticeable deterioration.”

The minister recognized “lack of indiscipline” and “poor service” in state restaurants and cafeterias, and stated that “a great deal of quality has been lost, and even, sometimes, the technical standards and technological plans are not respected, and there is a lack of motivation and desire to cook well.”

She also defended the export of Cuban culinary services as a way of “attracting income to the country,” and announced the holding at the beginning of February of the First Meeting of Gastronomic Techniques in Cuban municipalities, and in September of the national meeting.

For his part, chef Eddy Fernández, president of the FCC, supported the minister’s request and favored the inclusion of the members of his organization “in the rescue of the competitions of gastronomic techniques, and in increasing professional improvement and training,” according to the ACN.

Fernández said that the training and preparation of gastronomic personnel “represent today the number one priority” of the FCC, “whose benefits are always reverted to a better service for tourism and its steady and safe growth.”

Cuban cuisine was declared a cultural heritage of the nation last October, during the 7th International Culinary Festival held in Havana and organized by the FCC. This organization was established in 1981 under the leadership of famous chef Gilberto Smith and currently has about 65,000 members, both in the private and state sectors.