Trumpism finds us unprepared for the cruel and illegal measures designed to inflict suffering on the Cuban people. 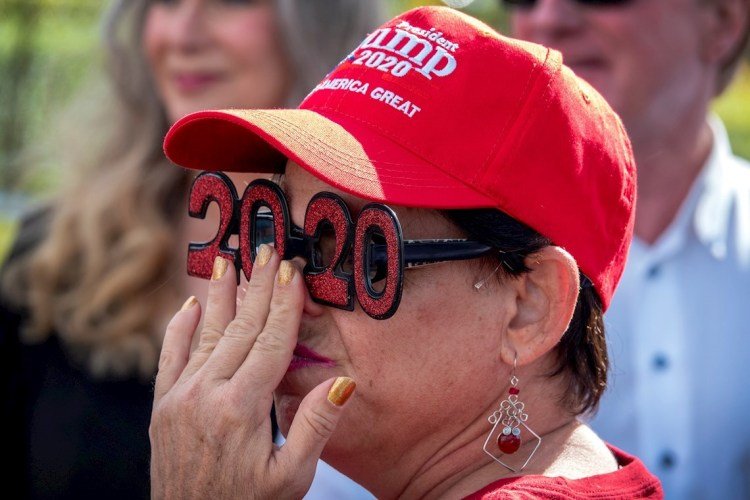 Trumpism has arguably caught Cubans off guard, some of us dumbfounded and others complicit before the swelling crowds chanting “Send them back!” at Trump rallies; anxious as we watch the new Commander in Chief inciting his followers; disturbed, many of us, by the latest measures the Trump administration has taken against the Cuban government that will surely win political points among the exile establishment in South Florida but that in no way reflect the increasing diversity and, indeed, the sharp divisions in the Cuban American community.

Trumpism finds us unprepared, moreover, to respond in rational, coordinated ways to a further ramping up of the cruel and illegal measures designed to inflict suffering on the ordinary Cubans that the architects of the embargo had in mind when, sixty years ago, they prescribed measures that would bring about “disenchantment and disaffection based on economic dissatisfaction and hardship.” The ultimate goal, of course, has always been to bring about “hunger, desperation, and the overthrow of the government.”

It is possible that many Cubans don’t feel that the chants at Trump rallies refer to them at all, that the surge in xenophobia and nativism don’t really apply to Cubans, who have always enjoyed a privileged immigration status relative to Mexicans, Central Americans, Haitians. After all, Cubans tend to think of themselves as highly adaptable to the demands of the free market, as an especially enterprising subset of Latin American immigrants, constitutionally opposed to state interference in the life of the homo economicus. They may even imagine that the Trumpists understand these differences.

Perhaps our paralysis before the new demagogue should not surprise us. Our cultural and political identity is still consistent with the way that Professor Gustavo Pérez Firmat characterized it in the nineties. After all, the author wrote with his customary wit, the Cuban American is not “oppositional” but “appositional.”

The emblems of Cuban American culture at that time were Desi Arnaz and Gloria Estefan. Opposition and dissent only made sense on the other side of the Florida Straits. Here on the mainland, what would be the point of opposition and dissent? What could “dissident” mean in South Florida? Cuban American culture was, Pérez Firmat observed, “shamelessly materialistic,” and the implicit rejection here of that other materialism, dialectical materialism, was something to be proud of. The authentic Cuban ethos realized itself in this best of all posssible worlds here, north of Cuba.

Pérez Firmat’s Life on the Hyphen and The Cuban Condition, perhaps the foundational texts of Cuban American identity, privilege one generation in particular as capable of articulating the collective identity, as especially fit to navigate the cultures of both Cuba and the United States. What Pérez Firmat, following sociologist Rubén Rumbaut, calls the 1.5 generation comprises those immigrants old enough to remember living in Cuba but who came of age in the United States. These are the virtuosi of transculturation, the generation most capable of inhabiting two linguistic, cultural, political worlds. Decades later, the Cuban immigrants who lived in Cuba and remember it vividly still exercise authority in defining the collective ethos, in elaborating the official exodus narrative, and in identifying the infractions of agreed upon norms.

The Grammy Award-winning trumpet player Arturo Sandoval recently used Facebook to reproach the entertainer Pitbull for shouting out greetings to Gente de Zona from the stage at a concert at Bayfront Park on December 31. Gente de Zona are popular Cuban musicians whose appearance at the concert had been canceled following protests in Miami. Sandoval later deleted his post, and Pitbull apolgized for greeting Gente de Zona. This is the sort of policing of political and cultural boundaries that still falls to the old guard, to the so-called exilio histórico.

But those borders are arguably less and less fixed as the years go by, and Trumpism should impel us to reconsider those borders, or to imagine new maps altogether. Pitbull, born Armando Christian Pérez in Florida in 1981, is still the product of a history of exile and a member of the Cuban American community. He is not, however, an exile with memories of Cuba, not one of the exiles who made the exile community, and in this sense he is “deauthorized.” Tellingly, the tension was “resolved” in a televised interview with Jorge Ramos, in which Pitbull offered a kind of mea culpa or autocrítica.

In Life on the Hyphen, Pérez Firmat saw his own children, born in the United States, as people whose relation to the Cuban experience was essentially passive. “Their cubanía was second-hand, a bond,” Pérez Firmat writes, “forged by my experiences rather than their own.” In fact, the metaphor that the author chooses for passive cubanía is none other than second-hand smoke. “Cuba is for [second generation Cuban Americans] as ethereal and as persistent as the smell of their grandfather’s cigars (which are not even Cuban but Dominican).”

But if figures like Pérez Firmat and Arturo Sandoval (their very different immigrant stories notwithstanding) retain enormous cultural capital, maintain the discursive authority to articulate the collective ethos and to fix ideological and generational borders, one has to ask: What happens when second and third generations, or indeed more recent waves of Cuban immigrants, begin to contest that authority? What happens when some of them, inevitably, fail to ratify the dominant exodus narrative, or reimagine the nation where their parents and grandparents sought refuge? Will the younger generations assume a passive role vis a vis cubanía? Will they forge their own bonds with Cubans, Cuban history, and Cuban culture? And what if they dare to suggest that the nostalgia-inducing second-hand smoke of earlier generations had some noxious effects?

There are indications that the Cuban-American consensus forged in the Cold War years is losing its grip on younger generations and more recent arrivals. The Cuba Poll conducted by the Cuban Research Institute of Florida International University indicate very clearly that the narrative that gets the most press in the Miami news outlets fail to capture the complex and diverse community that has been evolving for decades. For example, almost half of Cuban Americans, or 49%, oppose the trade embargo that the United States has imposed on Cuba for almost sixty years. And among Cuban Americans between the ages of 18 and 39, 65% oppose the embargo. The established authorities will continue to make pronouncements on behalf of the Cuban American community, naturally, but if the consensus ever really existed, it is surely imaginary now.

The year 2019 saw the publication of Let’s Hear Their Voices, the first anthology of poetry, prose, and drama written by second-generation Cuban American writers. The four words of the title might sound unassuming to the casual observer, but to those of us keenly aware of the radical discursive asymmetry between the exilio histórico and later generations, the title borders on manifesto, in the best sense of the word.

Few cultural dramas have cast the divisions and misunderstandings between generations into such sharp relief as the one that followed the student protest March for our Lives, organized in response to the school shooting at Stoneman-Douglass High School in Parkland, Florida, just outside of Miami. One of the protagonists of this movement is a young woman named Emma González, daughter of a Cuban father and an American mother. Ordinarily, this young woman might be dismissed as a pichón de cubano, completely unauthorized to pronounce on anything Cuban American, given her limited Spanish and her American, English-speaking mother. She is not only second generation, but also of mixed parentage.

She might have gone unnoticed by Cuban Americans, then, except that she appeared on stage at the march in Washington, DC wearing an olive drab jacket with a Cuban flag patch on the shoulder. She not only assumed the role of “author” and activist, but she made at least a small symbolic claim to a connection with Cuba. This constituted an ofensa against the exilio, and the writer Cuban exile writer Zoé Valdés took to the internet to set the record straight and put the young activist in her place.

Writing from France, Zoé Valdés lambasted the young activist with the buzz cut and the olive drab jacket, the young activist who in Cuba would have been derided as “machorra,” “marimacha,” “bombera.” The young woman, who only weeks earlier had lost seventeen classmates at the hands of a shooter, appeared, to top it all, “with the easy laugh or the convenient tear, whatever the theater of the aburd demands” (“para colmo… con la carcajada o la lagrimita fácil, según lo que toque en el teatro del absurdo”). From the perspective of Zoé Valdés, the school shooting and arguments about the Second Amendment and the student protest were distractions from the real event—the inauguration of a new icon of the international left, “que formara y forme parte del caudillismo internacional de la izquierda.”

Emma González’s words weren’t the important thing. There was no need to “hear her voice” because the significant elements of the mise en scene were in fact the haircut, the jacket, the Cuban flag. Zoé Valdés had arrived from another continent and another generation, but from the epistemological source of national symbols itself to explain to the world the true significance of these elements in the theater of the absurd. Emma González aspired, absurdly, to protagonism, to authorship, when in fact she was a mere puppet. All that was left was for her to start spewing communist slogans, “¡Pioneros por el comunismo! Seremos como el Che,” and these, Valdés assured us, would come soon enough.

But what is repressed returns, and the grands recits of the foregoing generations give way, eventually, to younger voices and new emancipatory impulses. Trump, predictably, tries to silence and ridicules Greta Thunberg, Zoé Valdés, predictably, tries to silence and ridicule Emma González, but these young women will have their say, and they have many years stretched out in front of them. Let’s hear their voices.

In a historical moment in which the “Washington consensus” unravels and neoliberal articles of faith give way, according to the Nobel laureate economist Joseph Stieglitz, to a “rebirth of history,” in this historical moment in which Trumpism, in spite of its Make America Great Again slogan in fact dramatizes a crisis of faith in the established politico-economic orthodoxy, it is incumbent on Cuban Americans to reconsider our own role in the nation where our parents and grandparents sought refuge, time to re-think our more “appositional” than “oppositional” role, time to imagine alternative futures.

Perhaps, for example, Miami’s “shameless materialism” does not constitute the ultimate horizon of our expectations and in no way prepares us to deal with this critical historical juncture. If emancipation is still our end, and the Calle Ocho paved by the exilio histórico turns out to be a dead-end street, perhaps dissent and contestation are the only way out. The organizing principles of this oppositional culture will turn out not to be cultural identity or tribal belonging at all, but rather a loyalty to fundamental democratic principles. It behooves us to read not only on Pérez Firmat’s reflections on the Cuban condition, but also Edward Said’s memoir Out of Place, in which he exhorts us to privilege intellectual integrity above national consciousness or tirbal identity, “no matter how solitary that [makes] one.” Emma González and Greta Thunberg surely know something about this solitude, but they continue to speak, and it is time we learn to listen.