The history of the Panamanian diplomatic venue and Cubans had its “days of glory.” But they are now a shadow of the past. 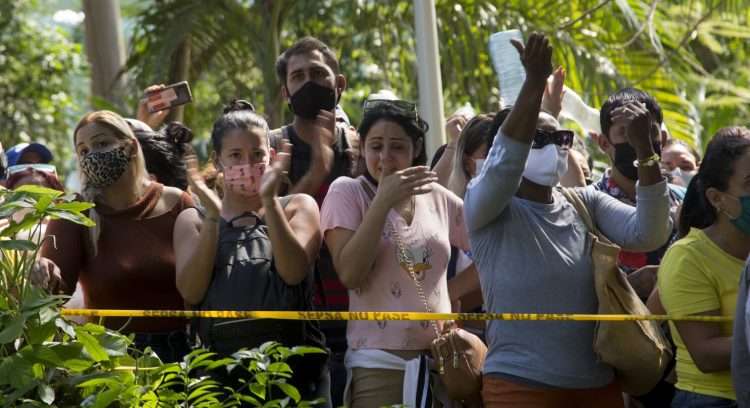 Group of Cubans line up in front of the Embassy of Panama in Havana. Photo: Ismael Francisco/Associated Press (March 10, 2022).

Any user who visits the Facebook official profile of the Embassy of Panama in Cuba will immediately perceive that the most recent procedures of its consulate have made Cubans feel nothing short of betrayed. The reactions of hundreds of Internet users on the island to the publications of almost all this 2022, and even a little earlier, in the institution’s profile are a sign of this.

The history of the Panamanian diplomatic venue and Cubans had its “days of glory.” But they are now a shadow of the past. Between what was lived a few years ago and the most recent experience, the contrast is undeniable.

From Tourist Card to Transit Visa: two sides of the same coin

The very famous Tourist Card to travel from Cuba to Panama was established in October 2018 by then Panamanian President Juan Carlos Varela. Through a government decree, his administration made the entry of Cuban citizens who traveled to make purchases or visits to his country more flexible.

To acquire the document, it was only enough to show the applicant’s identification as a self-employed worker at the Consulate or demonstrate that he/she had previously traveled to the Central American nation, or to a third country. In addition, it was required to have a round trip ticket to Cuba. The Card authorized only one entry, but allowed a stay of 30 calendar days, and cost 20 dollars (CUC, then in force).

Under the Varela administration, Panama changed its immigration policy towards Cuba, whose nationals had to go through a cumbersome and time-consuming approval process to receive a tourist visa, which was made more flexible with the so-called “stamp,” granted by the accredited consul in Cuba, and that continues to this day.

Through the Tourist Card, tens of thousands of Cubans traveled to the Panamanian isthmus, basically — although not as the only reason — to buy all kinds of merchandise that they could later resell for up to four times their price on the island.

Those who traveled to make purchases invested millions of dollars there. Re-exports to Cuba from the Colon Free Zone (ZLC) totaled 335.5 million dollars in 2018 alone, the year in which 34,500 Cubans entered the ZLC between January and September. But somehow it was a win-win situation.

To apply for the Card, those interested stood in a physical queue for several hours outside the venue, but they were seen to during the day. The queue could gather hundreds of people in a single day, because the document was in high demand.

Despite the exhausting and seemingly endless queues, practically no one was denied the Tourist Card, and in one day the process was resolved.

But in March 2021 this document was eliminated. Since then and to this day, the provisions and procedures have gone from bad to worse for Cubans.

The imposition of the transit visa, for an indefinite time, came only a year after the suspension of the Tourist Card. Unforeseen, arbitrary and without concessions, it was established to make it difficult for nationals to travel to that country.

Executive Decree No. 19 published on March 8, 2022 in the Official Gazette of the Republic of Panama, provided that every Cuban citizen or crew member needs a transit visa to make a stopover in the country, either to fly to another territory or return to Cuba.

For the residents of the island, this was a bucket of cold water. Since the time of the Tourist Card, Panama was part of the route of hundreds of Cubans on their journey to the United States through Central American territory. But not all those who left for that country headed for the United States.

In general, the travel restrictions imposed by the COVID-19 pandemic in Cuba and the world limited the possibilities of going abroad for nearly two years. The reopening of Cuban borders in November 2021 re-invigorated departures abroad for various reasons. Meanwhile, the visa-free exemption between the island and Nicaragua catapulted illegal migration.

For Cubans wishing to emigrate by land, Panama can be both the territory of origin of the route and the country where it is necessary to make a stopover to continue by plane to Nicaragua, a territory a little further north, and from which fewer countries have to be crossed on the way to the United States.

However, not all Cubans who booked their air tickets with a stopover in Panama did so for emigration purposes. Despite this, the current government of that country, headed by Laurentino Cortizo, established the requirement of a transit visa.

In the current context, the decision to impose this permit can only be understood as a nod to the northern neighbors, who exert pressure to contain the wave of emigrants — not only Cubans, of course — towards their country. In addition, and no less important, it is a decision that allows Panama to collect thousands of dollars for this concept.

All this to the detriment of Cubans, who have had to add the 60 USD worth of this travel permit to the already many expenses involved in leaving the island, and also accept the very objective possibility that the permit will be denied.

The real effects on the plans of many nationals led hundreds to demonstrate for more than 24 hours outside the Embassy in Havana after the announcement of the Decree. In those days, many missed their flights or had to invest even more money in rescheduling them. Of course, their protests to revoke the visa requirement went unheeded.

The process has continued to this day. On June 6, 2022, the government of Panama issued Executive Decree No. 48 which extends the mandatory nature of the transit visa for passengers and crew members with Cuban nationality for three more months from its promulgation this June.

After several months of its imposition, this regulation finally exempts from transit visas nationals who have a valid tourist visa in Panama; and those who have permanent residence for five years or more in a third country and are on a return trip to the same from Cuba.

Of procedures, consular prices and other demons

The transit visa application procedure is cumbersome. The appointment request is made online, with all the inconveniences that this implies, but the interview is personal at the Embassy. The results are communicated through the official profile of the Embassy on Facebook and those who are approved must return to the Embassy to have the visa stamped on their passport.

In this social network, users report inconveniences due to delays in visa processing, and irregularity in the publication of lists of those who are approved or denied. The government has extended the processing time from 15 to 30 days. And the delays are not considered.

The results of the stamped tourist visa procedures are also published on the Embassy’s Facebook profile. With this procedure numerous and fair disagreements are registered.

After the elimination of the Card, this visa remained the only way for Cubans to enter for reasons of visiting that nation. However, also since the disappearance of the Card, the granting of this type of permit has been reduced to a minimum. The published lists show that the number of those denied a visa doubles and even triples those approved.

Among Cubans, in addition to this arbitrary cause, the main dissatisfaction lies in the fact that appointments must be scheduled online, and the mechanism is not at all simple.

On the other hand, the same Internet users report that online appointments, when “someone” takes care of doing it for you, currently cost between 600 and 700 USD. To this is always added the risk of being scammed and losing the money invested.

On June 10, 2022, the Embassy suspended its consular services due, as notified, to the entry into force of instruction 1/2022 issued by the Central Bank of Cuba (BCC), which modified the regulations on transfers in Cuban pesos or dollars from accounts of Embassies and Consulates in Cuba abroad.

After not working for more than two weeks, the venue reopened on the 29th of the same month. The system to make and/or reschedule appointments was still not working on July 4th.

Due to the BCC disposition, the consular costs began to be charged in Euros. Faced with the decision, those who do not receive this currency through family remittances are forced to buy the currency in the informal market — the only means through which one can find them —, where prices exceed 120CUP=1EUR.

The dissatisfaction of the residents on the island is multiple and not gratuitous. For all the procedures, Cubans must travel from anywhere in Cuba to Havana, pay for the expenses, pay for the consular services, and deal with the irregularities of the processes, the difficulties in scheduling an appointment, and the increasingly distant possibility of being approved.

The messages on the networks do not beat around the bush: the feelings of Cubans go from annoyance to anger. Exhausted, extorted and needy. They are the big losers against a system that surpasses them and that none of their complaints or pleas seem to move.