Russia, a lifesaver for Cuba?

The increase in trade relations with Russia could mean vital oxygen for the Cuban economy, in a critical state. 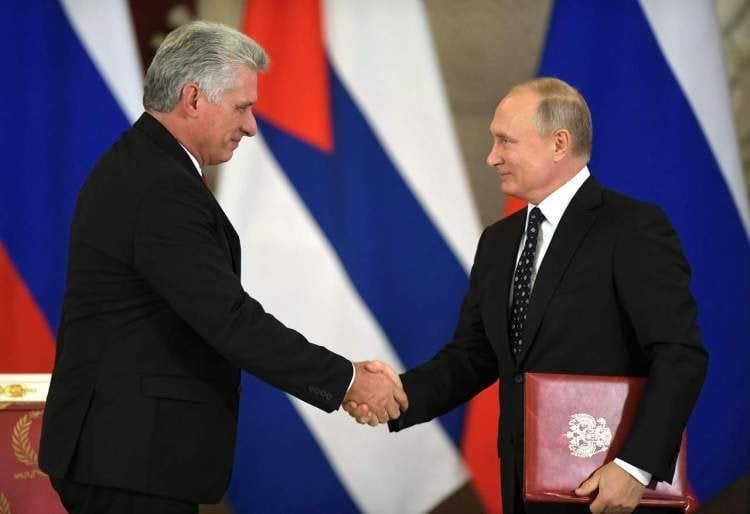 The presidents of Cuba and Russia during Miguel Díaz-Canel's visit to that country in November 2018. Photo: AP.

In the midst of the energy crisis affecting Cuba in recent days and the consequent announcement by President Miguel Díaz-Canel of the start of a “temporary” situation that is intensifying the country’s battered economy, Russia becomes reinforced on the horizon as a lifeboat to again rescue the island and its inhabitants from an unimaginable scenario.

Like more than two years ago when Russia began sending large quantities of oil to Cuba, after the decline in supplies to the island by Venezuela, Moscow reappears to try to alleviate the complex situation and give support to the Caribbean authorities.

The fact is that the Russians consider Cuba is a strategic ally in the Western Hemisphere: “There is a common interest, not only of an economic nature but also of a political nature,” the general director of the Russian National Committee for Economic Cooperation with Latin American Countries, Tatiana Mashkova, affirmed to the Sputnick agency, and later stated: “We know that Cuba is experiencing quite difficult times. But I believe that together we will overcome them.”

This was ratified by the vice president of the Cuban Council of Ministers, Ricardo Cabrisas, who said that “Cuba and the Russian Federation have excellent relations characterized by a very high level of political dialogue, important coincidences on issues on the international agenda and the sustained progress in recent years of links in the commercial and financial fields of cooperation.”

That is why the Cuban government is focusing its hopes on Russian investments and businesses that can be established after an intense week of negotiations with the Slavic partners that included the 10th Meeting of the Russia-Cuba Business Committee, Cuba’s first National Exhibition in Russia and the 17th meeting of the Russian-Cuban Intergovernmental Commission.

Energy in the spotlight

The energy crisis affecting the island is well known to all and, therefore, cooperation in this area was a priority on the agenda of Cabrisas, who held a working meeting with Russian Deputy Minister of Energy Pavel Sorokin. It was also the main point of analysis of the Intergovernmental Commission, which among other aspects specified the “Roadmap for the effective participation of Russian energy companies in the program Development of the fuel and energy sector and the strengthening of the energy security of the Republic of Cuba,” a document signed by the Russian Deputy Minister and his Cuban counterpart Yuri Viamontes Lazo.

Earlier this year, both countries agreed to this roadmap on cooperation in the field of energy in 2019, and decided to create a working group to implement projects aimed at modernizing Cuba’s energy sector with the help of Russian companies.

At the time Cabrisas reported on a program up until 2030 to “increase the efficiency of the energy infrastructure and abandon the dependence on oil.”

A more concrete step in the materialization of this cooperation was the agreement signed on September 20 between the Russian group INTER RAO and the Cuban enterprise Energoimport for the technical capital maintenance of the generating units of three thermoelectric power plants on the island. “This Agreement approves the work schedule for the project to recover 10 units of 100 MW at the Ernesto Guevara (east of Havana), Máximo Gómez (west of the capital) and Antonio Maceo (Santiago de Cuba) thermoelectric power plants,” INTER RAO Export said in a statement.

Agriculture on the table

The Cuban agricultural sector and within it the production of food in Cuba is a matter of life or death. The Russians are interested in retaking agricultural cooperation and raising it to the levels achieved during the Soviet era. “I hope we can finally collaborate on the issue of agriculture as actively as we did in the years of the Soviet Union,” said Mashkova.

The Russian leader recalled that in those years the Soviets supplied Cuba with irrigation machinery and all types of harvesters and now Russia “lost a lot of its potential in the production of machinery for agriculture,” but as soon as they have the adequate equipment “we are surely going to help Cuba much more.”

On the Cuban side, efforts are focused on putting on the Russian market the Biorat―biological rodenticide for the control of rodents and pests―which is already registered in the European nation.

Meanwhile, several enterprises in the Cuban agricultural sector took advantage of the first Cuban Exhibition―held in the Russian capital from September 18 to 20―to establish contacts with Russian companies in order to export their merchandise and acquire advanced technologies for production in Cuba.

The Tecnoazúcar enterprise and the Cuba Ron S.A. corporation went to the Cuban fair ready to position themselves in the Russian market. The first offers its well-known Mulata rum, while the other is an invitation to a shot of Cubay.

BioCubaFarma, with innovative medicines, technologies and health equipment that could be in demand in the Russian market, was also present.

Artex, Suchel Camacho, Textil Ducal, the Desoft computer solutions enterprise and a long etc., for a total of 50 Caribbean entities, were present in the cold Russian capital with the aim of opening up to a market with unlimited possibilities.

Undoubtedly, the Russian potential is great and there are many investment and business opportunities in Cuba, beyond the export of oil, locomotives, Ladas and Kamaz. It was already advanced by Russian Deputy Prime Minister Yuri Borisov when he affirmed that by the end of 2019 “we will strive to reach a level of close to 500 million dollars” in the commercial exchange between both countries.

But―and there is always a but―it is necessary to see how much the island’s authorities are willing to accelerate the approval mechanisms and reduce the bureaucratic procedures to give the green light to Russian investment in various branches of the economy, an essential capital injection for the country to make headway.

There is also the issue of payments, because although the Cuban government has stated on several occasions that it will honor the debts incurred, the truth is that it currently owes the Russian side―about 3 billion dollars, according to a report by the RBC financial services company―and does not have the necessary liquidity to pay for what it receives. It cannot be forgotten that beyond friendship, there are the moneys of the companies involved and as the old saying goes, business is business.

Cuba bets on telecommuting in the face of “temporary” energy crisis