Our dependence on oil is structural and has long been one of the major weaknesses of our economy.

There was a time when the inhabitants of the township of San Cristóbal de la Habana recognized the times of bonanza or hardship according to the number of sailboats anchored in the bay. That time, even though the main maritime commercial activities in the country have moved to the port of Mariel, isn’t yet a thing of the past.

Today the times of bonanza or hardship can be somehow diagnosed by the entrance or not of an oil tanker in the bay of Havana or in the bays of Cienfuegos or Matanzas. Thus, our secular dependence on oil once again brings back that same image to us, this time modernized with ships without sails and with much greater bearing. But the ship in the bay is still the icon of our dependence, whether it is carrying cooking oil, chicken, wheat flour or oil.

It would also have to be recognized that all citizens’ access to energy is an element of unquestionable social equity and at the same time it must also be recognized that it was a concern of the country’s leadership since the beginning of the 1959 Cuban Revolution to facilitate that the majority of the population could have access to it, first with the reduction of electricity tariffs and then with the expansion of generation capacities, during the 1970s and 1980s. Today the use of electricity in Cuba is significantly high.

I will advance some ideas on this issue of our energy dependence, now very current because of the “temporary” situation in a contract not met:

1- Our dependence on oil is structural and has long been one of the major weaknesses of our economy since oil became the quintessential fuel worldwide.

2- That weakness was one of the first resources that President Eisenhower’s government wanted to take advantage of since 1959.

3 – Relations with the USSR allowed us to eliminate the threat of the U.S. energy cut, but at the same time consolidated our energy dependence, having as collateral “damage” certain laxity in adopting industrial and price policies in the consumption of oil and its derivatives and in the consumption of electricity, as well as incentives that would contribute to energy efficiency and a culture of saving. Rather there occurred an opposite effect.

4 – There has been a significant asymmetry between the “concern” for our energy dependence and the policies adopted to reduce it.

5 – That asymmetry has also manifested itself in the fact of the reactive nature of many measures, almost always taken to alleviate crises caused by a shortage of oil. That’s what happened during the special period, or during the blackouts in 2004 due to problems in one of the thermoelectric plants of the national energy system and that led us to the Energy Revolution, of which what was most revolutionary was the distributed generation, also based on imported fossil fuel.

6- The governing documents until 2030 include the decision to change the energy matrix and achieve up to 24% of energy from renewable sources, led by the generation from sugar cane and marabú biomass. However, very little or nothing appears on the promotion of the use of renewable energy, especially solar energy for specific applications, such as transportation or water heating, etc. or for the individual consumption of citizens. Let’s say that there is no policy to promote solar energy consumption in Cuban homes and that is also a main source of fossil fuel savings if we take into account the structure of current electricity consumption.

It is very likely that I have skipped some issues of relevance to this issue but it is true that our energy strategy until 2030 centers the effort mainly on the energy generated from the sugarcane and forest biomass, although it also gives a boost to the development of photovoltaic parks but on a much smaller scale. 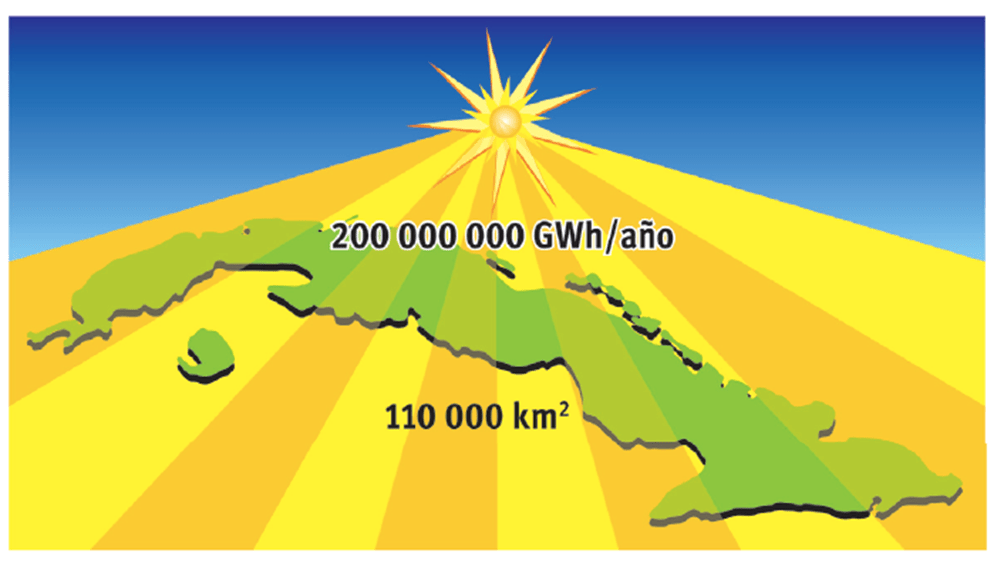 According to the text Energía fotovoltaica para Cuba (Photovoltaic energy for Cuba), published in 2019 by the Cubasolar publishing house, written by Dr. in Sciences and Professor of the University of Havana Daniel Stolik, from where I have taken this graph, the sun’s potential energy in our country is two million GW per year and translates into about 5KWh/m2: much more than any Cuban home’s average consumption.

2- In that same period, the consumption of the residential sector increased by 35.5% KWh.

4- Growth and development efforts and the drive to become a more prosperous country can only be achieved by raising energy consumption in an absolute way, although we can reduce consumption in relation to GDP growth.

5 – It does not seem reasonable to expect a substantial decrease in oil prices, quite the opposite.

6- Nor is a substantial recovery of Venezuela’s oil production expected in the short term.

7- The same can be said about Trump’s policy towards Cuba and Venezuela. Mr. Trump’s possible re-election must also be taken into account.

8- Expecting a decisive increase in the national production of oil and gas in the short and mid-term to substantially cover our current needs does not seem to have a real basis.

However, even so, we still have an almost unlimited resource within a few thousand years, the sun, which without being “the solution” could be that large aspirin that relieves, in part, this headache.

Photovoltaic energy and its applications: “to be or not to be”

It is true that Cuba has a strategy to change the energy matrix where solar energy is the second renewable source we will use, at least until 2030. It is also true that in that strategy, the participation of the generation from homes and institutions is not a priority nor does it appear as decisive, nor the use of its applications.

In Cuba many institutions have long investigated these issues. Knowledge has not been lacking, it is another thing that we have not lacked.

The first silicon solar cell was made in 1975, when the research began on the subject of PV in the UH which lasts until our days. At the end of the 1980s the first PV modules started being made industrially, which subsequently continued in a more established way in what is now the Pinar del Río CCE. In the 1990s, the CIPEL was venturing in getting investors with the electronics of the time. The CIES in Santiago de Cuba was starting to install remote systems. The State Energy Committee made its first promotions of the PV. The CETER was created in the CUJAE and the PV Research Laboratory in the IMRE-UH. The ECOSOL company was developing PV installations in the country and then in other countries. In 1992 the proposal for the PV Program for Cuba was raised. But the energy line in the country continued based on fuels. The GNESFV Group that worked for several years was created. CUBASOLAR was promoting the RES. Other studies were conducted on the need for the PV program in 2005, 2007, 2009, 2012, and the current one updated in December 2012.

Important comprehensive studies on PV energy were carried out and have been published for more than 25 years in the framework of the Faculty of Physics-UH and the IMRE UH.

In Cuba, the issue of photovoltaic energy has had everything, from many institutions investigating the issue, to great detractors of its use, logically to those less experts who think that because we have soooo much sun! and we put up with a hellish heat almost the whole year, well it would be very easy to use the sun to produce energy.

Today it is possible, thanks to the drastic reduction of the costs of solar cells, to the increase in their efficiency, to the increase in the quality and efficiency of the batteries (especially those of lithium ion) and the decreasing reduction of its costs compared to a few years ago, to think about expanding the use of photovoltaic energy and not only base the change of our matrix on the use of the large solar parks that the country’s policy is promoting. 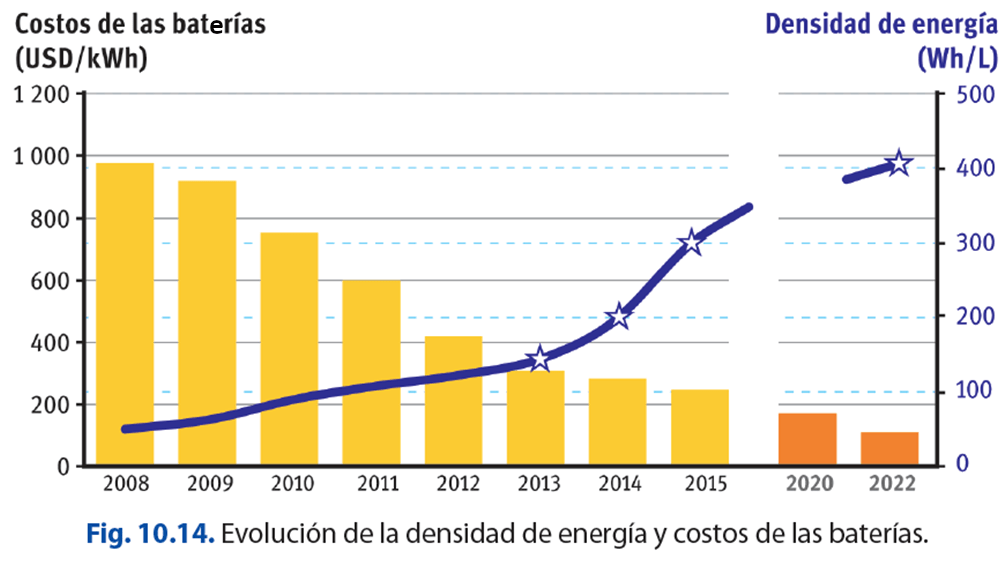 Fig. 10.14. Evolution of the energy density and cost of batteries.

There are applications for the use of photovoltaic energy in practically everything. If we promote the generation in the residential sector, for power generation itself and for water heating and pumping water to the buildings and houses from the cisterns, we could save a lot of fuel, if we do it in the equally important transportation it would represent the saving of diesel and spare parts and maintenance, not to mention if we used it in hotels, for air conditioning systems, water pumping, etc. It is true that everything would require these specifics. But it is also true that that it would be worthwhile.

Luckily, at least today we have a sample of its applications in transportation, especially to replace vehicles that provide decisive services in the welfare of the population, which is the case of the initiative of a joint venture, Aguas de la Habana, which incorporated 22 electric vehicles to its fleet, paying little attention to skeptics and that today we can see circulating in Havana with the consequent fuel savings, as well as spare parts, etc. and that today are the only cars in Cuba that are free of the new situation and that can service the city.

It is true that in the document of the strategic cores there is the change of the energy matrix, but I ask, how many of the current sectors and companies have specifically incorporated their contribution to this purpose using the most abundant resource Cuba has? How many of the current hotels being built have incorporated in their projects the use of photovoltaic energy for specific purposes, or the desalination of seawater to reduce the pumping of fresh water sometimes from hundreds of kilometers away? How many of our companies have thought about radically abandoning cars and some trucks of low internal combustion and changing them for electric ones powered by solar panels?

Is it not consistent with the urgency and strategy to issue new regulations to facilitate for citizens the import of solar panels for generation without grid injection (or with it) and for water heating since the residential sector is the largest consumer?

Why aren’t import tariffs on electric cars and solar panels modified for our companies and institutions?

For now, I will continue reading Stolik’s book because I have the privilege of having a hard copy. I only recommend that it be generalized reading for all those who have to do with this tremendous problem that is energy and we really make up almost all of them.