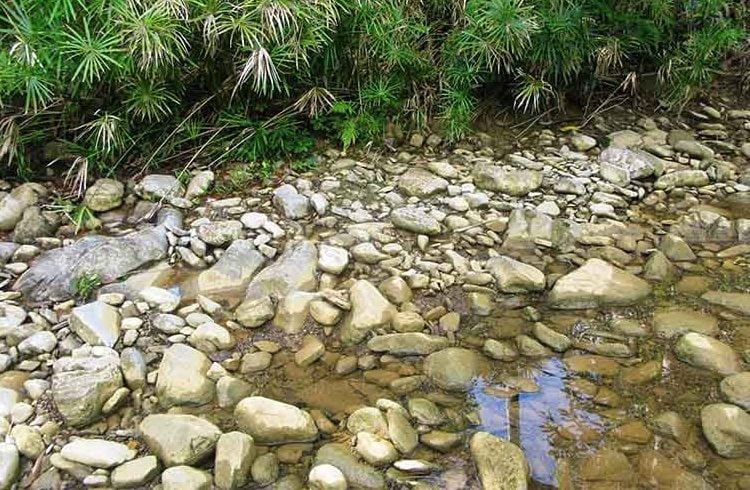 The kingdom of water

The irregular stony ground requires horse and boots. This strange landscape includes monolithic pieces of red basalt on the green carpet that goes from peak to peak; and far away there are also some cliffs made up by erected walls of white limestone.

While climbing the mountains you reach the water kingdom. It emerges from some hidden spring on the heights that are really not that high because they are at just few hours away.

Water, water and more water. It f lows into the kitchens of rustic huts through long hoses that are lost in the bush. If one day it does not reach the hut you may assume that the well is dirty, scrambled . When the water is stirred is not good for anyone. The river is emboldened and closes the paths taking animals and bridges with it like the devil takes the soul.

But even without being widened the riverbed is dangerous, it keeps a perennial mystery.

The courtyard of Duni, at just an hour drive from the house of Quimbo, is near the Puddle of Remolino. There, where there are a creek and river, the men of the area have bet hens, calves and pigs by touching the bottom. No one but the Puddle has won the bet.

But they have the water as a blessing.

For each disease, there is a measure, always designated in “jars”, which heals and brings peace. You just have to rinse the skin with ten jars and fever stops. Thus, there is a quantity for each evil your body can suffer.

It is not on their altars; they know that God is only one. There is a Bible in the house of palm fronds, images of saints. But the liquid is, they swear, the relief means. They do not preach their beliefs or gather in worship; so perhaps only few families include these rites in their beliefs.

In Cuba they are known as “aquatics”.

Most of them are located in the depths of Viñales and San Cristobal . In Machuca, for example, they are known by their surnames: “the Rodriguez”. They are quiet, honest and hard working people generally. So people have them in esteem in the high mountain communities and only few judge their way of life, respect the decisions within families even when these are incomprehensible to us.

Apparently the practice is indigenous to the island. There are not references of human groups doing this. Little is known of that sect, maybe because of its remote location, and also old prejudices.

The theme has its vague and abused reflection in our literature and cinema. The 60s and 70s generated representations in tune with the prejudices of a revolution that saw in all faiths a lag from the past.

It is known the case of filmmaker Arturo Sotto, who thought to penetrate with his team in Viñales and spend the sidelines of his documentary ¨Breton es un bebe¨ to the sect. The response of the provincial authorities was that it was not of interest to visualize that community in a material on Cuba .

Pablo de la Torriente Brau said that going to the East of the island meant to know another country. I think the journalist could include in his inventory to this piece of Cuba. Noble people, who do not reject the stranger, who open their doors to share the deep and blue puddle.

The catibos take advantage of noon and cross over the water, scaring the swimmer. Sony, Duni ’s husband, grown and born there is not surprised by anything. In the end the catibo is small, harmless, although he bristles a bit when talking about snakes.

-May God be praised, says the woman and left on the table the aluminum dishes in which we are going to have lunch.

-One day , when the sun fell, the boy and I came back from hoeing in the taro plantation…

-And we hear the dog barking, interrupts a ten-years, skinny, blond boy with wide eyes. He had been watching us with the half-open mouth. Children look with the impudence of those who want to know.

Duni interrupts the young narrator and puts before us a tantalizing smudged casserole with black beans, but without meat or viands.

-Go to wash your hands and look for your sister, ‘she told the boy, your father ends the story.

The boy went to fulfill the orders. “And why was the dog barking ?”

-It was a majá (Cuban boa), man! -Sony made up the scene so we were stuck squarely in his story. The animal stood up and equaled it in size. –It was at least a three meters long specimen…

Sony nodded against disbelief and amazement shared by his interlocutors.

‘I wanted to catch it, but its head was facing me and that is dangerous. If it takes you it can coil you up and can choke you to death…

-What do you mean by catching it? That’s crazy! -someone noted from the table.

Sony showed his teeth, and we heard an ironic laughter from the kitchen. The two-meter man leaned toward us. He had a cracked face, eyes of fearful ox, powerful voice of thunder. Everything was on the table. The planks creaked slowly.

-If you catch the majá with the left hand, it loses strength, you see?

When someone speaks with such conviction bit more can be investigated. Certainty is the reason, never the reverse.

-And what did you do with the animal?

-The boy tried to hit it with the hoe, and we haven’t seen it until today.

-In Havana there is nothing that looks like this, huh? Duni asked, and put another blackened casserole alongside the beans. –I tell you can not eat this corn back there.

The intense yellow cornmeal seemed a Van Gogh sunflower. Before starting, Sony opened three cans of Spam reaching Machuca as part of the Turquino Plan: a government initiative that takes resources to families in remote sites.

The boy and his sister were approaching in the distance. They were whispering when reaching us. They looked intrigued while we were chewing and praising Duni´s hands in the kitchen and some of us told some jokes once the fierce midday hunger had finished.

Duni takes the dishes to the kitchen. One of my friends follows her. Sony gets up with the promise of bringing us a bunch of the best bananas we have ever tasted in life. He tells us to sit when we talk about helping him. “You are the visit.” After a while my friend comes out the kitchen laughing like crazy. “If you see the mess Duni made when I started wetting the dishes.” “You are the visit, girl!” the woman said on the other side of the wall.

-And do you help at home? ‘I asked the children.

They smile shyly, but talking is not a problem.

‘I help my dad to plant pine trees on the hill, the boy says and points a surrounding hill, full of pine trees reminiscent of the most tender Christmas. When the Forest Company comes to take them down I do not even want to look –he puts his elbow on the table and passes his hand through the curls of his hair.

-And school? Is it far away? -We do not go to school. Mum teaches us to read, the girl noted.

The astonishment was spread from hill to hill. Few seconds of snow, until the little brother broke away our mouths with a longing :

-‘Soon dad will go away, and when him to return from Cuba he will bring me toys.