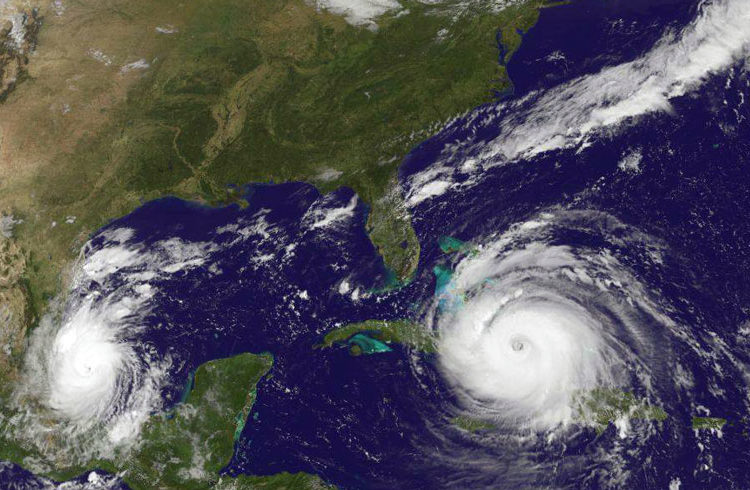 Hurricane Irma is already being felt in Cuba. Eastern Cuba, especially the provinces of Guantánamo and Holguín, are already getting its rain and winds, while sea penetrations are being reported on the northeastern coastline.

According to the U.S. National Hurricane Center (NHC), at 100:00 a.m. of this Friday it was located 435 kilometers from the east of Caibarién, in the northern keys of Villa Clara, and 655 kilometers to the southeast of Miami. It had maximum sustained winds of 240 kilometers per hour and a central pressure of 927 hectopascal, which is why it is now a category 4 hurricane on the scale of 5, although it is still very powerful.

It continues toward the west northwest, but the velocity of its movement has decreased to 22 kilometers per hour. 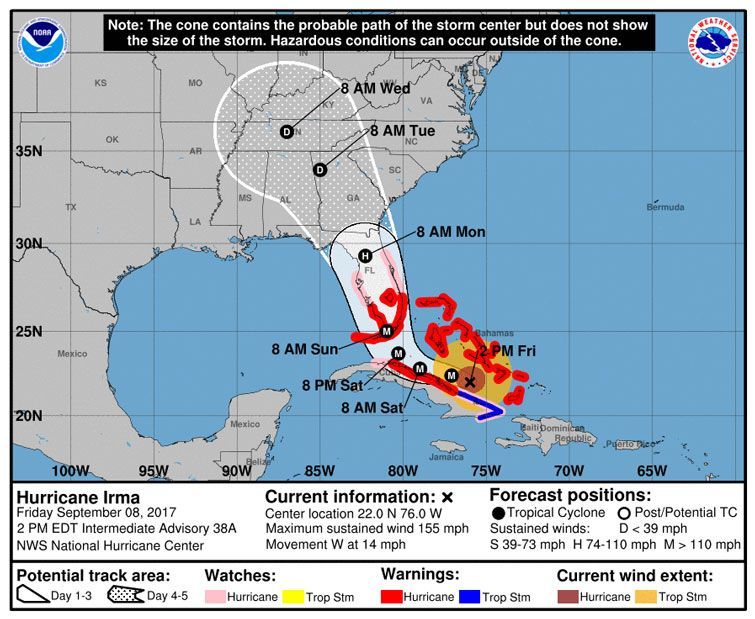 In its most recent report, the Cuban Institute of Meteorology (ISMET) points out that in the next 12 to 24 hours Irma will continue as an intense hurricane moving along the same path and decreasing the velocity of its movement once it travels through the Bahamas, and near the northern coast of the central region of the island in the evening.

According to forecasts, this Friday the eastern region will have heavy showers, strong and locally intense toward the zones of the northern coast and mountainous localities, which by the end of the day will extend to the central region where they can be strong starting the evening.

The winds in the eastern region will be from the northwest to the north at up to 80 kilometers per hour with gusts in areas of the northern coast, and in the center of the country they will be a bit more moderate in the morning.

There will be strong swells of between 5.0 and 8.0 meters with coastal floods on the northeastern coastline during the morning, which will extend to the central region with coastal floods that can be strong starting the end of the late afternoon. The stretch from Cabo Cruz to Punta Maisí, in the eastern southern zone, will have swells of between 2.0-and-3.0-meter-high waves.

The General Staff of Cuba’s Civil Defense decided to establish the Alarm Phase for the provinces of Villa Clara, Sancti Spíritus, Cienfuegos and Matanzas, given the proximity of Hurricane Irma. In addition, the Alert Phase was decreed for Mayabeque, Havana and Artemisa, and the Informative Phase for Pinar del Río.

This Thursday the Alarm Phase had been decreed for all the provinces between Guantánamo, in the eastern tip, and Ciego de Avila, in the center of the island, in addition to the coastal municipality of Caibarién in Villa Clara.

The Civil Defense note specifies that “the special municipality of Isla de la Juventud must remain attentive to the information being issued” and orients the state agencies and institutions to comply with all the measures established for the phases in which their territories are located.

This is how the powerful Hurricane Irma is seen from space, in an image captured by the National Aeronautics and Space Administration (NASA).

Irma is advancing and its effects are being felt over eastern Cuba. The northern coastline of Holguín, which precisely today nine years ago lived the entrance of Hurricane Ike, is suffering sea penetrations, while the precipitations and gusts become more intense. Up until noon, according to the state-run television close to 100 millimeters of rain had fallen in Banes.

Collaborators reported to OnCuba on the phone that there are intense showers in Moa and Banes, while there is rainfall in recesses in Guantánamo, Santiago de Cuba and the Santiago municipality of Songo-La Maya. In several eastern localities the power has been cut given the heavy tropical storm winds and intense gusts.

Rains have also been reported in Camagüey and Las Tunas. In Santa Lucía beach, in Camagüey, the electricity service has already been interrupted.

In Guantánamo as well as in Holguín the authorities have resorted to the caves for the evacuation of some persons. These places have demonstrated their effectiveness in the face of previous meteorological phenomena and now again serve as shelter in the face of the hurricane.

Until now the wind in Santiago is not strong and the city continues functioning according to what was established in the Hurricane Alarm Phase. The rain, initially at intervals, has been increasing to the extent the day advances.

Hurricane Irma seen this Friday morning by a Cuban radar.

News at dawn from the northeast

Different media and persons on the social media are sharing what was happening this morning in Cuba’s northeastern region. Hurricane Irma causes showers and sea penetrations.

It has been raining in Maisí since dawn. The winds are increasing, according to journalist Niolvys Rodríguez. The electric power was interrupted since 2:30 a.m. Friday September 8 as a preventative measure.

Waves of up to 5 meters high in the area of the Baracoa seaside wall and sea penetrations that reach 300 meters stand out, for the time being, as the most significant aspects of Hurricane Irma’s passage through Cuba’s northeastern tip.

The seaside wall dawned with damages in its structure and the sea furiously attacking the homes located nearby. Baracoa’s children’s park was also affected by the sea penetrations, according to reports on the social media.

Up until now there are no river floods, flooded communities or considerable damages to roofs because of the winds. The principal damage is the coastal floods.

As a measure of protection in the municipalities of Maisí, Baracoa, Imías and San Antonio the power was cut, although they have sufficient means for the protection of the population and the economy’s goods, according to the local media.

The Day of Our Lady of Charity

September 8 is the Day of Our Lady of Charity, Cuba’s patron saint. In its Santiago de Cuba Sanctuary and in other parts of the island the date has been celebrated despite Hurricane Irma, even though measures have been taken to minimize its effects and protect the lives of the faithful.

The social media are also recalling that day and the protection of the island’s patron saint is being evoked in the face of the danger the hurricane poses. Cubans are praying for their families in and outside the island, for the protection of Cuba and Florida.

The six dolphins of the Cayo Guillermo Dolphinarium Recreational Center were evacuated to the province of Cienfuegos in the face of the eminent arrival of Hurricane Irma and its passage through the group of keys to the north of Ciego de Avila.

The caretakers sedated the dolphins for their transportation by air to the Cienfuegos dolphinarium of Rancho Luna. Ollanty Quintero, head of the trainers, said to the newspaper Invasor that this is the second time they have been transferred for the same reason.

The entire staff of the dolphinarium took part in the procedure, from the capturing and location of the animals in a proper place to apply water to them, stroke them, maintain the right temperature (27 degrees centigrade) and attenuate the stress, until they were taken on stretchers to the interior of the helicopter.