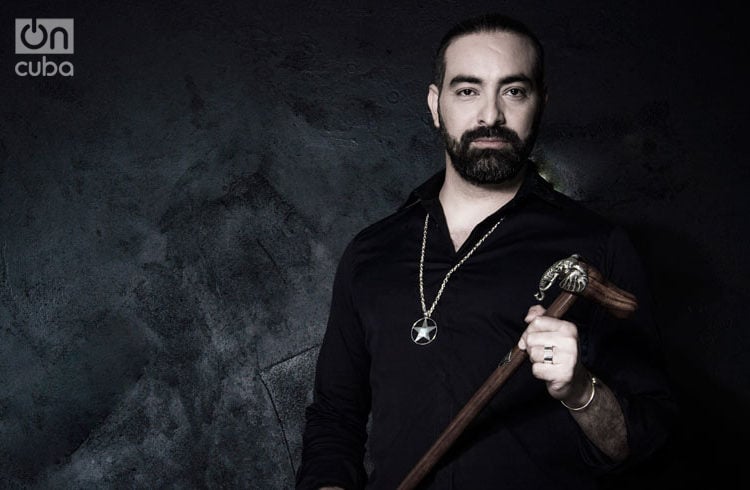 Twenty years of living and working in Spain with many of the world’s great musicians weren’t able to modify the accent, or make Alain Pérez lose his simplicity and Cubanness. His essence has remained intact to return and share with the public he loves the most: the Cuban.

Alain, who has a vigorous style, rhythmic and full of symbols and allegories, defines himself as a contemporary Cuban popular musician and, in addition to the multiple instruments he dominates, singing is his greatest passion.

He soon learned to not cling to an instrument or a single interpretative line. The double bass, the guitar and percussion are the ingredients that, together with “coconut water” and his voice, have made his melodies an explosive mixture of sounds in which he merges the rumba, Cuban salsa, bolero, jazz, trova, flamenco, samba, guaracha, son, and the punto guajiro.

Alain is heir to the azuca and tumbao of Celia Cruz – with whom he worked for many years -, and the cadence of Paco de Lucía – whom he accompanied with his double bass throughout many countries. The also arranger, orchestrator and musical producer has played together with several greats like Joan Manuel Serrat, Ana Belén, Estrella Morente, Tomatito, El Cigala, Winston Marsalis, Gonzalo Rubalcaba, among others. And now he has returned to his land, presenting ADN, his most recent record production, with which, he comments, he has come to stay.

Everything started in his native Manaca Iznaga, close to Sancti Spíritus province’s Trinidad, “where the guaracha, the son and the punto guajiro trapped me. I come from a humble, partying and very joyful family, and I came into contact with music from the cradle. The first artist I discovered was my father Gradelio Pérez. Through him I found out about the emotion of the art, he is a natural artist, empirical and also writes the lyrics of all my songs.”

“I learned the punto guajiro and the guaracha when I was seven. I unconsciously decided to have a musical bent. I let myself be seduced without knowing it was something that was going to affect me for life. When I was nine years old I arrived in Cienfuegos to form part of the Cielito Lindo group, with which I had my first stage experience. Later in the Manuel Saumell conservatory to study classical guitar. I started singing and playing the guitar. My first goal was to get to the National Art School. Already there, when I was 17, in the second course, Chucho Valdéz called me to work with Irakere as keyboard player and vocalist. Of course, that was a great honor for any musician, more so for me, being so young. It was very emotive and a big impact, a sort of confirmation because I came from below, from the countryside and had gone through many hardships. The music moved me, that’s where I had my first international experiences and a great many satisfactions. Sometime later Issac Delgado called me to play the double bass in his group. Later I continued my career abroad. In school I graduated as a guitar player, but later I became the bass player and producer that accompanied great musicians.”

You spent many years working outside of Cuba, why did you decide to return now?

Twenty years in Spain and from there to the world…. I played for a long time with Paco de Lucía, and when he passed away I decided to return to Cuba. I’m here with my fifth solo production, wanting to do a lot.  In the previous productions I didn’t have the dedication and time that it required because working with Paco took up a lot of my time. I’m returning to my set idea, to my personal project that always remained in the background. I decided to return to defend Cuban music, my dad’s lyrics, the popular dance music, always respecting the genres, the roots, the traditions.

How much is there of all those great artists in what you are today?

I always say that, in addition to the great musical experience they provided me with, they gave me their great energy, experiences, language, concepts and they taught me respect for music. All these maestros had in common humility, coming from the heart, really authentic without believing they were extraordinary despite their great talent and fame. They would go through life with their feet planted on the ground, and that’s something I will always admire about them and, at the same time, something that rather shocks me in the new generations, who have practically done nothing and go around with poses that I never saw in these immense beings.

How do you assume your versatility to express yourself in several instruments?

It’s a process of growth, of natural development that happened with the years. As you know I started off with the guitar and studying complementary piano, although percussion is the instrument that sums up the rhythmic feeling of all our music. It always attracted me a great deal, I like it more than the double bass and everything else. Percussion is a spiritual liberation, it cleanses and purifies me.

In what stage of your career are you right now?

Right now what most fills me is what I first did as a child: sing. It’s like returning to my home’s backyard, the same one that invited me to a party. I’m setting out on my trip to my roots, returning to my genesis. I’m at a moment of happiness, satisfaction and am seeking the way to consolidate myself to share my work. I’m not afraid of the new tendencies, nor do I close my mind to experiencing them, if someone is going to do it that they do it from their heart and I invite them to collaborate with me.

ADN is your fifth record, what differentiates it from the previous ones?

In addition to being the title of a song in the record, it is a rather delightful theme, it collects a bit the feeling of from where I come, my blood, my foundation…. We recorded the theme in the root of the essence. There are themes with Rubén Blades and Omara Portuondo. Always with the sound of salsa like in my previous records and fusion, although these melodies’ temperature is much higher, effusive, Cuban, full of joy and current. This is a production that is born here, from the people in the street, from their views and their tastes. This time I bring the flamenco to my land with its melodic language so that it coexists in a natural way with other compositions.

What influences do you recognize in your music?

They say I am a mixture of Benny and Arsenio Rodríguez, among other greats. My music has defined aspects of Pérez Prado, Irakere, Van Van and the aesthetics of the traditional countryside, Brazilian and Spanish music.

What inspires you the most?

The Cuban rhythm and folklore, the Yoruba and also the flamenco. Everything that comes from the heart inspires me. I want to live off of emotion, of things that shake me up, that move me.

“There’s always an AU,” is a phrase you constantly say. What does it mean?

It means there’s an option, a feeling, a door. It can be a negative or positive expression, it depends on the context. Tata Güines used to say that phrase and one day I started using it, I pick up those phrases from my seniors.

Did you come to stay?

If everything continues with that rhythm and that energy, I’ll stay here, I never liked the idea of dying in Europe, far from my land.