Despite the low maternal and infant mortality rates in Cuba, the debate on obstetric violence is necessary on the island.

alinaherrera
in Cuba, Health in Cuba
0 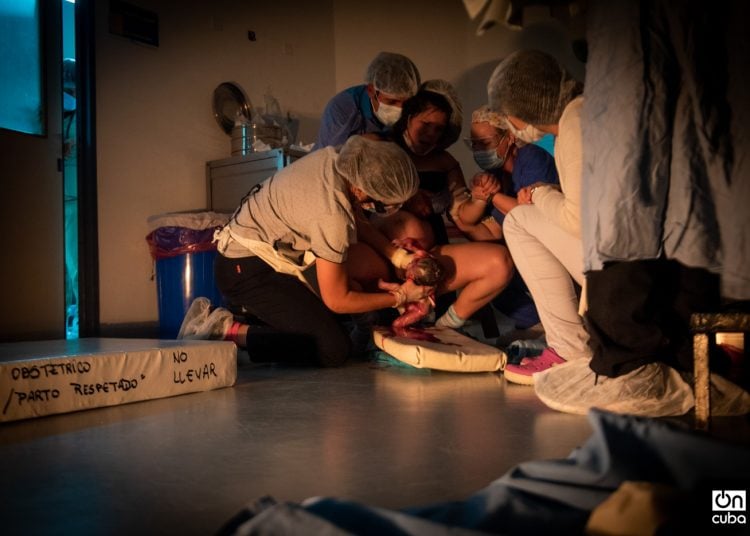 Photo that is part of a feature by Kaloian Santos to the San Roque Hospital in Argentina, where Dr. Melina Alzogaray advocates respectful childbirth, a humanized act where the professional accompanies the pregnant woman and explains the whole process, respects her wishes, physiological rights and times throughout labor, delivery and postpartum. In Argentina there is one birth per minute and in eighty percent of these cases the mother and/or her baby are victims of some form of obstetric violence.

She knew that Fragmentos de una mujer (Fragments of a Woman) would be a hard, painful, breaking film. The main character, Martha, was pregnant and from the first scenes, it could be predicted that the traumatic event would be precisely her delivery. Moments after being born, the baby girl Martha gave birth to dies.

The narration of the story that follows the tragedy runs tense by two recurring elements: first, the delivery had taken place in the house of the protagonist and, second, it had been assisted by a midwife. These circumstances emerge in the plot and blame Martha for the loss of the baby girl: her decision to give birth outside of a health institution, guided by a non-qualified professional, referred to her as guilty of her own misfortune. The narrative seemed to suggest that negligent risk and the baby’s death might have been avoided in other circumstances.

At this point, the medical institution appears in the plot as an irrefutable savior. In fact, the midwife herself, realizing that things were not going well in the delivery, suggests that the parents call an emergency center. Hospitals certainly have the necessary equipment and infrastructure, in most cases, to save lives that in other circumstances would be considered lost, but they are not infallible to error and negligence. They are also not shielded from neonatal deaths.

I gave birth in a public health institution, in a well-known Havana maternity hospital. Since I was admitted I was practically abandoned in a room that was not even for women in labor; but for pregnant women with diabetes, hypertension, and other conditions. Since it was night and everyone was sleeping, I had to keep quiet.

In a small cubicle with bloody cottons on the floor and a broken window, without explanation or prior notice and using a single interchangeable glove, two doctors (including a resident) used my body and my cervix as material for the resident to learn to perform the Hamilton maneuver,1 a procedure known as breaking the mucous plug: mine.

The manipulation was dehumanizing: they picked me up, pushed me, talked to each other as if I didn’t exist, insisted on my vagina until, abruptly, something snapped. It hurt like I imagine rape can hurt. Mysteriously, something broke forever. Faced with this physical and emotional fracture, I reacted without a word of complaint, grabbing the hand of a nurse who responded with a sharp blow to mine, accompanied by a warning and a disciplining look: “behave yourself!”

As in the movie, my baby’s heart rate also dropped a bit at the peak of delivery and, although the birth was imminent and at that point, there was already fetal distress, another resident told me to close my legs because the doctor was not available for the deliver. Sure enough, my son came into the world by a nurse.

In Cuba, only institutionalized childbirth is allowed and there are also hospital protocols for the care of puerperal women who have given birth outside the hospital.

It was not always like this. Neither did births occur entirely in hospitals, nor were those who supported labor and brought children into the world exclusively health professionals. In 1828 the first academy for midwives was inaugurated at the San Francisco de Paula Hospital. More than a century later, at the end of the 1940s, a small room with four beds was founded, destined to become a maternity home in the current América Arias Hospital. In 1959, infant mortality was 70 per 1,000 live births, and at that point, the deliveries were still carried out by midwives.

With the expansion of the revolutionary project related to health care for vulnerable groups, infant and maternal mortality rates dropped dramatically in Cuba. At the height of 1973, hospital deliveries came to represent 98% of the total and in 2012 99.9%. Some of the reasons why this coverage was achieved were the incorporation of traditional midwives into the National Health System since 1960, the creation of the Health Career in 1959, and the systematic construction of maternity homes and hospital units.

According to the 2019 Health Statistical Yearbook, the infant mortality rate was five per 1,000 live births in Cuba, although slightly higher compared to recent years (four per 1,000 live births), it is still an impressive result of the system of Cuban health, no doubt about it. And that, despite the fact that the number of maternity homes and maternal and child hospitals decreased considerably to less than half since 2010.2

However, many pregnant women are mistreated and dehumanized during childbirth in Cuba. There are several testimonies that indicate this, and the results have not always been safe for newborns. For those of us who give birth, the experience of a delivery full of violent technicalities and objectification always has consequences. The physical and natural pains caused by bringing a human being into the world can be forgotten (in fact, they are forgotten), but the emotional and physical pains inflicted by those who supposed to be the most important persons for you at that moment and in whom you trust because they are “qualified” for it, are indelible.

The film Fragmentos de una mujer is presented as a rare paradox for Cuban reality. While in the feature film we see Martha choose a humanized home birth, where good treatment and consideration are appreciated, her daughter dies. In Cuba, a country with one of the lowest mortality rates in the region, where traditional midwifery is rare and childbirth is institutionalized, obstetric violence is not yet recognized and tends to be naturalized by health professionals, by patients and companions.

However, having a hospital and humanized delivery are not mutually exclusive. That is why obstetric violence should be considered as an urgent issue to be resolved, for which the recognition and discussion of legal solutions can be cornerstones.

Since 2014 the World Health Organization (WHO) has valued as “alarming” the increasing number of investigations that reveal the “disrespectful, offensive or negligent treatment during childbirth [mainly] in health centers” received by women and pregnant people. In the same declaration, governments were urged to carry out more research to help measure the systematicity and impact of this scourge; and also to initiate and support campaigns to improve the quality of maternal care with special emphasis on respectful treatment, considering it a central component. Likewise, the report specifies the need to enhance the rights of pregnant women, expand professional responsibility systems and their training in order to eradicate offensive practices, mistreatment and lack of respect.

The United Nations (UN), for its part, considered obstetric violence for the first time as a violation of human rights in 2019, in particular against the rights to reproductive health and during childbirth care, defined as a manifestation of gender-based violence. In addition to revealing the generalized and global nature of this type of violence, rooted in health systems, the report lists some manifestations such as symphysiotomy, forced sterilization, forced abortion, excessive use of cesarean section (not common in Cuba), and also excessive or routine use of episiotomy or deep cut in the perineum that reaches the pelvic floor muscle, use of inexperienced medical personnel to perform examinations, excessive use of synthetic oxytocin, the so-called “husband’s stitches” In the suture of the episiotomy, humiliations, physical and verbal aggression, such as threats, teasing, reproaches, insults, sexist comments, blaming messages, as well as lewd looks and manifestations of disrespect.

In addition, a transcendental element to differentiate a necessary procedure from a violent practice prevails in the discussion about obstetric violence, and that is informed consent. It is no secret that episiotomies, administration of serum to accelerate delivery, rupturing of membranes, the Hamilton maneuver, the participation and intervention of inexperienced residents and students, the immediate detachment of the newborn from the mother after delivery, the Killester maneuver, the use of forceps and suturing without anesthesia are practiced in Cuban hospitals routinely and without the proper information and request for consent from the patient. Nor is it a secret that harsh treatment of women in labor prevails so that they “collaborate” and “behave well.”

Informed consent acquires international legal relevance through the 1947 Nüremberg Code, a prelude to bioethics in generalized medical practice. The autonomy of the patient and his right to informed consent implies, in turn, the obligation of the health professional to act with benevolence and not maleficence. That is, the right of the patient to be informed and that her consent be requested, is considered a constitutive part of the medical practice, and their omission translates into negligence. Failure to comply with the foregoing allows us to infer that the health professional did not act in the benefit of the patient, potentially causing moral, physical and property damage. This approach imbues the medical profession not only with skills and technical knowledge for the health-disease binomial but also with the obligation of bioethical treatment.

1 The Hamilton maneuver consists of introducing one or two fingers into the cervix and once inside it, turning it 360 degrees in order to detach the membranes of the amniotic sac from the base of the uterus. In this way, labor is induced or the release of prostaglandins is caused, which helps to generate contractions and accelerate labor. Its risks are accidental rupture of the amniotic sac, infection, and bleeding. It produces pain or discomfort during the examination and can produce accelerated contractions, for which the review and subsequent monitoring is essential, as well as the informed consent of the woman in labor to proceed with the maneuver.