Everything started in a garbage dump 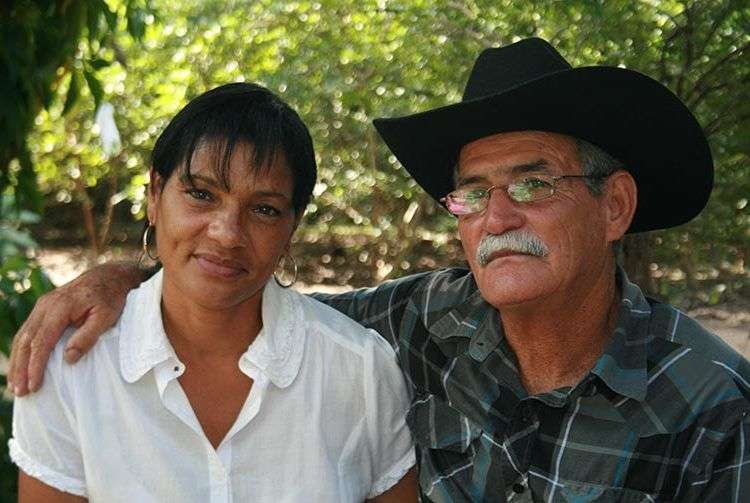 At 30 feet deep Ortelio was lost of Yami´s sight. He went down at 9 am and went up at 3 in the afternoon. With a pick on his hand he dug a well to cope with drought. Yami from above thought he would die in the deep dark hole.

Nine years before this event, which occurred in 2004, Ortelio Aguila Alfero and Yamilia Maria Favia had met each other. He fell in love with the young mulatto girl. She took her three children and went to live in his house. The board house was on the borders of a slum and a garbage dump in Camagüey.

They left their jobs in offices and transport procedures where they worked together to devote themselves to life in the countryside. They rescued a piece of land in the dump, managed to get some bean pods and planted them in nine furrows. The first fruits germinated from these seeds. Then they threw themselves into the conquest of garbage and neglect.

One day , tired of the grass to reach their knees, they decided to make a road. Everything around them was stones and marabou. They worked so hard until the evening. They had no holidays.

They took advantage from everything imaginable of that place dubbed as the “dump” by the recently concluded Brazilian soap opera ¨Avenida Brasil.¨

Yami collected yogurt bags, filled them with land and cultivated ornamental plants. In the nylon bags she also planted fruit trees to make nurseries. She liked to decorate the place. So when she saw a plant she liked it, she asked for it or secretly took it.

They took dirty bottles, washed and recycled them to use as containers for tomato puree. They drained the pulp with a bicycle wheel rescued from the rubble, to which they added a net.

They wore thongs that others threw away. When their b oots get broken they used a hot machete for pasting them. She will never forget when her daughter Yirka, in the Special Period, had no shoes to go to primary school. The girl wanted a pair of snickers and Ortelio told her she had to earn them.

Yirka began planting lettuce in a flowerbed. Then her classmates started calling her lettuce girl. Thus she earned money and she not only bought a pair of shoes by 9 Cuban pesos, but it was enough to buy a wiping cloth to clean the floor.

In 1997 they inaugurated the January 1st Credit and Services Cooperative with minimal resources and without earning a penny. And again the dump helped them. All the initial documentation was made from the paper they extracted from there.

Ortelio at that time was president, buyer, administrator, guardian and Yami played several other positions because they could not pay anyone.

Over time they gained profits and saved the money in the bank. Thus, little by little, they were increased their capital to invest and strengthen the business.

Currently they produce tons of food for the population, tons of honey for export annually and have several containers of coal.

Their earnings are between 20 – 40 000 pesos in a current account, with which they pay a decent wage to farmers who work for them.

However, to achieve what they have today the road was not easy. “I was said I was crazy, people made fun of us. Credits, authorizations and paperwork were endless. But we never gave up. ”

Rot already died. They dismounted with their hands a large deposit of waste. The marabou and wastes do not hold them back already. Now Ortelio and Yami harvest their sown land. And they do not forget that everything was born from a garbage dump and some bean seeds.

Cuban doctor recovered from Ebola is already in Cuba

Sergio Cabrera, again in the fiction jury of the New Latin American Film Festival in Havana

Gutiérrez Aragón, the filmmaker who left a rose from France in Havana