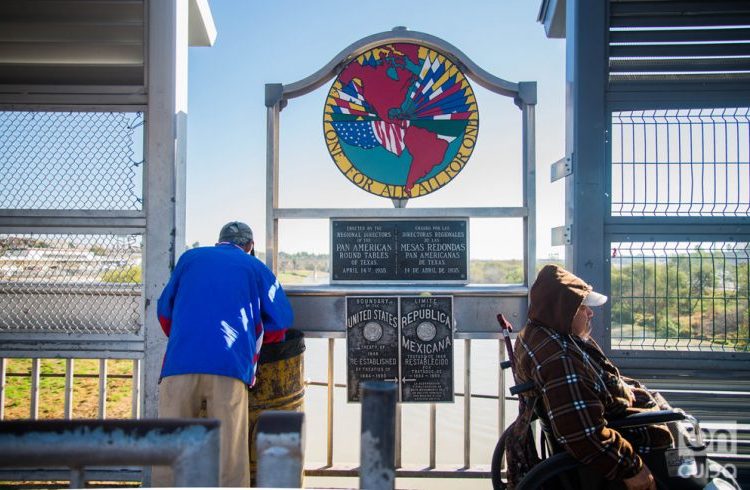 The imaginary dividing line between the United States and Latin America. The first thing you see on the north side is someone looking through the garbage. On the south side, a beggar. Photo: Irina Dambrauskas.

There are already more than 500 Cubans stranded in the city of Nuevo Laredo, the border between Mexico and the United States. Every minute that goes by the uncertainty increases their anxiety. OnCuba has sent correspondents to the place and is permanently in contact with several of the Cubans concentrated there.

We have put together 9 last minute items to understand the situation of these hundreds of persons who have left Cuba with the dry foot, wet foot policy in force but who on their way found out it was annulled – the majority illegally crossed borders to reach the United States:

OnCuba had already advanced that among the stranded there was a women who was 7½ months pregnant. As a result of the stress and the conditions in which she was living the pregnancy, she gave birth before she was due. Both of the baby’s parents have asked for anonymity on behalf of the family.

When the contractions started she was on the corner of the Gateway of the Americas (that’s the routine of the Cubans on the border). She went into labor right there; there was no time to reach the hospital: she gave birth in a church located 200 meters from the bridge. After giving birth she was taken to a nearby hospital where she and the baby’s state of health were checked. The results were favorable. The newborn’s parents refused to have her registered as Mexican, they fear that can affect the increasingly faraway possibility of benefitting because they come from Cuba. They demand that their daughter be registered in Texas.

When the routine was sitting down to wait on the corner, the idea came up of another way of waiting. There are at least a dozen Cubans who have trades like carpenter, electrician, plumber and mason who, without abandoning the principal goal of crossing to the United States, are accepting some temporary job offers that come their way.

They are hired for short-term jobs and not for long ones, which facilitates the activity without the corresponding migratory authorization.

A young couple, together with their six-month-old daughter, decided to try their luck. They crossed International Bridge No. 1 with the hope of an exception. They requested political and humanitarian asylum.

“We have left Cuba for political reasons, if we return our lives are at risk and here in Nuevo Laredo we have humanitarian problems, you can’t have such a small baby here.”

When they got to the immigration post a U.S. officer denied them entry and took them to an office where another officer said to them: “You are immigrants, not refugees, so go back to Mexico or we will initiate the deportation procedures, which would imply that we send your daughter to a special center for immigrant children.”

Some five Cubans who were sleeping on the floor of the AMAR Shelter decided to spend a few days in a hotel close to the border. Yesterday evening, according to what they said, some armed men had tried to mug and kidnap them in the lobby of the small hotel.

According to their story, they were able to escape from the room and call Pastor Aaron of the AMAR Shelter, who went to pick them up. Since their safe-conducts to remain in Mexico expired on February 3, they preferred to not call the police or to give their names. But the event transcended and the local police decided to reinforce the Cuban group’s safety without asking them for documentation.

Starting then, the Cubans have decided to not disperse, to stay together and indeed avoid from now on staying overnight in hotels.

The kidnappings of immigrants are frequent in Nuevo Laredo. The local press links them to “the hawks of Los Zetas” (the Mexican transnational mafia that operates in the zone).

5- The resources are running out, the aid decreases

If the journey through 12 countries had already left them bankrupt, their stay in Mexico is costing the Cubans the last cent they had left.

If they have been able to resolve the food with the aid of those who are in the United States and the solidarity of the Nuevo Laredo Mexicans, time is going by and the aid is starting to dwindle.

Many are starting to get tired of the conditions of staying overnight in the AMAR Shelter, plus the fact that they spend 12 hours outside, prowling through the streets adjacent to the bridge. The resources have started running out and the exhaustion increasingly weights them down.

Very few Cubans have “safe-conducts” that haven’t expired. It’s a temporary visa they received in Tapachula, on the border between Mexico and Guatemala. That implies that if the Mexican government were to decide on deporting them, the Cubans could not present any legal document to avoid it.

That is why they have made contact, among all of them, with lawyers specializing in immigration issues who live on both sides of the border – United States and Mexico – to get advice on the existing possibilities to extend the visa a while longer.

The advice they have received from the lawyers is that of doing the paperwork for residence in Mexico, but for that they need a job and housing. Regarding their entry into the United States, the answer they have gotten is conclusive: the only person who can do something about that is Donald Trump.

They have also met with authorities from the State of Tamaulipas, they were visited by the heads of health issues and migratory affairs but this has not provided them any novelties.

A rumor circulated among the stranded: a commission from a UN agency would be going to Nuevo Laredo to confirm the situation of the Cubans and to intervene in the paperwork to enter the United States. According to what OnCuba has been able to find out, for the time being that report is nothing more than an unfounded rumor.

7- A petition to Miami congresspersons

Relatives of the stranded in Laredo who live in the city of Miami, Florida, have sent a petition to Senator Marcos Rubio with the data of those who are on the border. From Rubio’s office they were informed that they cannot do much but that they will forward the petition.

Marcos Rubio, the son of Cubans, was on the short list for candidate to the presidency for the Republican Party last year and had shown signs of agreement with the annulment of the Adjustment Act. During the campaign he said that when you have persons who arrive in the United States and on the following day after they have spent a year and one day there they travel to Cuba 15 times a year, 12 times, 10 times, 8 times, it doesn’t seem like they are fleeing from oppression.

8- Hunger strike and deportation in Panama

A group of Cubans were left stranded in the Darien, the jungle that separates Panama from Colombia, specifically in the locality of Baja Blanca.

Thirteen of them began a hunger strike as a strategy to avoid being deported. But Panamanian military picked them up and left them in the early morning hours of January 30 in Colombian territory. In one of the border localities, Sapzurro, there are now 148 Cubans deported by the Panamanian National Border Service.

“Some 20 of us traveled on Monday to Miami from Bogotá, we had all submitted our application for a visa before the program was no longer valid on January 12,” Maikel Palacio, the group’s spokesperson, said to Univisión.

They are delayed cases of the Cuban Medical Professional Parole (CMPP) program, who had made their application before January 12.