On the (other) day that the sea came in 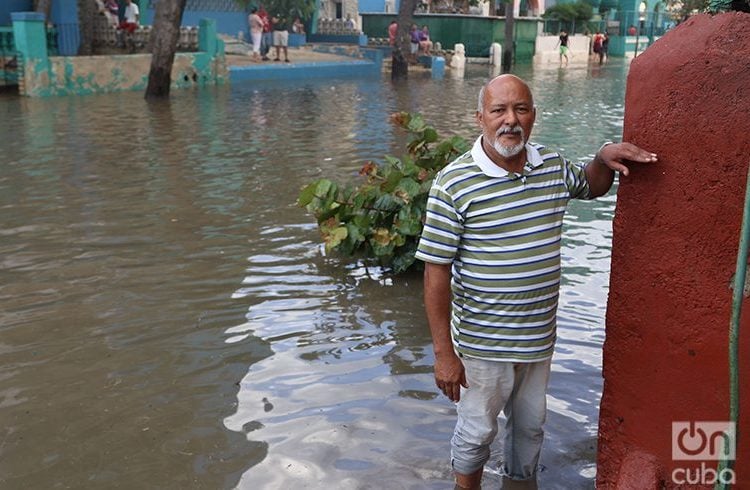 This Monday January 23, as happened a year ago, there was an encroachment of sea in the low zone of Havana. Slight and moderate floods had been announced.

“That’s exactly what they said,” complains Alina when confirming the destruction the water caused in the crafts fair where she works, on 1ra and B, facing the sea.

Yuri, another artisan, lost some 150 of 200 pairs of shoes, “others were left without any.” He kept them in a small container that the force of the waves dragged for more than 20 meters.

“We had placed them at the height in which we thought they would be safe. It’s been a long time since there had been such a big flood,” he said.

When encroachments are forecast in the low zone of the city, the artisans place their merchandise on high places, while the neighbors do the same with their refrigerators, mattresses, furniture and, when they have to, they themselves climb up to a level where they presume the powerful tide won’t reach them.

Yanelis also placed her furniture and refrigerator on top of the kitchen counter expecting it to withstand. She held in her arms her 3-year-old son during all the time water was coming in, for many hours. That morning they still didn’t have gas. They used the electric cooker. “We’re going to cook everything there, the rice and the eggs.”

Antonio Romero has been living here for 22 years. This time he lost nothing with the flood, but he not always has been that fortunate: “I have spent three days with four nights at that door with water up to my neck. Two refrigerators have fallen from where I have placed them, on top of the counter. They were sailing inside the house,” he recalls.

“That time I lost many things. My mattresses, the fans were also lost. That’s it. It took me years to recover. One of these small floods of one day, two days, three days…takes four or five years to more or less recover. More or less,” he insists.

The neighbors have gotten used to living with the possibility that the sea reaches them. Some of them are considering selling or swapping their homes. “But one has to wait for people to forget this,” says Elisa laughing. They aren’t the only ones that incorporate the latent danger to their daily life. Here’s another testimony in Centro Habana, from April 2015:

When Juan José Hernández saw the water coming, he only managed to enter his home and run out carrying his dog. “The water entered fast. I ran, closed the door and went to a neighbor’s home wearing exactly what I had on,” he says pulling at an overall that makes him blend in with the electricians and other brigades prowling the place.

His home, which apparently was a basement at one point or the building’s garage, is still flooded to the ceiling with saltwater. “Today I’ll sleep again at my neighbor’s.” Who knows where tomorrow.

More than 400 meters from the Malecón wall to the city were covered in water. Along that stretch almost all the basements were flooded by the morning.

The flood did not cause human losses, but it did cause material damages that still haven’t been counted. The damages include cars pushed and overturned by the current. More than a dozen cars – almost all from state enterprises – in the parking lot of 1ra between A and B were dragged, some to the middle of the street.

In the primetime newscast of 8 p.m. the government authorities and the Communist Party in Havana had assured that “the population has been opportunely warned” and they announced the evacuation of some 40 families. “The floods have been stronger than expected,” they recognized.

On Monday night the Red Cross, the Firefighters and the Civil Defense helped persons who had been trapped.

The sanitation works in the affected areas and the reestablishment of basic services started this Tuesday.

Luisa María Alvarez, coordinator of Havana’s Basic Cleaning Up Operations, is monitoring the work of a brigade in the zone. “We are in charge of clearing the networks, be it the cleaning of cisterns, of the entire interior network of the homes of each one of the persons who have been affected by the encroachment of the sea. We are working with trucks from different municipalities. All the city trucks are working on the damages along the entire coast.”

Just in one block there were nine contaminated cisterns.

According to the Cuban Institute of Meteorology these floods were caused by “an extensive extra tropical low over South Carolina, the United States,” which covers with its wide circulation the entire Cuban territory and imposes swells in western Cuba and strong winds from the northwestern region of between 25 and 40 kilometers per hour, with gusts of over 60 kilometers per hour.

This situation started to gradually decline starting this Tuesday morning, when the winds turned to the north and decreased their intensity.

It is expected that the swells will turn into waves on Tuesday afternoon.

“Cold front No. 6 is already over the province of Camagüey advancing toward the east. Behind the front the northwestern winds are causing wave sequences on the northern coast and they are the ones that are causing the coastal floods. To the extent that the system advances toward the east they will start decreasing little by little, especially starting this Tuesday morning,” said Dr. José Rubiera on Monday night.

According to Jayr Morales, first secretary of the Communist Party in Plaza de la Revolución, the registered levels of encroachment were higher with respect to January last year. Since 2004 the sea has not reached the places where it reached this Monday.