byDavid Corcho
in Politics in Cuba
0 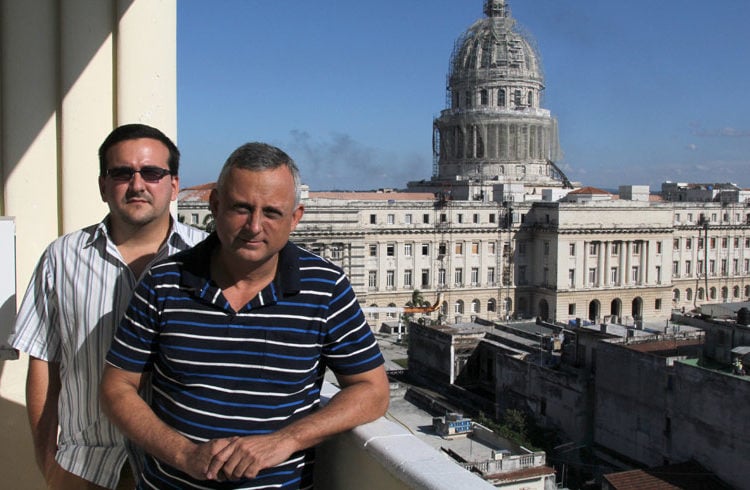 Roberto Veiga and Lenier Gonzalez, former editors of the Lay Space magazine, presented a new project. This odd duo -a 50 years old man with a law degree and a 30- something social communicator, always with some travel schedule or any conference or certain meeting not to drop the flag of political activism, has managed to launch Cuba Posible, a more ambitious project than Lay Space, they say. Both are very satisfied with this endeavor, “a web page, a laboratory of ideas, a quarterly publication and a broad presence in social networks”, promises this publication, thanks to the perseverance of its two organizers and funding from the Kingdom of Norway.

Just days before leaving for the University of Pittsburgh, OnCuba visited the headquarters of Cuba Posible, on a ninth floor in the corner of Amistad and San José streets in the municipality of Centro Habana. Veiga and Gonzalez commented on what their occupation has been for a while now: how to rethink the Island, how to build a more dignified country.

Roberto Veiga (RV) and Lenier Gonzalez (LG) are known in Cuban and international level for coordinating public for nearly a decade the Lay Space magazine. Today you no longer belong to the magazine and now appear as drivers of a new project which is called Cuba Posible. Why the change?

LG: Lay Space magazine was a social media initiative driven by a small group of lay Catholics: Habey Echavarria, Alexis Pestano, Jorge Domingo, Roberto Veiga and Lenier Gonzalez. Although we had different political ad intra criteria, we joined a reading of national life from the spiritual and intellectual coordinates of Catholicism, and a strong concern for the present and the future of Cuba.

We received the magazine from Cardinal Jaime Ortega in 2005, with the aim of making it “the 30 Cuban Giorni” referring to the prestigious Catholic magazine directed by Giulio Andreotti, Italian and intellectual linked to ex-president of the Christian Democrats there. Since then we struggle if the magazine should be a publication only “for Catholics” and from it build a “Catholic reading of reality” or, instead, open to different schools of thought present in the transnational Cuban society and build a sui generis catholicity from Lay Space: closer to the Truth from the joint participation in diversity.

RV: For us, that the Lay Space magazine became a plural forum was imperative. We felt that some of the great historical sins of Cubans have been mistrust, political visceral, the un-legitimization of the different opinions and the determination to impose a project of a single country, regardless of the other proposals that exist. We were and continue to be convinced that the great change now the nation claim implies the opposite; that is, the ability for all projects to share the country and build it together.

LG: The political climate was ripe. The year 2006 marked an important turning point in the island. The rise of President Raul Castro and his call for “structural changes” enabled a powerful movement of ideas on national destinations. We were impressed by the plurality reached by Cuban society, and lack of space for these actors could express. As a group of Catholics we were wondering how we could do to make all this plurality into a harmonious relationship. Lay Space was, in no small measure, our response, imperfect, to that challenge.

RV: However, not surprisingly, we received disapproval and criticism of the most radical of all political and ideological signs. Also within the Church. There were intensifying tensions arose and came to stop us from performing our responsibilities. I should note that I am calm because I knew when to give understanding and to avoid misunderstandings and imbalances within the church community. Also, I have satisfaction that I don’t harbor resentment towards those who saw what we were doing wrong, not to those who passed the threshold of difference of opinions to attack me and to my family.

What reasons motivated Roberto Veiga and Lenier Gonzalez to found this new project?

RV: When renunciation to Lay Space became public knowledge, we received messages from many people and Cuban and foreign institutions, on the island and in many parts of the world. This impressed us tremendously, as was enormous affection and recognition, solidarity and support, they showed us. The general insisted we could not leave work for the purposes we defended and we could count on their cooperation for that. And so these friends encouraged us to continue.

Soon we were able to publish a note announcing that we were working on a new project and communicating, too, its objectives, principles and methodologies. So, since September 8 this year, when we celebrated the Day of Our Lady of Charity, patroness of Cuba, with another note we announced the start of work of Cuba Posible.

The support of many people and institutions made possible, in turn, last October 10th, an important date in our history (to exactly four months after our exit from Lay Space), we publicly opened the new task with a two-day event entitled Cuba: sovereignty and future. In the same intellectuals, thinkers and social activists from different parts of the country, of different ages, different genders, different races, etc. participated. The discussions were free and responsible, strong, dynamic, serious and committed.

What institution does Cuba Posible subscribe to, who run it?

RV: The funds come from the Department of Development and Environment, University of Oslo, a public institution from Norway; although some others have already offered to provide collateral aid that can increase the work capacity of the project. Now, Cuba Posible is part of the Christian Centre for Reflection and Dialogue-Cuba (CCRD-C), founded more than two decades by an intelligent and tenacious Presbyterian pastor. To them we share a long-standing friendship and it was they who offered us a room to get the proper institutionalism of Cuba Possible and contribute to the success of the endeavor. However, I must point out that the project also has a direct relationship with the Inter Press Service (IPS) agency

LG: Right now Cuba Posible has a Steering Committee composed of Rita Maria Garcia Morris, Director of CCRD-C; Rev. Raimundo García Franco, founder of CCRD-C; Roberto Veiga and me. We also have a Board of Directors composed of the above persons and Aurelio Alonso, Julio César Guanche, Mayra Espina, Pavel Vidal and Victor Fowler. The Board is the living core of the project, as has the challenge of articulating a collective dynamic construction decisions.

How would the various specialists and intellectuals participating in Cuba Posible work?

RV: Cuba Posible will continue calling on all Cubans, whether on the island or abroad, including foreigners, who want to work without hatred for the present and the future of the country.

We will make symposia, conferences, seminars, workshops and meetings of dissimilar formats. We will have a publication with a web presence, a printed booklet quarterly, and a large presence in social networks. We work also to consolidate the existence of teams to study the most important issues of the country, so that modestly clearly contribute to the solution of social problems. For now, we thought that these teams will deal with the following topics: education, spirituality, forgiveness and reconciliation, work, economic development, redistribution of wealth, institutions, integration in Latin America, and the normalization of relations between Cuba and the United States and the European Union.

What different and appealing to the Cubans and the world could Cuba Posible have?

LG: Cuba Posible work will tirelessly to consider the future of the Cuban republic with creativity. We ask the questions that are of this moment, related to the major challenges that we live in the XXI century.

In his address to the inaugural conference of the project, entitled Cuba: sovereignty and future, Julio César Guanche made a crucial question, one with an almost cosmic potential. Referring to Marti’s statement “with all and for the good of all,” the essayist and political scientist wondered: Who are “all” in the twenty-first century Cuba? What does this “all” mean for institutional redesign Cuba is moving toward today? Having lived almost all political variations during the twentieth century-liberalism oligarchy, dictatorship, social democratic reformism, revolutionary nationalism, pro-Soviet communism, what should Cubans do with our future? Those are, in my opinion, the big questions hanging over the entire nation. We work to put these questions on the table, and calling on all Cubans upright in heart to find the answers and give them to society.

RV: Cuba Posible’s originality lies in its efforts to promote Cuba House, as the possibility of a more just and democratic nation, always thinking that we are not the only ones committed to making this dream possible but it is a matter of all Cubans. The principles that we believe should guide the construction of the Cuba House are the educational, cultural and spiritual development of Cuban society; project-oriented economic development and the common good; building an ever fuller citizen democracy; work in favor of Cuba’s relationship with all countries based on peace and cooperation; the ability to contribute to all this from the commitment to national sovereignty and citizenship, hope, solidarity, responsible freedom, social justice and the rejection of violence, either physical or made of words. Finally, we believe that the diversity of views on these principles is valid, but you must discuss them and reach a consensus, so we focus on the dialogue.

It is another uniqueness of this project, the fact of not wanting to dwell on purely theoretical valuations and abstract creations, but also to try to engage the political performance of the country and influence the social development. However, it should be noted that we do not intend to do so in the manner of a political party. We do not subtract the necessary merits of partisan political work and its important place in the social dynamics. But we believe that our work is different and that even the small contribution of Cuba Posible would help the Cuban collective consciousness, the citizen performance, a few partisan entities exist and to balance this.

Pito Abreu: Rookie of the Year of the American League

Stella SA celebrates its twentieth anniversary with a new product