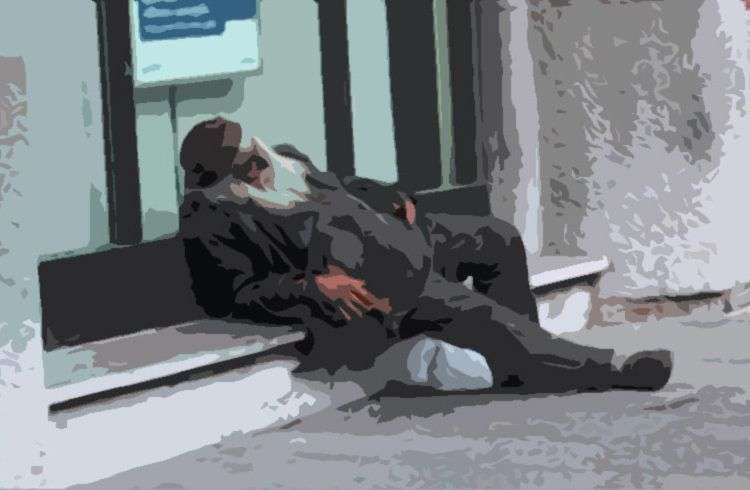 I dare not take the shot. I felt ashamed. I, standing on the sidewalk, camera in hand, looking at her from my height. She, dirty, badly dressed, lying on the grass, with her head on a battered suitcase. She opened her eyes and looked at me with glazed eyes. “Do you have a peso you can give me?” She said at last, with hoarse voice. I got disturbed a bit, I reached into my pocket. It had no peso only had five peso bills. I gave her one. She smiled: “It is enough to buy a bread and ham. Or rather, to give me a drink. “She gave a grim laugh. I must have looked disturbed a little, because then he said: “Do not panic, I do not bite.” I was filled with courage, I did what I had long wanted to do: talk to a beggar. Why is that? Why sleeping on the street? He shrugged. “¡What do I know! Life takes many turns. Ten years ago I had a house, but my daughter kicked me out. And now she almost never let me spend the night with her. She has a husband who says I’m a drunk. That man does not love anyone. I want to go to the East, but I have no money to take the train. There maybe I could find a daub, though it is falling. They wanted to put me in a shelter, but I escaped. I prefer to be free. And do not ask me anything else, I am sleepy.

In Violeta, my childhood village, there are no beggars. Everybody knows everybody, nobody sleeps on the street. There are very poor people of course, but they all have their roof. I saw the reports on television about the homeless in Africa and Latin America, I heard my father’s stories about their hardships before the triumph of the Revolution, and congratulated me for being born in a country and a time without so much injustice. When I was in elementary school, I thought I lived in the best country in the world. The illusion faded when I entered high school, right in the early years of the crisis. And in high school was the hit. One day I went with some friends to Ciego de Avila and saw a man with no shoes, begging for money on a street corner. I thought that did not happen in Cuba. When I entered college I already had many things clear. Life in the big cities can be difficult, nothing to do with the much more supportive dignified poverty of small towns with having less. My friend Felix, who was a nurse in a hospital, had a friend who had no home. He went from one side to the other with all their belongings. When he was on duty, Felix let her sleep in the infirmary. I talked to her a lot with it: she told me her story.

Everyone has the right to have a roof. That sounds cute. But the reality is sometimes tougher. Felix’s friend, for example, was not an uneducated woman. I think she had been a nurse, had a home and family. But an unfortunate series of events and misunderstandings took everything from her. She was a victim, at least in the version we had. And she had nowhere to go, whom to see, how to get her own space. It has always scared me the rare chance to stay with nothing, having nowhere to spend the night. I have a dream, rather a recurring nightmare: I arrive home, open the door and inside there is nothing: no furniture, no walls, no roof. And I realize that from that point I will be a beggar. I wake up startled. Now I look at the woman sleeping on the street and wonder how can a child leave out his own mother. Lester, who usually have more sense than me, I would probably say: “We have to listen to the child, would have to see if the woman is telling the truth, we should ask whether this is not the result of the actions of women “. But I think in the cold, on soil discomfort in hunger. I say, at least I gave her five pesos. But I know that does little, it solves nothing. And I’m ashamed.

Pito Abreu: Rookie of the Year of the American League