suarez
in Politics in Cuba
0 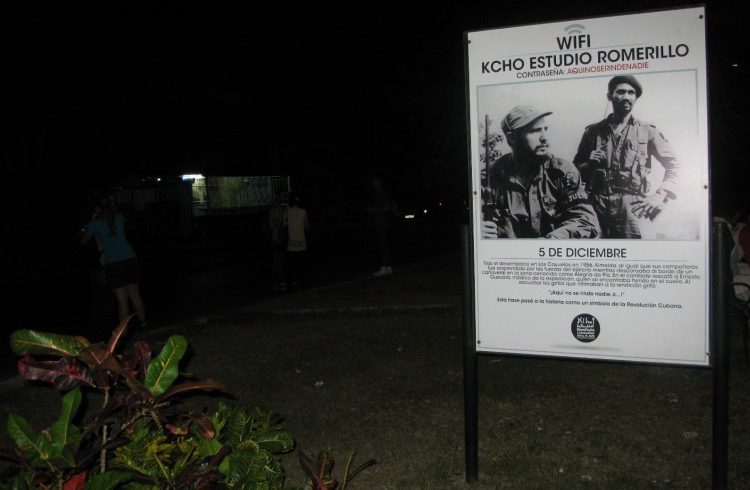 This is not the first, but one of the few occasions when Norberto entered the internet. He is not studying in college or working on some of the privileged centers with access to the Net. Before he had done a few minutes thanks to a pirate account that his father pays in La Lisa.  The same happens with Oscar, Aldo tells us the same. They live in different ends of the capital.

“It’s the first time I go into it without paying; without risking with the peddlers “says Norbert.

In this corner there are no peddler´s accounts. This is the corner of Alexis Leyva or Kcho, a visual artist than on January 8, 2014 reopened the doors of an ancient workshop near the Playa Bus Terminal turned into his personal studio: a Laboratory for Art.

But now the space, located in the district of Romerillo, west of the city, has become a social laboratory, a small-scale trial of which public spaces designed to provide wireless Internet Wi-fi could mean in Cuba.

From the corner to the universe

The horn, the smog of stoic rental Chevrolets, and the constant traffic of city buses to enter or leave the Playa terminal increase the feeling of heat. The impoverished neighborhood of Romerillo continues with the same environment of that song by Moneda Dura in which he emembered it as a kind of friendly favela. But now the community has new parks, and the walk to 120th Street, its main way rejuvenated ‘. Everything since Kcho came.

Today is the fact that free public internet was not started in the vicinity of luxury hotels in Miramar or in a park in El Vedado, but on this site outside the city.

In very specific moments as the most recent edition of the Fair of Havana or the International Ballet Festival are enabled services of this kind, but only to download billboards or information associated with the event. When is over the organizers had just picked up the cabin. That was the closest we came to an experience like that happening today west of the capital.

At night dozens of boys parade through the area and even coming from as far away as Marianao, defying public transport. Pee hours always find several groups of Internet diehards on weekdays. But: Friday and Saturday the influx triples.

The free connection via Wi-fi in Kcho Studio has been up for about two months, 24 hours, seven days a week.

Also the four computers in the school library provide the ability to navigate and orderly queues start from early. However dissemination of the service was zero.

Ana came from another municipality at the invitation of a local resident, hoping to finally have a contact with the web. She studied dentistry and unlike most her university does not provide an Internet account in any of her five years as a student.

Ana knows that first things first. This is essentially what differentiates a ghost of a child of the XXI century: Facebook profile. Like her many newcomers prefer to create, navigate or update their profiles on the largest social network. She spends a while, her Samsung is unresponsive, Server not found, Enter: try again.

“Aquinoserindenadie” is the password, will be notified. But that morning will also be a line against discouragement.

The Internet bussines walks through Havana with the same ease as the rest of the forbidden. Ernesto, a student of Telecommunications, knows that a clandestine monthly account can be paid up to 50 cuc. “Generally it is a network administrator in a state center who anchors the connection to his “customer “,” he says.

Speed is bad and excessive costly, but the Cuban who can, pays for it. He has no choice. The government prohibits its citizens from accessing the Internet from home. That is only referred to in the law for foreigners; provided they have contracts with the only telecommunications company on the island.

The National Library has a free navigation room for its members: a limited community of students, and intellectuals. The same applies to the UNEAC and the AHS. And who does not qualify in these categories, how does he reach the world wide web?

The truly great peddler of access to the Net is named ETECSA: it monopolizes and charges nearly five dollars an hour for a lousy connection. That represents a quarter of the average wage in Cuba.

“The connection here is not the best, but you don’t look a gift horse in the mouth,” says Ernesto jauntily. The search engine describes a hypnotic circle while the boy revises the conference which will assess their teachers in the next seminar.

Also, the wait is not as irritating.

Although outside the walls of the facility also comes the magic of Setpoint in some Internet can reach to sit in comfortable wicker furniture and are more protected from gangs, according to some present, haunting the place. Two guards guard the entrance and make rounds every half hour.

LEDs of laptops, smartphones and tables adorn the morning while they are waiting patiently the system returns the desired signal. They can spend hours in the stillness of night of the site before that happens.

This reporter was from 12:10 am until four am on Saturday hoping the blue Facebook interface on the screen. Intermittent appearances, but nothing to gloat profile.

However, it was easy to see that 70 or 80 young people accommodated in another part of the installation ran luckiest. Just in case you can reach the cafeteria in the study itself, open until late at night, and buy all coffee you can.

The Romerillo experience leaves more questions than how a coconut gets filled with water: why the Cuban government has not implemented options like this? A man has shown he can do this by putting his limited resources in terms of providing access to the Internet. How is it a powerful state could not?

Questioning collides with the recent statements of the Ministry of Communications for the First National Workshop on Computerization and Cybersecurity, last February 18. On that occasion the deputy minister, Wilfredo Gonzalez used in his speech more than once the word speeds.

Although he did not elaborate on the issue, the official said there is already a regulatory framework that will enable greater access to ICT by citizens; and highlighted the computerization process primarily has an economic and social impact event.

He also recognized the need to implement price policies that make connectivity services affordable, and improve the quality of the connection to provide democratic access to the network of networks among the Cuban population.

Internet access is not only beneficial to the citizen, but also for the government. Through the website people can speed up legal procedures and the provision of public services in general.

So if the highest government levels have added to their speech an attitude of progress raises another question, what prevents them from making their words come true?