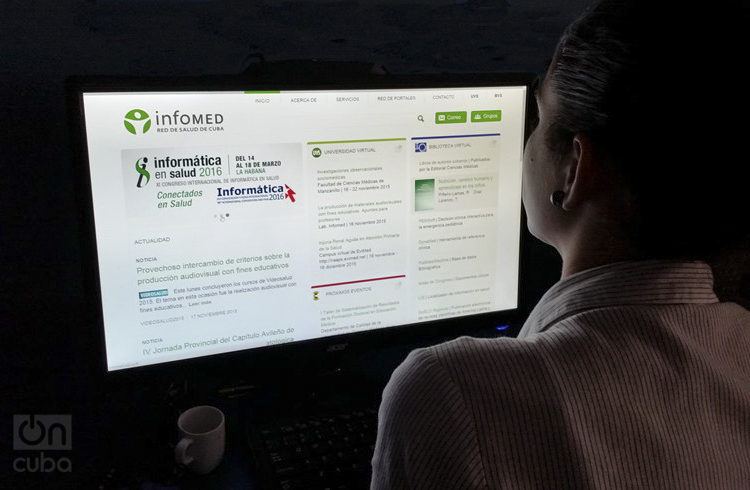 Very little has been published about the plans that the telecommunication authority has to roll out internet connection to people’s homes. According to recent statements by Odalys Rodríguez del Toro, director of ETECSA’s Havana division “a pilot test will begin to bring internet to homes in specific areas.”

These connections will be via fibre optic, thanks to an agreement with the Chinese business Huawei and “will advise about prices at the right time,” according to the Cuban News Agency.

The beneficiaries will be two People’s Councils in the municipality of Old Havana, whose inhabitants will be the first who can take out a broad-band service for their houses.

What follows this “pilot plan”? Little or nothing more is known.

At the beginning of June 2015 a strategy for the development of connectivity, whose authenticity has been neither publicly confirmed nor denied by the authorities, was leaked online. A timeline from the document began circulating detailing that by 2020 50% of Cuban homes should be able to access the internet on broadband ADSL connections.

Today there is only 27% internet access penetration in Cuba. It was also the country in America that was furthest behind in a ranking compiled by the International Telecommunications Union according to a report that compares the Information and Technology Communication Indices of 167 nations in 2015 compared to 2010. The island moved from 119 to 129 in the list which cross references access, use, competency and ICT skills.

Up until now, most Cubans who have access to the internet use it at their job places; or use it at public WiFi spots paying the onerous price of 2 CUC for an hour of connectivity, to access the web…

Among the few individuals favoured by access to networks from their houses, there are over 40,000 health workers who, between September and October of 2015, saw how their traditional, limited, connections became full-service, as Mayra Arevich, president of ETECSA confirmed in an interview.

These connections still depend on the archaic 56kbs modems that are almost extinct in the market and the copper wires of the landline.

Today’s Infomed users have 25 hours of unlimited internet use per month, but the speed is so precarious that many users feel that this ‘fixes’ nothing. The service is measured by time and not by the amount of data downloaded.

Pedro Urra insists that while the ADSL system is not widespread (due to ETECSA investments) the modified dial-up connection is still useful in terms of widening access to something that is already defined as a right. “Infomed has given many people the opportunity to exercise their right to access the internet”.

Another solution for quality access from home, estimates Urra, could be in the option of communal WiFi spots. “I believe that this is the only quick way for so many people to get internet in their houses”.

While there seems to be no hurry to significantly increase the much-desired advancement of the broadband, what remains for the majority of Cubans – after having handed over a couple of convertible pesos (CUC) – is sitting in the open air, on a park bench or on a wall in the WiFi zones. In Havana, this option will increase by 30 new spaces (two per municipality) in 2016, again according to the capital’s ETECSA director, Odalys Rodríguez.

ETECSA also said that it plans to provide WiFi connection “in the cafeterias, bars and restaurants that ask for it in the future”. Perhaps some of them are already making plans. Much depends on the prices with which the new the services will be provided.