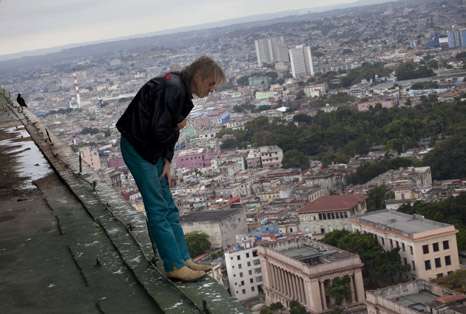 Last November, OnCuba announced that the French Spider-Man, Alain Robert, was looking for a Havana building to conquer it and thus increase the list of his challenges against gravity.

Two months later AP reports that the daredevil climber nicknamed “Spider-Man” will climb this Monday, February 4th, the emblematic Habana Libre Hotel in the very heart of Vedado neighbourhood with a permit by the Cuban authorities.

The 50-year-old Frenchman plans to climb the 27-story 126 meter tall building through one side of it.

This Friday, Robert inspected the building to have a design the strategy he will use to climb the walls using only his hands and feet, without any implements to guarantee his safety.

This is his fourth Latin American country where he climbs a building after going to Venezuela (Parque Central Torre, 224 meters tall) in 2002, Mexico (Santa Fé World Plaza Corporate Tower, 127 meters) and Brazil in 2008 where he conquered the Edificio Italia (168 meters) in Sao Paulo.

Buena Fe begins the year with moving the Dial

Contreras: “I won’t play against Cuba ever” (II and Final)

Contreras: “I won’t play against Cuba ever” (II and Final)