A strong injection is needed for concrete results, not efforts. 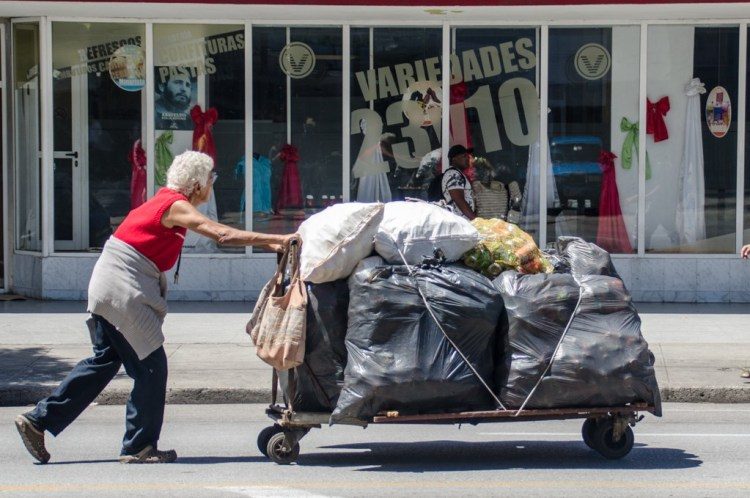 Economists propose ideas based on what has been learned, policymakers also propose ideas, politicians propose and implement. They rarely coincide, and they don’t have to agree on everything, but what executives perhaps don’t want to understand is that there is always a political time and that in Cuba time is pressing. Therefore, a strong injection is needed for concrete results, not efforts.

Exhortations and slogans were an essential part of a past time, and it can be said with satisfactory results, but the current context is different, and the measures to be applied must be different, more concrete, measurable and hopeful for the short term.

If we analyze some economic indicators, we will be able to realize the urgencies to which the current Cuban government is subject. 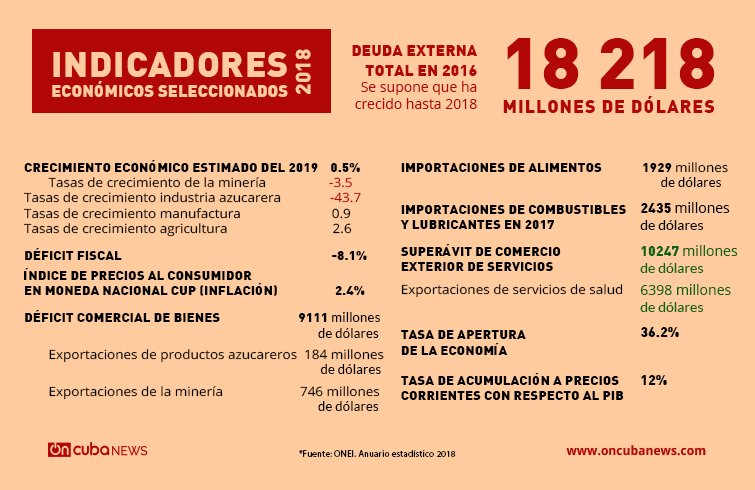 Rate of accumulation at current prices with respect to GDP

It supposedly has grown up to 2018

It is known that there are short-term or overdue debts with suppliers, which the Cuban state hasn’t been able to settle, and they exceed 1.5 billion dollars.

In the social sphere there are also pressures. Births will continue to decrease. The birth rate in 2018 was -1.0% per thousand inhabitants, but it is expected to be -5 percent in 2020. This indicator compromises the future workforce, against which the external migration balance also conspires.

An internal analysis of this last variable reveals the exit of highly qualified young people, in many cases university graduates, by tens of thousands in recent years. At the same time, people with more than 60 years now exceed 20 percent of the Cuban population of 11.2 million and therefore the expenditures that the state must make in social security are greater.

It cannot be ignored that the current government team carries out intense work, using methods of closer approach to the base, but it is necessary to think more as a country and achieve the results expected by citizens. Especially that they revive and rescue the confidence of the youngest sector of the population, where almost half are under 40 years old.

Last June 27 the Cuban authorities announced that in the coming weeks or months there would be more than 30 economic measures that would break the internal blockade. The question is whether they are more control measures or they would be aimed at increasing production of goods or services.

An inventory of measures that could give oxygen to the population and encourage those inactive productive forces that exist, could include the following, although it is unknown if they would be aligned or not with what the authorities are thinking:

1 Expand the list of approved trades for self-employment, or define a list of activities that could not be carried out privately, and leave to the initiative of the population the activities they would like to exercise on their own.

2 Create wholesale input markets with foreign companies or foreign commercial firms for all forms of ownership including the state. That would prevent the outflow of foreign currency to buy inputs abroad.

3 Remove the state tax on the United States dollar, where the CUC and USD quotes are equal, which would motivate that part of the remittances received by the population be changed in CADECA exchange houses, or in Banks, etc. It is already speculated that the CUC is trading at 1.05 for a USD. In other words, in the face of financial fragility, there is a tendency to treasure in USD.

4 Encourage deposits of USD in banks, through an incentive in bank interest rates.

5 Create special economic zones for Cuban citizens’ purchases in national territory with acceptable profit rates, for example 50 percent on the cost of merchandise purchased, not 240 or 300 percent. That allows more money rotation. As the country lacks foreign currency, that market would work in USD. But the state wins, doesn’t lose, and the population improves its purchasing power after it has received wage increases. It is not understood how other countries profit from the Cuban internal economic situation and the authorities are dedicated only to control, instead of being proactive.

6 The Law of Enterprises, the Law of Cooperatives are necessary laws for the legitimization of all forms of property. It is unknown if specific dates have been thought of or if they have just been announcements.

7 What is needed for the implementation of micro, small and medium enterprises, if they are possible, since they are endorsed in the documents that will govern Cuba’s economic life in the future? What is the delay or fear?

8 It would be attractive to approve exporting or importing enterprises that allow non-state forms to channel their inputs or sales through them. And consequently allow the largest state enterprises to go abroad to buy the goods and products they need. In other words, softening the state monopoly on foreign trade (few enterprises) should only be valid for massive purchases by the Cuban state such as food and energy sources, among others.

9 Foreign businesspeople would welcome the elimination of the employing agency for foreign entities, that is to say, allow direct hiring and collect taxes on salaries accrued by workers who are hired. That is one of the first concerns of foreign investors in the country.

10 It would propose greater proactivity in the search for external capital from Cuban individuals or families residing abroad. A law is not enough, and that is known by the Cuban authorities. As exhibitions are made to announce the investment opportunity portfolios to foreign entities, there could be actions through the Foreign Ministry’s office of Cubans residing abroad.

In conclusion, these are not the only possible measures to be studied. There could be numerous initiatives, but it is certain that some of these proposals would lead to the improvement of existing imbalances.

I insist once again that you have to look carefully at the Vietnamese model, in which many went from simple self-employed workers in the 1990s to today being foreign investors in the Mariel Special Zone. It is good to know life stories of many businesspeople in that country, which was in ruin in the 1990s and today is a very dynamic country in Southeast Asia, with a political model similar to that of Cuba.

It is very commendable that exports be encouraged, and the figures presented prove it, but only what the country produces on time and with quality can be exported. The world today is very competitive and that is known to Cuban executives.

It is still ignored that money is nothing more than a medium of change and that the real incentive is what can be done with it. Hence the recently announced ceiling price approach.

The media has now reported very reliably on the mechanisms that are supposed to prevent inflation. However, little or nothing is said about the measures to break the internal blockade.

No price juggling will take the country out of the imbalance between supply and demand if supply is not increased. If someone has thought he’s seen a sign of “ignorance” in that statement, then he should explain precisely what the “knowledge” behind it might be that allows giving economic rationality to the idea that a salary increase package can be put together without giving priority to a counter-measure (for a macroeconomic balance) that includes a national or imported supply response. Does focusing on a demand management approach by bumping and freezing prices right and left and relegating supply (beyond discourse) express “knowledge”? (1)

Cuban government invites opinions on phrase “thinking as a country”

Cuban government invites opinions on phrase "thinking as a country"