The atypical return to the classrooms in Cuba

With a mandatory mask and received by health workers at the entrance, hundreds of thousands of students returned to schools in central and eastern Cuba this Tuesday. 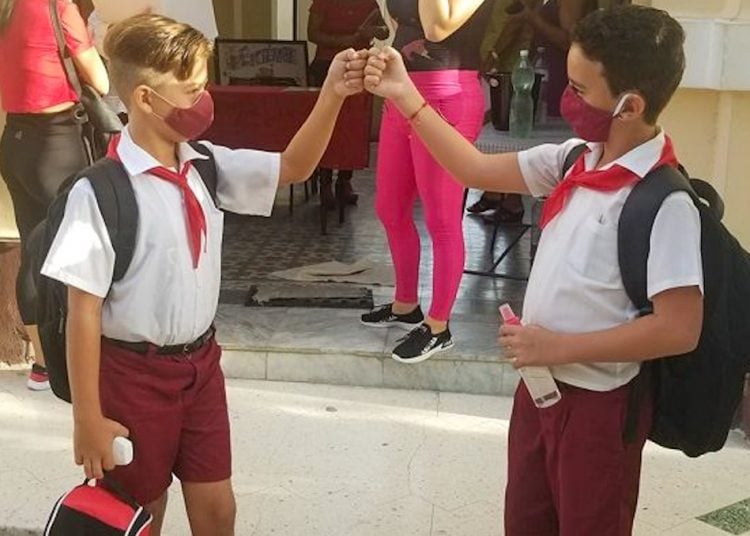 Except for Havana―the epicenter of the COVID-19 epidemic on the island―and a few other towns, Cuba returned to the classrooms this Tuesday amid a second wave of coronavirus infections after more than six months of an unprecedented early closure.

With a mandatory mask and received by health workers at the entrance, hundreds of thousands of students returned to schools in central and eastern Cuba this Tuesday. This atypical “back to school” also includes some western territories, where most of the active cases of the virus are concentrated.

The recent outbreaks of coronavirus will keep some 355,000 students from Havana at home, but also from six towns in Pinar del Río, Artemisa, Matanzas (west) and Villa Clara (center) with local transmission of the disease.

The capital’s universities will not reopen their doors until the health situation improves in the city, under new restrictive measures as of this Tuesday to try to control the coronavirus outbreaks in its fifteen municipalities.

The pandemic, with already 4,065 positive cases and 95 dead, has achieved what decades of the U.S. embargo and economic crisis have not been able to do: traditional massive parades, religious celebrations and schools have been closed, an alternative to which the government has resisted since the start.

Cuba, for which free and universal education is one of the main pillars of its Revolution, began the 2019-2020 school year last September with almost 2 million students and some 9,000 more teachers than in the previous period.

Faced with the outcry from parents and the rapid spread of COVID-19 cases, classes were interrupted at the end of last March with the original idea of ​​resuming them a month later.

The restart of the school period was in suspense after the April peak, when the island reported the highest number of cases during the first wave of contagions.

In June the government declared the disease controlled and announced the start of the national reopening plan, which included a return to school this September, when the country was expected to have advanced the de-escalation of quarantine.

However, recent outbreaks in the western area have jeopardized the return to normality, with daily figures exceeding the April peak, especially in Havana.

Even so, the authorities continued with the return to the classrooms in the rest of the country, in the third and final phase of de-escalation. The western area has been practically isolated since this Tuesday.

The 2019-2020 school year is restarting this Tuesday and will conclude on October 31, the month in which the entrance exams to higher education will be carried out, postponed since May. The 2020-2021 period should start in November, according to the official schedule.

Like the reopening, the “back to school” in Cuba will also be in stages: the students from the provinces who do restart classes will not begin at the same time, nor will they stay in the centers at the same time.

Cuban Minister of Education Ena Elsa Velázquez recently explained that secondary, pre-university and polytechnic education reorganized their calendars so that students attend on alternate days and thus ensure spaces for nearby primary schools that need to decongest their classrooms.

After a previous tour of 1,500 centers throughout the country, Velázquez acknowledged that problems with the water supply persisted in many and in others the improvements scheduled during this six-month break had not been completed.

Preventive measures include the mandatory use of masks for students and teachers, taking the temperature, hand disinfection, the prohibition of entry with respiratory symptoms, the closure to outsiders and different recess and lunch hours.

The authorities also affirmed that they will carry out random PCR tests to detect possible asymptomatic cases.

“If we do it well, we can advance in the school year,” insisted Cuban President Miguel Díaz-Canel in a meeting with his ministers.

Controversy in the networks

Despite the measures announced by the government and the campaign in the state media on preparations for going back to school, many Cuban parents are reluctant to send their children to school, despite the fact that on the island education is compulsory up to 14 years.

As is customary since the arrival almost two years ago of the mobile Internet in the country, social networks are the main spaces of controversy and accumulate comments against the in-person restart of the school year in favor of televised classes, at least until the situation stabilizes.

“The country’s leadership must think better this decision. The last days show that the situation is getting out of control in the country. A transmission event in a school would be disastrous,” said a user in the comments section of the state website Cubadebate.

Other Internet users promote the hashtag #MisHijosSeQuedanEnCasa (My children stay at home) on Twitter against a measure they consider “hasty,” although it is to be expected that the vast majority of Cuban parents do send their children to school.

During the first half of September, Havana will be under the strongest restrictive measures since the beginning of the epidemic, including an unprecedented night curfew, the limitation of the movement of people and cars and the prohibition of entering and exiting the city.

As in the rest of the territories that will not begin in-person classes, Havana students will receive the subjects on television, which scheduled classes for all levels, including special education and art schools.

The only exception in the capital will be state day-care centers, which have not completely closed (although they have reduced their enrollment) even during the worst of the pandemic.