They demanded yesterday a dialogue with the authorities of the sector as a result of what happened in the San Isidro neighborhood. 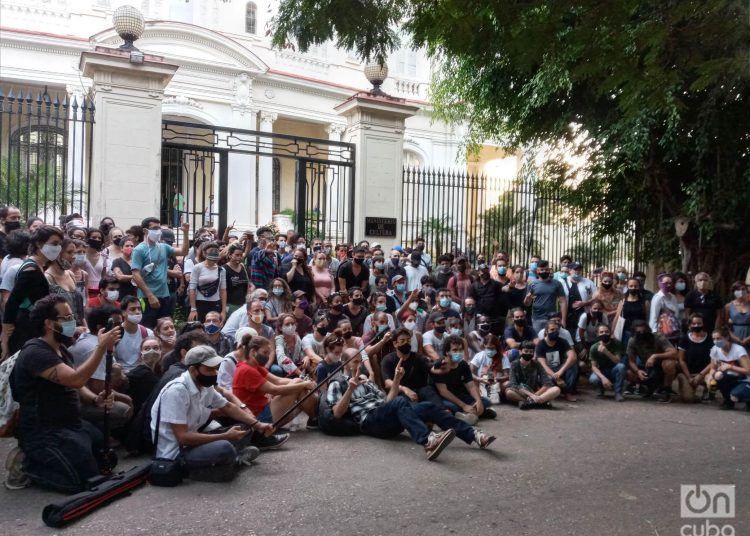 A group of young Cuban artists and activists met as of noon Friday in front of the island’s Ministry of Culture to demand a dialogue with its highest authorities as a result of what happened yesterday (this Thursday) with supporters and members of the San Isidro Movement, who were in peaceful protest since November 18 and were removed from the place by police forces for not complying with the established protocol due to the COVID-19 epidemic. According to our correspondent in Havana, who is in the place, at this moment there are around one hundred people at the headquarters of the Ministry of Culture.

The protesters, a very heterogeneous group of artists, have stated that the main objective is “to express their solidarity with the San Isidro movement and their concern over the threat to their freedom of creation and expression.” The first ones appeared at around 11 in the morning and some managed to speak with Deputy Minister Fernando Rojas. Starting then they have begun negotiations to establish a dialogue between them, for which they are trying to coordinate the place, the moment, the number of participants and the officials with whom they wish to meet.

Yunior García, playwright, who has acted as an interlocutor with the Cuban authorities, said to our correspondent that at this moment there are several groups in the union and they have a general proposal: to meet with Deputy Minister of Culture Fernando Rojas to present demands, make clear their solidarity with the San Isidro Movement and request the release of the members who are detained. Each of the groups also has another set of demands of its own. At the moment they are waiting for the response of the officials to organize the meeting, and if not today, they will make a statement explaining their demands and concerns, Yunior told OnCuba.

Earlier, in a public letter, more than 100 artists had urged the authorities to enter into a dialogue with the group that was on strike and peaceful protest.

Until now, the atmosphere is calm and no violent incidents have occurred.

During the evening hours, renowned Cuban filmmaker Fernando Pérez and actor Jorge Perugorría (Pichy) appeared at the scene. “I found out that since the morning you have been here, Pichy and I are here, to tell the Ministry of Culture to receive you and that this will be the beginning of a new language that Cuban culture and Cuba need,” said the filmmaker.

For his part, Perugorría said that he believed that it was “the time for dialogue and for you young people to be heard, and we are going to work for that.”

In response to questions from the foreign press that is at the headquarters of the Ministry of Culture, the director of Clandestinos, Suite Habana and Martí, el ojo del canario, among other emblematic films, said: “This direct dialogue with young people and that they be here has been needed for a long time; they are recovering that spontaneity that I experienced in the 1960s and that, somehow, had been lost. There is diversity, there are many criteria and you have to attend to them and listen to them, they have to have space in this nation. It is a moment that had to come. It should not have come to this if they had listened before, but it is good that they are here.”

Jorge Perugorría, the most international of Cuban actors, pointed out: “We are here so that young people are heard. I think it is an important moment, we are working so that this dialogue can take place, we cannot allow a generational break within Cuban culture.”

OnCuba asked the actor if he was aware of the young people’s demands and if he would be willing to mediate for them, “in some way we are here supporting the need for this dialogue, we don’t know the demands they have but we do know and are aware of the need to be heard, their demands have to be taken into account,” the actor replied. “This should generate a debate of ideas, it is important that youth are part of the Ministry of Culture, that they are not isolated and that they can claim all their rights from within. We must create a work schedule, we cannot get carried away by emotions, by passion, because that can lead to confusion. We must create a work team and that it not be just a day of meetings, but to create a work agenda so that young people are heard, which is the fundamental reason why I am here,” he concluded.

At around 9 o’clock at night, 30 members of the group entered the Ministry’s headquarters, prior agreement with the authorities to have the requested meeting with Deputy Minister of Culture Fernando Rojas. Fernando Pérez and Jorge Perugorría will also participate.

Earlier, Katherine Bisquet, a journalist and member of the San Isidro Movement, read the claims that, she explained, had led them there: “As part of Cuban citizens, we claim the right to have rights. We demand the compliance and guarantees of these rights.” And then she listed them: “Right to freedom of expression. Right to free creation. Right to dissent.” Then she listed some demands, among them “review and compliance with the due process of Denis Solís; that the artist Luis Manuel Otero Alcántara be allowed to return to his home. Cessation of harassment, repression, censorship, discrediting and defamation by the authorities and the official media of the Cuban artistic and intellectual community and all citizens who dissent from State policies; recognition and respect for independent positions, no more police violence, no more political hatred; let love and poetry unite this people,” she concluded.