The girls, neighbors of the Havana neighborhood of Jesús María, were returning from the Quintín Banderas School, when the balcony of a building in demolition collapsed. 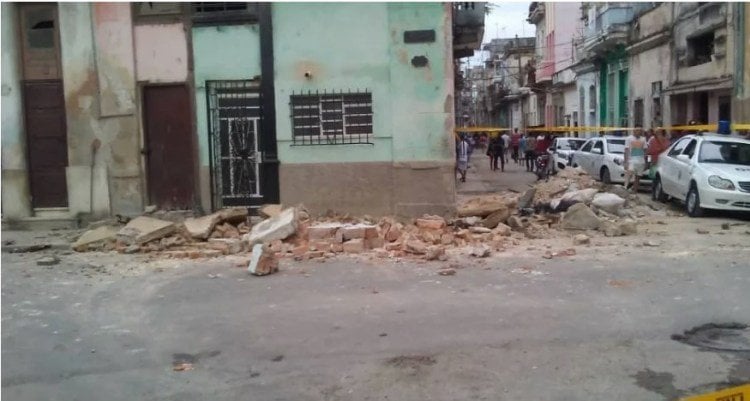 Photo of the collapsed building that killed three girls in the Jesús María neighborhood, in Old Havana, on January 27, 2020. Photo: Raúl Rodríguez/Facebook.

Three girls died this Monday in Havana as a result of the collapse of a balcony of a building in the Jesús María neighborhood, in Old Havana, the Cubadebate site reported, citing the Facebook profile of the Canal Habana TV channel.

The girls, neighbors of that Havana neighborhood, were returning from the Quintín Banderas School when the collapse of part of the building occurred, according to posts on the social networks and independent media that reported the incident.

The neighbors of the place said that the old building was subject to demolition, but the works stopped and those responsible gave no explanation to the community. This information has not been confirmed by official sources.

According to Cubadebate, the victims of the collapse are María Karla Fuentes and Lisnavy Valdés Rodríguez, both 12 years old, and Rocío García Nápoles, 11 years old. The publication says that after the tragedy, the main authorities of the province came to the place.

*Caption: Very sad day for the Jesús María neighborhood, in Old Havana. Three 10-year-old girls died from the collapse of….

“I knew it when I got to the neighborhood. The neighbors felt hurt, moved. And although for some a collapse in the neighborhood is no longer astonishing, it does pain very deeply all those who lose innocent human beings who are beginning to live,” wrote Rodriguez, who also regretted the poor state of housing in the neighborhood, which he considered “alarming.”

He added that in his block there are several buildings in danger of collapse and some demolished, without being handed over to any company or family. “As the years go by they will end up being buried,” lamented the journalist and editor of the sports section of that station.