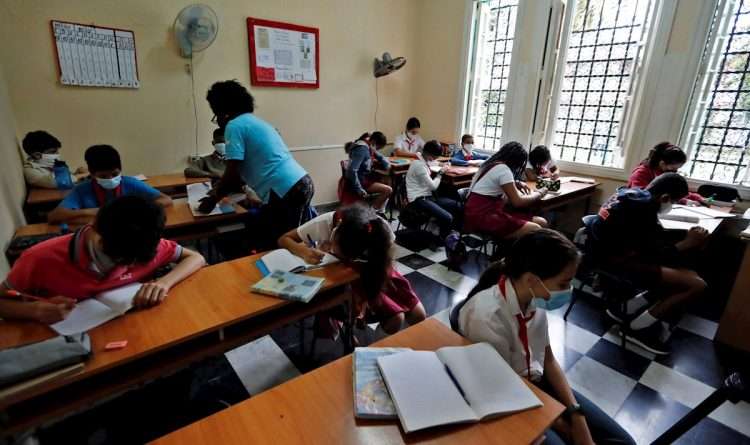 A teacher attends to her students in a school in Havana, after the resumption of in-person classes on November 8, 2021. Photo: Ernesto Mastrascusa/EFE.

Cuban students obtain results above the regional average, according to a study of the educational systems of Latin America presented this Tuesday by UNESCO, which urges Havana to maintain its efforts in this area.

In third-grade Mathematics, Cuba obtained 751 points compared to the average of 698. In addition, the study found that three out of every four Cuban students are above the lowest level of performance.

In sixth grade, Cuba achieved 689 points, a figure similar to the regional average (696 points). However, it has a higher proportion of students in level I (53%) than the region (49.2%); but in sixth-grade Science Cuba obtained 779 points, a score higher than the regional one (702 points).

In addition, the proportion of students in level I of performance decreases significantly (17%) compared to the region (37.7%), and also increases the percentage of those who are located in level IV, with the highest performance (24.4%), which corresponds to four times the average reached by the region (5.9%).

The coordinator of the Laboratory of the Latin American Laboratory for Evaluation of the Quality of Education (LLECE), of the Regional Office of Education for Latin America and the Caribbean (OREALC/UNESCO Santiago), Carlos Henríquez, pointed out that Cuba’s challenges are to achieve “a more inclusive and equitable education.”

Henríquez considered that the country must “recognize the importance of gender equality and cultural diversity” and “promote educational opportunities so that each and every student has the fundamental learning for their development.”

Cuban Minister of Education Ena Elsa Velázquez Cobiella affirmed for her part that the results of this study, together with other national analyzes, will serve to “raise the quality of Education in the country.”